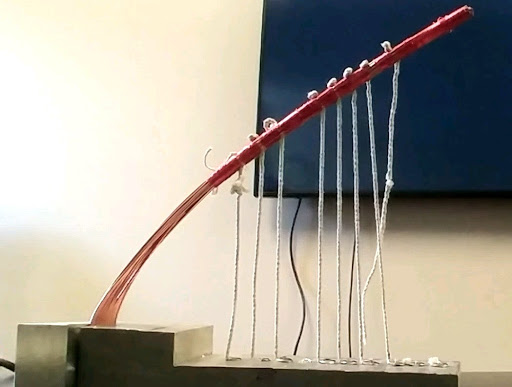 Utility. Function. Upcycling for the sake of preserving the planet. My project has nearly none of those qualities. What little utility it has is eliminated as soon as you use it. Its function is better served with an app on a smartphone, and while it is upcycled, it is manufactured in such a way that you can’t replace integral components without severely altering the aesthetic, rendering it disposable.

Concerning aesthetic, it has some nods to bridge design. Large bolts in the rear, clamping the copper “cables” into the stem are reminiscent of the large rivets found on metal bridges. It goes without saying that the curve with cotton strings appears as a suspension system.

A less apparent design consideration is the brachistochrone curve (or the poor attempt at assuming such a curve). It has a subtle time element that supplements the intent of tracking time that the entire device is built around. The device tracks time with cotton strings. A brachistochrone curve equalizes time; two objects dropped at different points on the curve will roll to the center at the same time.

For fabrication, I had a difficult time finding materials for the arch that would hit the curve intended while still “bouncing back” to a vertical position. In fact, I never did find such a material. I went with copper wire because it was available and did have the ability to be bent into the shape desired. The rivets did not set well, and I had to adjust the strings through the arch wire multiple times (further altering the shape).

When we applied the aesthetics to objects in class, it was suggested to my group that we include the aesthetic of bamboo rod “swords” as they do in dojos (we drew “martial arts bicycle”). I liked that as a method of incorporating strings into the arch, so I wrapped the collection of wires in the coated wire used to create electric motors. Layers, Jerry, layers.

When it finally came together, I brought it with me to present to my pod. I said something similar to what I said in this post, I presented some images, I showed the curve, then I cut the strings. I cut the strings, the copper held its shape, and I had to artificially “spring” them back to the vertical. The aesthetic changed, the utility was gone, and I had not remembered to take a “before” photo.

The final aesthetic resembles the worst sailboat you could ever buy. Sharp corners, tall ragged sail, and heavy metal composition (KISS). It is now basically a paperweight. Not the worst paperweight I have ever seen, but certainly no Picasso. To be fair, I don’t think Picasso ever worked in office supplies.