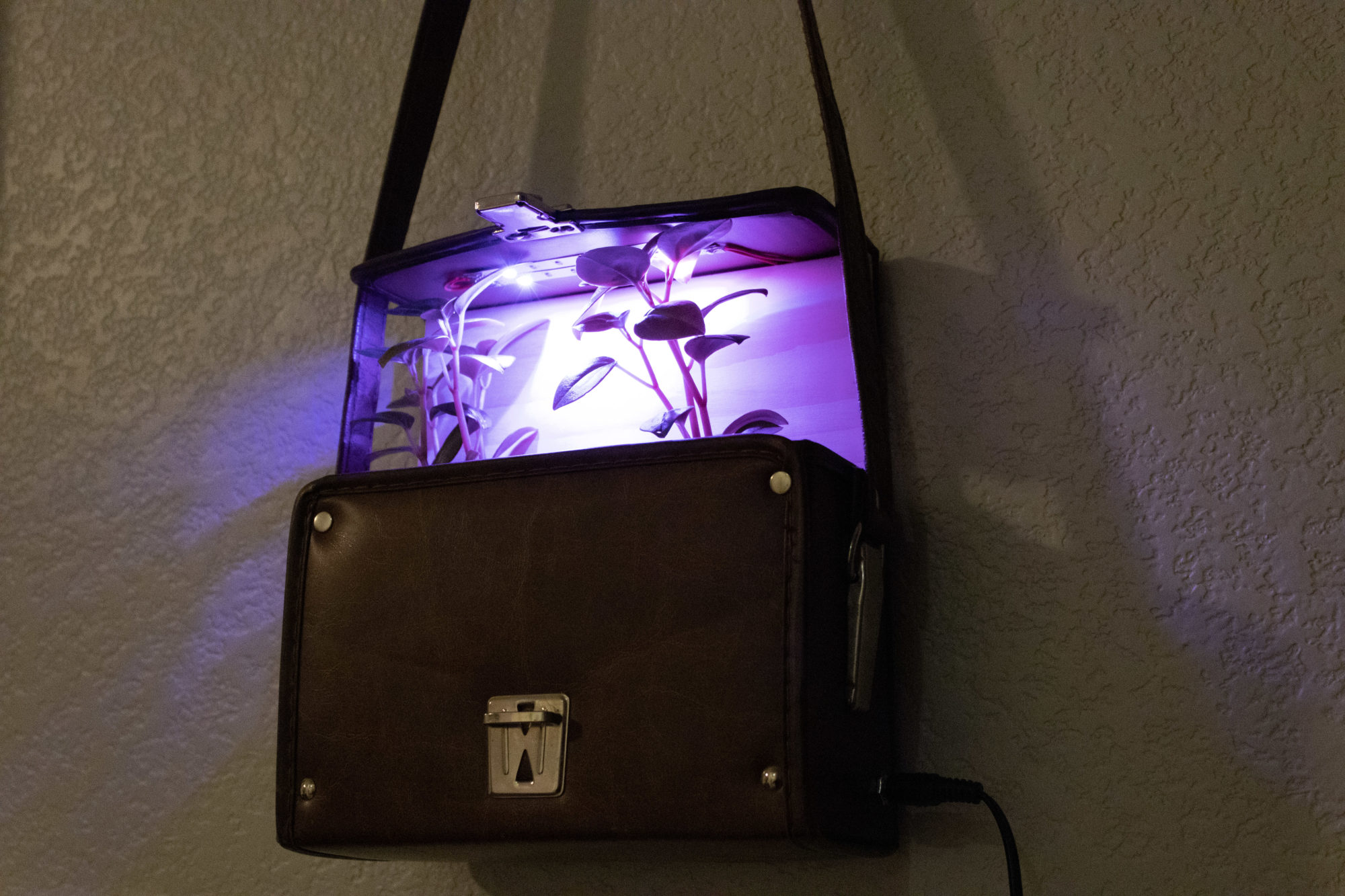 The upcycle project is intended to get our feet wet in creative thinking. Its purpose is to create something artistic or functional or both out of unwanted materials. This means creating the project out of as many reused materials as possible, and trying to eliminate the need for purchasing parts or supplies. I started with a materials first approach, which lead me to try and use wine bottles to make a series of terrariums. When this didn’t work, I went on to try another plant based project because I had already selected and purchased them. Other than the plants, I used entirely materials that I already had in my apartment to build the camera bag planter. Although it wasn’t the project that I had planned on, it still turned out well and I’m glad to have made something that looks nice in my apartment.

When we were tasked with this project, I spent a while thinking about the task and what I wanted this project to be. My biggest constraints were that I wanted to make something that I wanted to keep. To me, there is no point in upcycling materials just to have them end up in the garbage after a lot of work. Next, I started thinking about the materials that I had on hand. Because my apartment is decorated in a less than classy way, I have a significant amount of wine bottles and other glass bottles at my disposal. Combining this with the “indoor plants” aesthetic that I had explored earlier in the semester, I thought about making terrariums as a possibility. One that really caught my eye is this set:

Another one that I found really cool is this funky geometric designed terrarium that houses moss:

The next plan was to combine the terrarium idea with a wine bottle holder of some kind that would be mounted to the wall. This kind of rack was what I was initially interested in:

From these ideas, I had a pretty clear direction which just left cutting the glass bottles and prepping the holder. As I will talk about later, this did not work out for me. So it made me totally pivot and change my plan for the project. When the glass didn’t prove possible to make cooperate, I was left feeling really unsure about what path I needed to take. This lead me to try and figure out what skills I had and what resources I had on hand that could be used to salvage the project. I still wanted to make something functional that included the plants that I had already bought, but beyond that I was left without much of an idea. After some brainstorming, I was reminded of the fact that I have been upcycling vintage suitcases into speakers for the last 5 years. An example of one of the speakers that I built is shown here:

Along with building these upcycled suitcases, I had purchased an old camera bag ($9) a couple years ago to try and turn into a miniature version of the speakers. However when it arrived, it was much smaller than I had anticipated, so I couldn’t use it for its intended purpose. As a result, it was sitting around gathering dust in my room since early 2018. Therefore I decided to take the vintage camera bag and try and work it into the terrarium / plant holder idea.

This project took a sharp turn near the end of the process. I had collected wine bottles, purchased a glass cutter, collected and cut into a wooden mount and started cutting the bottles before I realized that it wouldn’t be possible. My intended vision had been based off of using a standard sloped wine bottle holder design to hold the terrariums. I picked up a really cool looking piece of wood while I was out on a hike and had purchased the hole saw necessary to cut 1.5″ diameter holes through the wood. I then went on to cut the bottles to the correct shape. This meant that I would score the bottles along a marked line with the glass cutter and then heat and then rapidly cool them to make the glass break along the score. The first 2 bottles that I tested resulted in shattering in multiple places outside of the scored lines. I then tried to make the temperature transitions smaller which only resulted in nothing breaking at all. Next, I tried the technique where a piece of twine is soaked in acetone and set on fire while wrapped around the line that you want the bottle to break on. Once the twine has burned away, the bottle is dunked into ice water. This causes a temperature change right on the region where the twine was burned, supposedly causing a break. Unfortunately this resulted in absolutely nothing over the course of several hours of attempts. Next, I went back to the first process and continued to shatter more and more bottles in my futile attempts to make an open terrarium/ planter. Although I was really safe when handling the glass, I am surprised that I didn’t get cut just from the shear volume of bottles that I broke.

As discussed previously, I was left with basically nothing other than the plants that I had purchased and just a couple of days to finish this project. This lead me to assessing what I had on hand and what skills I had. My vision was almost exactly what the project ended up being, although with more time I might have mounted it to the wall some way other than by the shoulder strap.

I wanted to create something practical, that fit within my room both in terms of space and feeling and I wanted to do it in a beautiful way. I don’t think of myself as much of an artist but I do believe that when I am building something I must strive for beauty, even when something purely practical is called for. Therefore, I tried to mix a minimalist aesthetic with the indoor plants aesthetic that I had explored previously. Also I needed to include lights, because these plants cannot handle direct sunlight, but aren’t completely low light plants.

Because I have a decent amount of experience working with vintage leather containers and a really clear vision in my head, I got right to work on the project without giving it too much thought or planning. It’s unfortunate that the project that I wasn’t able to do was the one with a bunch of sketches and design ideas and clear inspiration. However, when I’m feeling confident and I have the resources at hand, I would much rather go straight into building something than to do a ton of planning. This obviously is a limited thing to experience as an engineer, because I promise I am normally more careful in my design process.

There was only one real decision that I had to grapple with in this process, and that was deciding how to plant the two plants that I had. The original idea was to make an inner container that was removable and perforated that I could fill with soil and would allow for proper drainage when I watered the plants. The other idea was to just have the two plants in their own pots suspended by a piece of wood in the center of the bag. In the end, I couldn’t find a material that could be feasibly upcycled into the inserted planter, and I did have the leftover balsa wood. Therefore I went with the second idea. Plus it helped make for a minimalist feel by keeping the simple wood look going. Below is a Solidworks sketch that I used to laser cut the lower piece of balsa wood:

Cutting a hole for the power inlet

* The LED strips work by connecting a high voltage to the +12v channel and then running whichever color or combination of colors you want to the ground line. With these cheap LED strips you can get a decent range of colors. I chose purple by running blue and red to ground.

The planter came out really well and will work perfectly for these two little plants! The purple light is great for growing most plants and is more efficient than white light because plants just reflect green light. It doesn’t take up very much space but also provides a nice little light for that corner of my room. This is also great for the plants because these are very sensitive to direct sunlight, so it is good to give them their own dedicated more gentle light.

I feel really good about the mixture of aesthetics that I pulled off here. I kept the design fairly simple and minimalist while mixing in the plants and the lights. I think that it is a good combination of art and functionality. In terms of what I was talking about earlier in the vision section, I feel that I accomplished creating something beautiful. I get that often times art should be useless, but as an engineer, what makes me feel best is to strive for beauty mixed with functionality.

I think that I am going to try and build the insert so that I can actually pot the plants inside of this. Otherwise, I would move the lower wooden insert down lower so that the plants aren’t as crowded towards the top of the box.

In the future I may set up a mounting system other than the shoulder strap that I am currently using.

Video will be posted here when available.