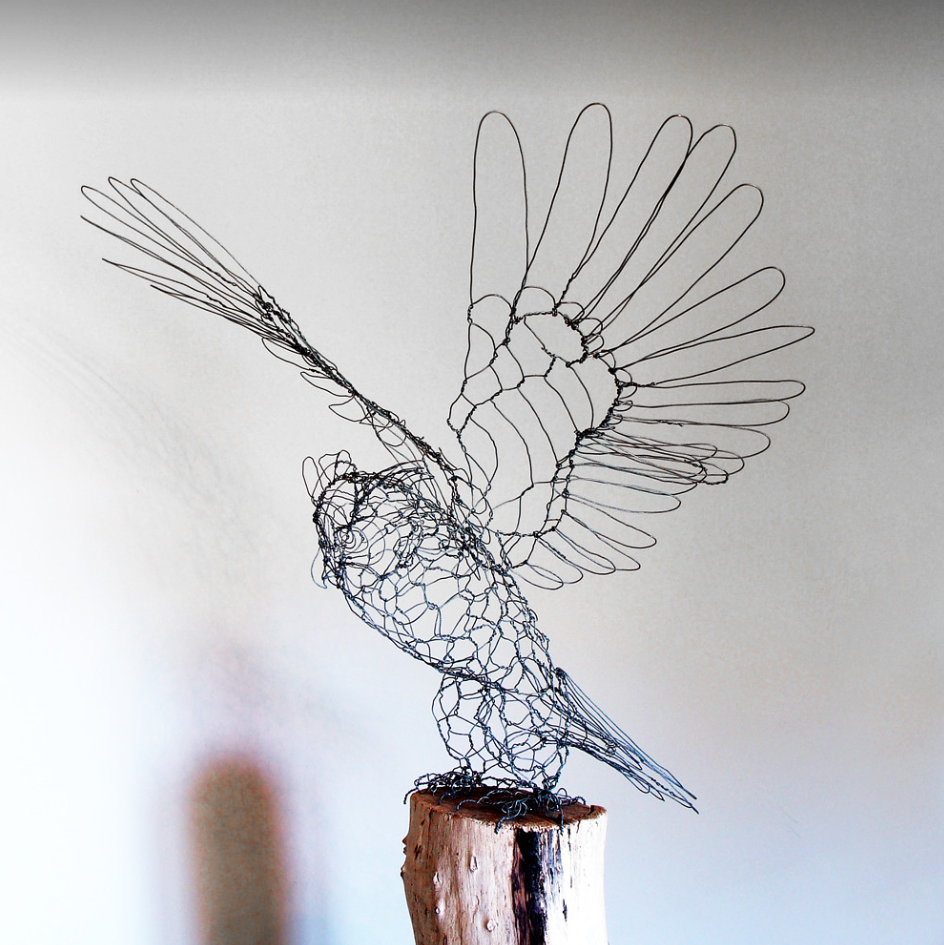 During the fabrication process of the previous sculpture for my Upcycling project, I actually really enjoyed working with the chicken wire frame – both in terms of manipulating it into a form I desire, as well as the intricacy and detail a wire frame can offer. I also have a lot of leftover wire frame said project. Continuing on with the sculpting of the previous project, I will be creating an owl sculpture with chicken wire, incorporating the aesthetic of the bare wires and flow of the woven wires. I am drawing heavy inspiration from sculptures of similar form by artists using a similar medium, shown below:

These artists use the wire to mimic the natural form in a way that is fundamentally abstract, forming shapes and lines where they usually wouldn’t be. There’s a level of intricacy and intertwining that is hard to capture in other mediums besides this wire-frame type of sculpture, and complement the dynamic portion of the project very well. Specifically, either the wings of the owl will flap or fold, or the head will radially move, tracking movement in front of it (time allowing). The motion is controlled via servos which are linked to an Arduino that sits inside the body cavity.

In terms of aesthetic, the primary aesthetic I want to shoot for with this project is something that is contemporary as well as surreal – the sculpture made out of chicken wire fence is meant to both model something realistic, but also be constructed in a way that the form is ‘otherworldly’ or unnatural. Moreover, I want the piece to construe a meaning or inherently represent something beyond the form and structure. Generally, the contemporary aesthetic incorporates a more modern complex message into the ‘meaning’ of any given piece. Generally, something with a contemporary aesthetic is making some semblance of social commentary or is meant to intrigue or lead the viewer into further interpretation. On the other hand, a surreal aesthetic generally rejects a more rational interpretation and to remove itself from the conventional. Surrealism is an aesthetic that tries to move beyond the general perception of ‘reality’ and instead uses the uncanny to construct meaning.

For the sculpture, the form and structure will be how the contemporary aesthetic is conveyed – the usage of the material, form, and the construction of the sculpture all help represent a more industrial and inflexible theme, while also expressing flow and movement via woven wires. On the other hand, the dynamic portion will express a more surreal aesthetic – the sculpture will have a relatively unnatural and unexpected set of movements, which helps bring to life something that looks inanimate.

The frame of the sculpture will be constructed from interwoven wire and formed into the desired shape. I was initially deliberating between using the natural formation of the chicken wire fencing, but ultimately will choose not to since it will reveal too much of the interior of the sculpture, as well as possible issues with maintaining the structure of the sculpture. Below are some initial sketches and design deliberations, as well as loose prototypes I began with: