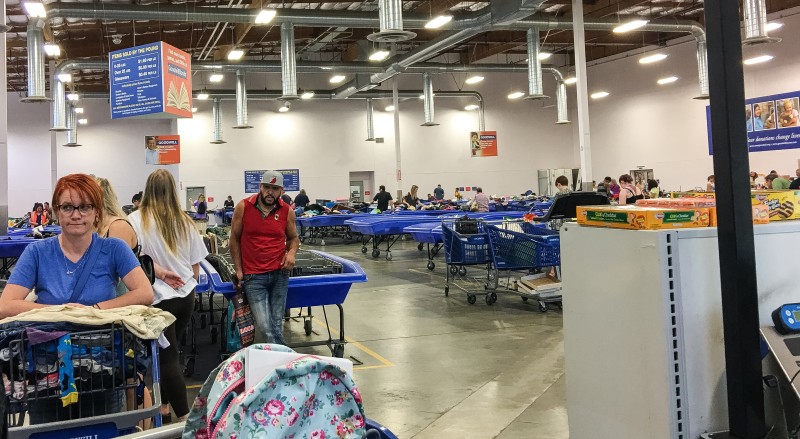 I’m from Portland Oregon and as a result, my aesthetic roots run deep with hipster designs. My whole time growing up I was surrounded by a constant barrage of the bohemian, industrial and eclectic vintage styles that come from the hipster aesthetic. While I never completely prescribed to the hipster aesthetics, it was hard to avoid having them become part of my life. Colorado has evened me out a bit, but many of the styles that are prominent in Portland are still pleasing for me today.

One of the defining Portland experiences is going thrift shopping or “thrifting” as a result many prominent styles are eclectic and random because everything was pulled from a bin. I was much too uncool to partake in most of this, but my sister and many of my friends dragged me along to dig through bins of unwashed used clothing. Here is an image of the goodwill “Bins” where you can find treasures by the pound provided you bring your own gloves.

While the eclectic styles featuring muted mismatching colors never rubbed off on me, the industrial looks that dominated the city certainly stuck with me. One place that comes to mind is a restaurant called TILT Burgers, they went full on for the hipster industrial vibe. All comfort was sacrificed in the name of their aesthetic. The restaurant has an old fashioned piece of milling equipment in the middle of the room, all surfaces are either black painted steel, plain wood or concrete, even the urinals are an unpleasant mess of sheet metal work. I think that in the pursuit of their aesthetic,  they sacrificed too much, but the food is absolutely amazing so I go regardless. But even though I complain about the sacrifice of comfort, some features of the aesthetic are really enjoyable. I even used one of their shelving units as inspiration for my own speaker shelf a while ago.

So as much as I hate how corny it sounds, one of my major design aesthetics is industrial chic. It is everywhere in the town that I grew up in and there is something really appealing about apparent practicality of the design. Although in reality a design using this style may be more expensive, less practical and less comfortable, on the surface it doesn’t feel that way.

Another major aspect of my aesthetic roots in the bohemian style. While this has a lot of overlap with the industrial chic look that I just talked about, the presence of “reclaimed” and re-purposed items is very important here. I will admit that I have turned an old pallet that I found into a plant shelf with a built in light, and that basically anything that I have built for my apartment has natural wood. Like the previous style that I looked at, this aesthetic features a lot of useless and even impractical elements. For example, the plants everywhere, including on and right next to the bed are an obvious feature that get in the way. Also no one would ever have a cutting board on their bed with a tea kettle and a potted plant on it, but it is still really nice to look at.

I think that while form is very important, it shouldn’t get in the way of function. As a result, while I am heavily influenced by these hipster aesthetics, I have a hard time designing things that get in the way of their own function. That may be engineering school beating the creativity out of me, but I stand by it nonetheless. While I’m no longer directly designing with these aesthetics in mind for this project, they certainly heavily influence my own design choices now and will continue to do so for a long time.