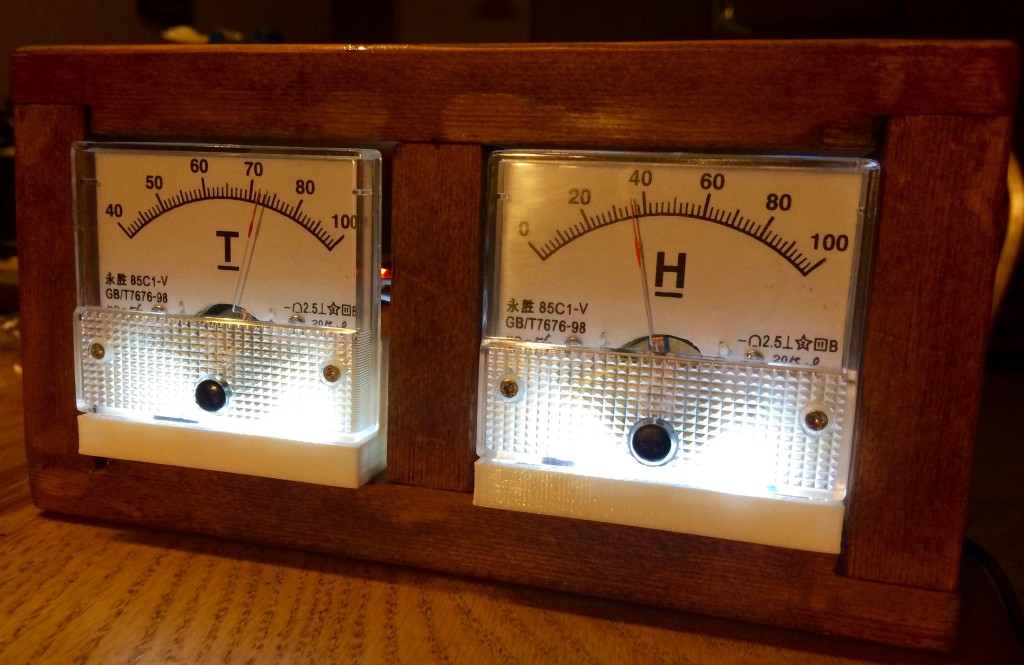 For my upcycing project I decided to make a home weather station from some recycled hardwood flooring and some spare electronics I had around the house. To start I used a DHT11 sensor breakout board to sense the current temperature and humidity. These values are read by an Arduino ProMini ($2 from sparkfun’s annual sale a few years ago).

Next, I chose to use two analog voltmeters to function as a display. I chose to use analog display to give the weather station a 1960’s engineering aesthetic. The output of the voltmeter can be set by varying the duty cycle of the arudino’s pulse width modulation output. I really wanted to use a wifi module to display the current chance of snow and outdoor temperature, but I didn’t have one on hand and figuring out the technical side of it is likely out of scope of this project.

The design process for the home weather station I built was more iterative than linear. Originally, I planed on using a single piece of barn wood as a faceplate. I intended to mill out two pockets for the indicators and mount the device on the wall – similar to an old fashioned barometer. However, after visiting the wood shop, I discovered that my design was not feasible. The wood was too weathered to be cut with any consistency and the radii that I had called out in my drawings were more appropriate for aluminum than wood. On a mill it is relatively easy to program a tool path to cut a pocket, but the makerspace at the idea forge only has a manual router. I also learned that with wood, it’s difficult to use a router bit that is smaller than 3/8″ diameter. As a consequence, I redrew my design so it would be made of six rectangular slats of recycled flooring.

The flooring was slightly warped and the surface finish was rough so I refinished the board with a manual planer. I had never used a planer before – I was surprised that the best way to plane wood is by carefully shaving roughly 0.050″ layers of wood off the surface. My first impulse would have been to sand the wood, but apparently that leads to inconsistent results.

After planing the wood, I used miter and track saws to cut the slats to the right dimensions. Originally, I planned on using butt joints to join the slats with wood glue. While its possible to use a butt joint, the makerspace curator recommended that I add some overlap between the slats with the router for a sturdier build. I cut slots into the top and bottom slats and added a 1/8″ radius to the outer edges to give the device a more finished look. I then stained the wood using a dark oak stain to give the wood a more aged appearance (and to cover up some minor errors).

Once I glued together and stained the case, I realized that I had made a measurement error on the depth of the router cut. I was left with a 1/4″ gap a the top of the indicator. I decided to fix this problem by adding a feature – a 3D printed mount for the indicator and a backlight.

The mount was designed to hold the indicator tightly and extend it past the face of the wood for a more pronounced effect. I utilized the extra 1/4″ of space by mounting two LEDs underneath the indicator to provide some uplighting. To prevent the light from shining through the plastic and direct the light upward I lined the inside of the mount with aluminum foil. Fortunately, the addition of a backlight improved the project. My measurement error with the router could have been a serious problem.

The next step in the project was to disassemble the analog displays and scan in the faceplates.

After taking the voltmeter apart, I became interested in how it measures the voltage between it’s anode and cathode. It turns out the voltmeter I selected for the project is whats called a d’Arsonval moving-coil galvanometer (source: IHS Engineering 360). It uses a permanent magnet and a fine coil of wire where current flows. As current flows, it creates a magnetic field which causes the needle to deflect.

Next, I scanned the faceplates and edited the images in photoshop. I changed the scale to an indoor temperature range of 40 to 100 F. I printed out the new images on card-stock and installed them in the indicator. The indicators have a small screw that adjusts the spring tension and sets the needle position. This allowed me to tune the displays from a known temperature in my house.

Finally, once the housing was built I installed all of the wiring and electronics. It was more difficult than expected trying to get everything connected and working in the case. It was particularly hard to get the soldering right on my back patio during the snowstorm!

As a final step, I cut apart an old samsung phone charger to serve as a power source for my project. Most phones require a regulated 5v power source to charge. The Arduino ProMini that I used for this project also requires a 5V power source – so I removed the usb connection form the end of the cable and soldered the connections to Arduino.

Using a multimeter I measured the current used by the completed project to be about 120 mA. At 5V, the device uses 0.6 W during operation. Assuming the current price of electricity is $0.08 per kilowatt hour in Colorado,tThe weather station could be turned on continuously for a year for under $0.50.

I got the idea for this project by looking through my electronic parts drawer. I’ll often times buy electronics parts I find on spark fun or eBay with the hope of incorporating them into a future project . I purchased the analog displays on Ebay for about $2 each after watching a YouTube video on how an analog voltmeter could be used as a display with a PWM signal.

Analog displays can be used to give a project a pre-digital aesthetic, and surprisingly they are about 2/3 the cost of a 16×2 character LED display.

I wanted this project to be reminiscent of antique scientific and engineering equipment. I’ve always liked the antique barometers/thermometers that you sometimes see as home decoration. The combination of wood and scientific instrumentation evokes the age of exploration and early scientific inquiry. The barometer/thermometer pictured below is a good example of the style. It was restored by Rayment Antiques and auctioned in the UK.

I was also inspired by the ornate analog displays that were popular in the 1960s and 70s. In high school I learned about the 3 mile island disaster and was surprised by the complexity and analog appearance of the control room. This image shows the reactor control room (remarkably in 1998).

In this project, I achieved my functional goal of building a working home weather station. Although it only displays temperature and humidity, I could easily add other sensors or incorporate a wifi chip that fetches the current outdoor weather. I was pleased by how the exterior came out. The dark wood stain really improved the overall look of the project. The wood I used was pine, but I was able to achieve the appearance of hardwood like in the antique barometer above. In terms of my artistic goals, I felt that the project conveys the aesthetic I was looking for but the overall results were limited by my woodworking skills and the limited time we had to work on the project. In the future I would like to refine the weather station by adding more analog readouts and perhaps building a case that has a more ornate and victorian feel to it. However, despite it’s limitations I’m happy to have an upcycled weather station on my desk.