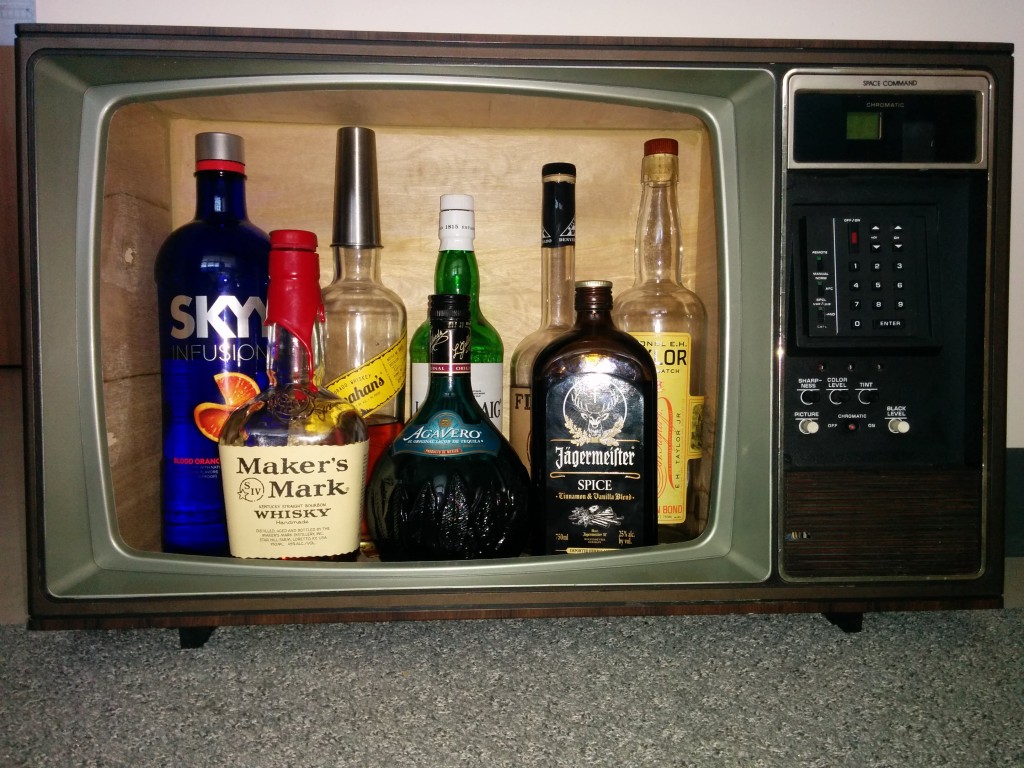 For my up cycle project, I wanted to create something not only visually appealing, but also useful. I have had my eye on an old television set, faux wood and all, collecting dust in my girlfriend’s parent’s basement for a little while. With a little searching through the internet, I was inspired to make the television set into a retro liquor cabinet. Initially, I thought it would be cool to turn it into a fish tank, but quickly realized that the shell was not built in a way that would be conducive to such a modification. Another motivator for turning it into a liquor cabinet was to try and replicate a dark wood, Victorianesque saloon aesthetic. The TV itself has been collecting dust for at least 15 years, not counting the 30ish years that it was in use.

I came across a project on imgur that successfully converted an old CRT television set into a liquor bar, which I used to help guide the initial stages of my project. Initially, I was hoping to upcycle old cabinet doors for the interior, but quickly realized that it would be near impossible to find cabinet doors large enough. I intended to keep the control panel untouched from the start.

My initial plan with this project was to simply gut out the electronics in the TV, and use the entire shell of the television set as the liquor cabinet. After getting another look at the TV, I realized that the entire console was incredibly deep and would take up more room than I would have liked it to. I decided to instead cut off the back of the console, and create a custom wood backing to the unit so that it would be a more desirable size. After doing a little bit of research and reading an instructible or two, I had a fairly good idea of what I had to do to accomplish the project. Old CRT TVs are notorious for keeping their dangerously high voltage charge for months, if not years after it was last unplugged. In order to not get shocked, I placed a screwdriver into the ground (earth ground) and connected it to another screwdriver using jumper cables and used those to discharge the tube. After that, I gutted the TV, leaving all of the wires connecting to the buttons and displays on the control panel in case I choose to add controls at a later date. After gutting the electronics, I took a hand saw to the back of the console which cut the depth to a more manageable length. I decided to use ¼” plywood cut to fit into the opening of the screen. Had this initial idea worked out, I would have been done in half the time that it actually took to make the cabinet.Unfortunately, the entire shell was made of injection molded plastic with various supports, steps, and random pieces getting in the way of a drop in shelf. In order to fix that issue, I took the old fashioned brute force approach and tore off the supports on the inside with a Sawzall, jigsaw, pliers, and various wire cutters. It was far from an eloquent solution, but it was a part of the project that would not be visible in the finished product.

After successfully getting rid of the injection molded supports, I measured out rough dimensions for the wood of each face of the interior of the cabinet and cut them to size with a circular saw. I had planned on simply using L brackets to keep the shape of the interior, but with the plywood having a depth of only ¼”, it made it hard to put any kind of screw in while keeping the visible interior face free of any blemishes. I still took this approach with plenty of washers and short screws, but there was not enough room in the interior for two sets of brackets on each corner. Only having one bracket made the cabinet incredibly loose, so with another trip to home depot and advice from the employees in lumber, I decided to use Liquid Nails to reinforce the joints which could double as caulk to help get a nice finish.

The final challenge was figuring out how to apply a backing to the console and have the interior rectangle lay flush with it’s backing. Upon discussing with a friend, I decided to use liquid nails to glue little pieces of wood in each corner with a hold that a nut and bolt would fit through. That way, the back stays removable for trying to wire up lights or the control panel if I so choose.

Over all, I was happy with the outcome of the project. Functionally, I accomplished everything I had hoped, with a removable back, a less deep overall unit, and no visible blemishes on visible faces that are visible from the from of the unit. Artistically, I achieved my goal of keeping the entire console reminiscent of the television’s original design and retro aesthetic while making it a functional piece of art. The next step for the television is to hopefully add led light strands to the underside of the cabinet to illuminate the contents and set up the television’s control panel to control the different settings of the lights. Additionally, I would love to stain the wood to match the faux wood on the outside of the console.