For my project, I’ll be designing a MIDI drum pad.  MIDI (Musical Instrument Digital Interface) is just a standard of connectors, digital interfaces, and protocols that allow musical instruments to communicate with one another and computers.  My midi drum pad will be able to sense when a drum head is being hit, and transmit that signal, via MIDI to either another instrument or a computer.  This is awesome, because it allows me to use the drum kit to play pretty much any sound with the drum kit that I can create/control on my computer.

I was inspired by a few of the analog drum synthesizers/controllers that are already on the market.  I think the two most aesthetically pleasing electronic drums on the market are the Nord Pad (really just a control
ler for the Nord Drum 2 synthesizer) and the Yamaha DTX-Multi 12.

Both of these models have a minimalist design (most of the real estate is dedicated to the drum pads) that I’m really attracted to.  By squaring up the drum pads, and mounting them to a single, flat chassis, the drums becoming a lot more convenient to utilize in different performance environments.  They can be set up on a table next to a computer, on a chair, on a stage stand, etc.

A lot of modern electronic drum sets take up a lot of real-estate, and look like they’re trying to be something they not.  For my design, I’ll be going with something more along the lines of the Nord Pad.

To construct the chassis, I plan on using 1/4″ maple.  Maple is known for being durable, so it should be able to withstand a few stray hits.  Besides this, maple is a popular choice for laser-cutting, so I should be able to design the drum kit body in SolidWorks, and laser-cut out all of the panels.  this will provide a clean assembly, that can be stained or painted.

For the drum pads, I’m going to use modified Rock Band drum heads.  Using a stencil and razor, I’ll cut the drum head down to the size and shape that I want (probably 6″x6″ squares).  These drum pads are super durable, so they should hold up to any jam-sesh. 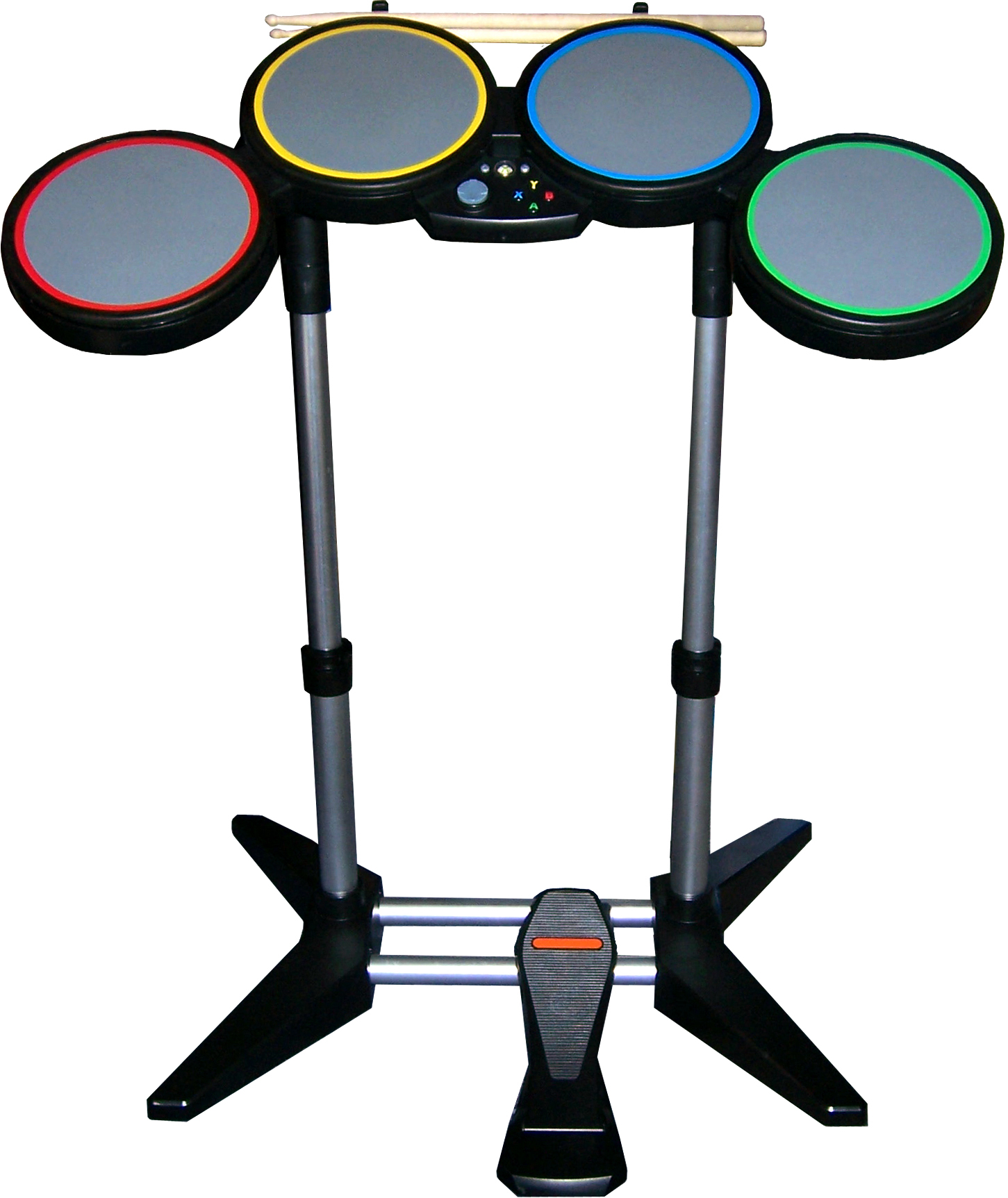 The rock band drum set will also provide all of the sensors required.  Each drum head has a pretty decent piezoelectric transducer in it.  This sensor just sends out a voltage when deformed – in this case, when the drum head is struck.

Each of these sensors will be rewired to a single MIDI head so that when each sensor is hit, it will send out MIDI data.  There may be a way to wire up the sensors so that no micro-controller is needed, however, if I do ned up needing to use a micro-controller to streamline things, I plan on going with the SparkFun Teensy 3.2.

The teensy 3.2 actually has a MIDI Out setting, so that it can send Midi to a computer via a micro-USB to USB connection.  I should be able to use the Rock Band drum set’s existing power supply to power my full assembly, however, if I end up using the Teensy, I might even be able to power the assembly straight from USB, which would be really sweet.

Finally, I want to add some flavor to the assembly,  I’m pretty into LEDs right now, so I want to find a cool way to incorporate LEDs into the body of my drum kit.  For now, the plan is to laser etch a some sort of sci-fi design (probably Space-Dandy themed) into a piece of acrylic mounted to the back, vertical wall of the assembly.  A row of LEDs above and below this piece of acrylic will dissipate light (need a clever way to dissipate the light still) and accent the artwork.

The project should end up costing under $100.  I already have a Rock Band drum set that I no longer use, and sheets of Maple are only around $25.  If I end up using a Teensy, they’re only $20.  Adding in cost of paint, wood glue, a USB cable, led’s and some acrylic, I should be able to stay well under $100.

Design will happen in three different subsystems: chassis, electronics, and LEDs.  The chassis will have to hold all of the electronics and pads, and can be developed alongside the other two subsystems.  The electronics will consist of re-wiring the sensors, and outputting appropriate MIDI data.  The LED subsystem will light the art-panel with nice clean glow.  The goal is to have independent sub-assemblies developed after spring break, leaving time in April to incorporate and refine them.  Hopefully I’ll be able to build something as robust and form-functional as the Yamaha DTX-Multi 12 that’s even more aesthetically pleasing.