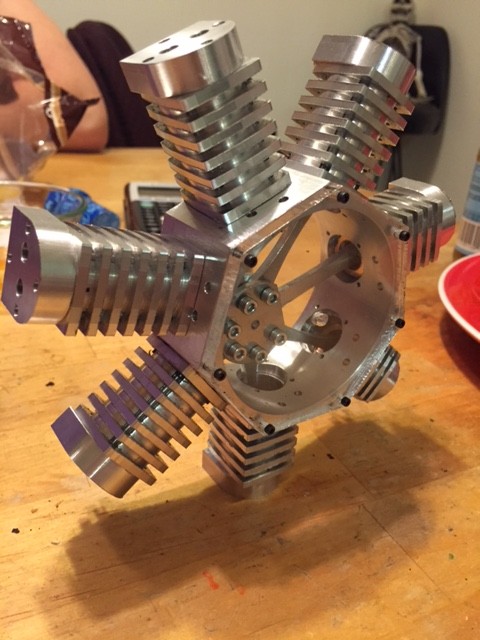 I’ve been making fairly steady progress on the desktop radial engine. I currently have 57 machined pieces completed, with 47 left, yet most of these are not unique and thus the machining process is a little faster. All of the complex parts are done. I was also able to get a large chunk of the assembly done with all of the pistons installed. The mechanism has been functioning as expected and I just have to keep working. One of my biggest worries as of lately was if the very tight tolerancing (+/-0.0005in) on the pistons would still allow for a smooth sliding action. This tolerance is necessary in order to provide as much of an air tight fit as possible while still allowing a sliding action (the pistons are exactly 0.002in smaller in diameter than the bore of the cylinder). Due to time constraints, I had to omit the usual solution to this problem which is piston rings. At first, the action was rough, but the bearing bronze (the material the pistons are made of) has been doing its job and, after manually moving the assembly a lot, the action is now smooth.

There have been some frustrations with the apparently cursed distributor. This is the small seven sided piece with the valve sticking out of it below. This piece is absolutely critical, but inherently hard to manufacture. It took three attempts to make. The mounting plate it rests on is currently in its 3rd attempt as well due to similar issues. I should be able to get that piece done by the end of the week.

Time wise, I have lost count of how many hours I have spent machining, but its quickly approaching 100 hours. Cameron, in the ITLL machine shop, who has been incredibly helpful, calculated that the industry value of the current machining progress is $2000-$3000. I should be able to finish the machining by the end of next week, given that I will have class time available to me. Then I will enter into the testing phase of the project. If all things go to plan I will have a running engine by the end of the weekend.

As for my inspirations, I have realized I have been subconsciously inspired through many of the movements we have studied in class. I have listed them below.

Bauhaus: The edgy, yet bold lines are apparent throughout my engine. Functionality is combined with stylistic “pings”

International Style: The pure functionality of my engine, using only mechanical components is very similar to the international style

I find it interesting that my engine follows aesthetics that are typically associated with architecture. I look forward to learning if there are other movements that may have influenced me through further studies.