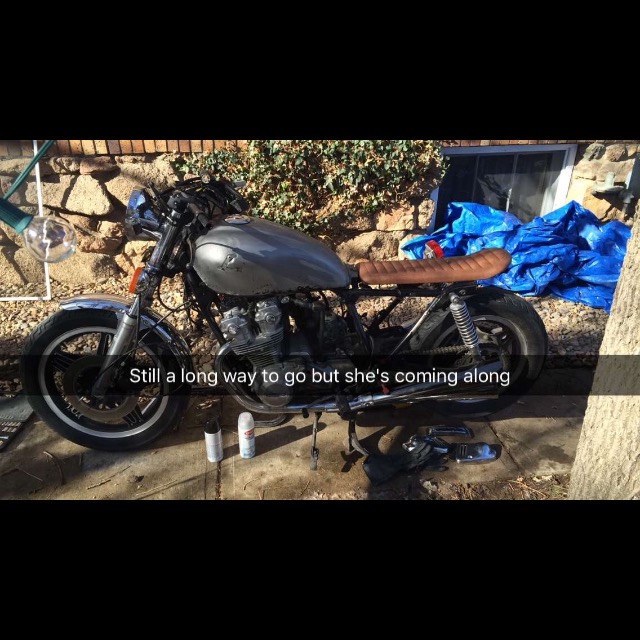 I would classify my cafe racer/brat bike in the post-moderism era around the late 1970’s to early 1980’s. This is pretty simple since I am re-designing my stock bike the way custom sport bikes used to look in that era.

During our aesthetics game we were to design a hairdyer in the post moderism era. It turned out to be pretty straight forward.

Lots of round edges, easy to assemble, and quickly made and assembled. We also planned to design it with the dull yellow, green, or blue you see in that era. The pic above sums up a few of our designs.

Here’s a quick pick of my bike so far. Since the last update, my seat I ordered has arrived and I also stripped the paint on the tank down to the metal. Unfortunately the seat does not fit securely on the original frame (surprise) so I am going to have to do some welding to modify the frame or disassemble the seat to fit he original seat shape. I plan on getting tan grips to match the tan seat and have been leaning towards blacking out the gas tank since I got a hold of some sweet silver Honda wing logos. I need to reattached the wiring in order to get the bike running again so I can then drive it to the weld shop to get the seat mount welded (after I design one) and put together the final pieces to the bike. My end result for this class will not be the end result of the bike though. I plan to continue to upgrade parts of the bike until it turns out similar to this.

It will take me all of summer most likely to finish but I think for this class, the bike will still turn heads and be a completely new machine in the eyes of the viewers.