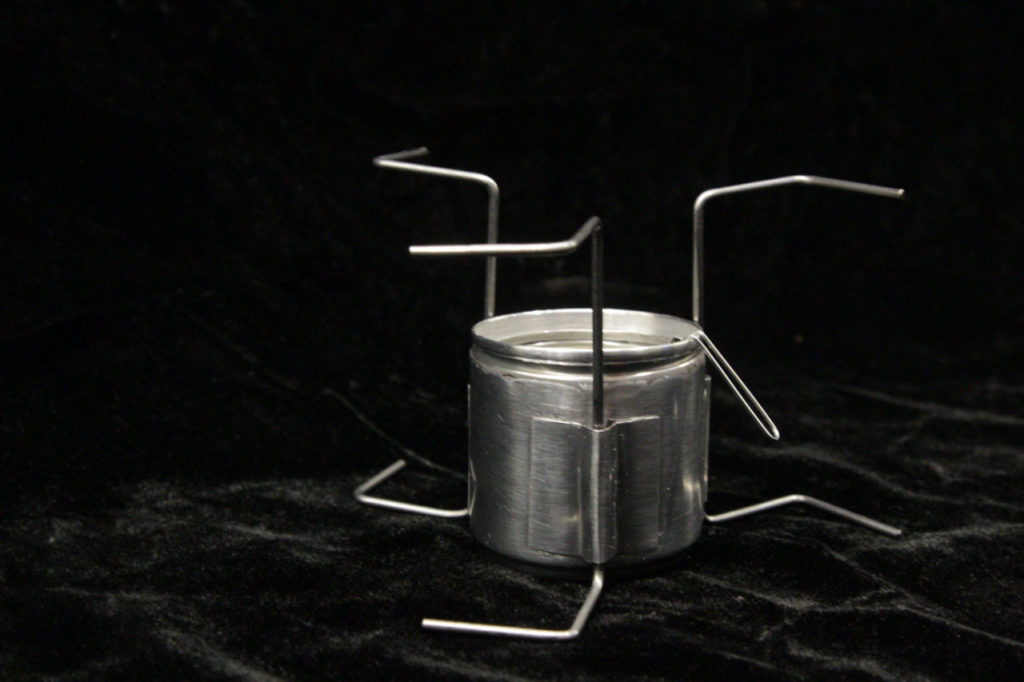 I created an alcohol backpacking stove following a minimalist aesthetic. The stove uses denatured alcohol for fuel, features legs which function as a built in pot holder, and has a “simmer ring” to control temperature.

The general concept of how this style of stove works is illustrated well by these two images. The dark blue symbolizes the liquid denatured alcohol which is poured into the center chamber of the stove. Once the stove is lit (lightest blue symbolizing flame), the heat begins vaporizing the alcohol which pressurizes inside an interior chamber, shown as the lighter blue. The pressurized alcohol vapor exits the stove at the top through jet holes and is ignited by the central flame.

After doing some sketches to narrow down my goals, I started making prototype stoves to find a style I thought would fit the minimalist aesthetic well. The first prototype I made was very crude but proved to be an excellent learning experience as it showed me how much precision would be needed to reach my goals. I also made a few prototype leg designs out of wire I had laying around.

The second prototype stove I made was closer to what I was aiming for, but still rough and not exactly what I wanted stylistically.

The final design I chose to base my final product on uses an outer reservoir and an interior piece with ridges (called capillaries) to create small interior chambers for the alcohol vapor to form in.

In the final design I bent steel rod to make legs which I attached to the side of the stove with brackets. The brackets were made from pieces of aluminum cut from the sides of cans and then pressed into shape. Inside each bracket is a piece of aluminum tubing which is what holds the leg and allows for free rotation. The brackets are secured to the outside of the stove using JB Weld. Additionally, I made a “simmer ring” from the very top of a Redbull can which works as a means of temperature control. The ring rests on top of the stove to block off the jet holes so there is a smaller flame, allowing for cooking at a lower temperature.

In order to cut cans at exact heights over and over I made incremental blocks which allowed me to secure a razor blade for precision cutting.

I found that using steel wool was the best way to remove the coating on cans and polish them. Polishing the cans was actually a challenging aspect of this project due to the fact that many cans are anodized so solvents do nothing to remove the coating. Sandpaper also worked well, but it was a lot more work compared to steel wool.

The tools I used the most are shown below. I used pliers to bend the steel rod to make the legs, a hand drill and tiny drill bits to make the jet holes and a circle cutter to cut the top and bottom out of cans.

I carved a notch into a piece of wood to make a die for the leg brackets. To make the brackets I put a square of aluminum over the notch, held a piece of rod over the top and hammered it to form the bracket to the correct shape.

(Originally my estimated cost was $48, so I did go over my budget but not by a huge amount. )