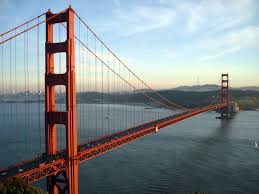 The Golden Gate Bridge is a famous aesthetic that sits in the San Francisco Bay, connecting the city of San Francisco to Marin County. This aesthetic is actually characterized as one of the Wonders of the Modern World.

The main reason the bridge was built was to connect two important pieces of land, because at the time the fastest way to get from Marin to San Francisco was by ferry.

The bridge was designed by Joseph Strauss, who fought for over a decade to have the bridge built. Strauss also had to have a professional architect help him co-lead the design, because he was only good at engineering. The architect who helped him was Leon Moisseiff, who also designed the Brooklyn Bridge.

The aesthetics of the bridge were influenced by safety and natural appeal. The bridge received its orange color to make it stand out with the fog that often inhibits San Francisco. The orange color was also meant to enhance the beauty of the bridge’s surroundings. At one point, this bridge was the longest of its kind, but it has since influenced many other bridges to be built around the world. It has also influenced and been in the center of many films and books.