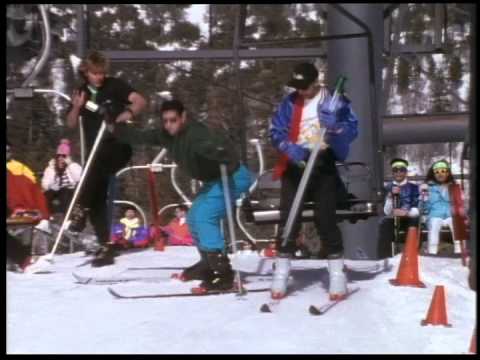 Photographing something that is extremely bright is hard. Adding in a moving object makes it even more challenging. Ski photography has come a long way since its start, around the time of the camera. It can be inferred that ski photography didn’t really come about until the camera had become more portable. It was around 1931 when some of the first ski movies came out, notably, The White Ecstasy [2],[3]. This movie, by Dr. Arnold Fanck, focuses more on ski jumping, than extreme adrenaline filled skiing [2].

In these times, it was more about showing the fun and learning process involved in skiing. Films and pictures were based off events that drew a crowd, like ski jumping and racing. There really wasn’t much appeal in large mountains and steep lines. These lines were considered pretty far-fetched, and the technology wasn’t there to keep people safe.

Stretching for a big race. [5]

It wasn’t until the time of Warren Miller, 1949, that filming skiing became more popular [1]. Miller made it more into a comedy, showing how much fun it was to be out on the hill. He put people falling off chair lifts, along side with people skiing with a mono-board. All the way to including what the latest and greatest athletes were skiing, those big lines in the middle of nowhere.

As technology continued to improve, access to more terrain also opened up. Helicopters become cheaper and people started to explore further and further. This changed the image of skiing, from fun on the hill to more of a adrenaline filled sport

However, it didn’t stop there, filming and photography also started to focus more on the scenery than just the skier. They focused more on the big mountain someone was about to ski, or not in some cases. It became more of trying to evoke some emotion, like you were flying also, or trying to make you remember a similar moment.

It has pushed people to always strive for that one day they saw in the movies, where no one could see while skiing.

Who doesn’t want to enter the white room! [9]