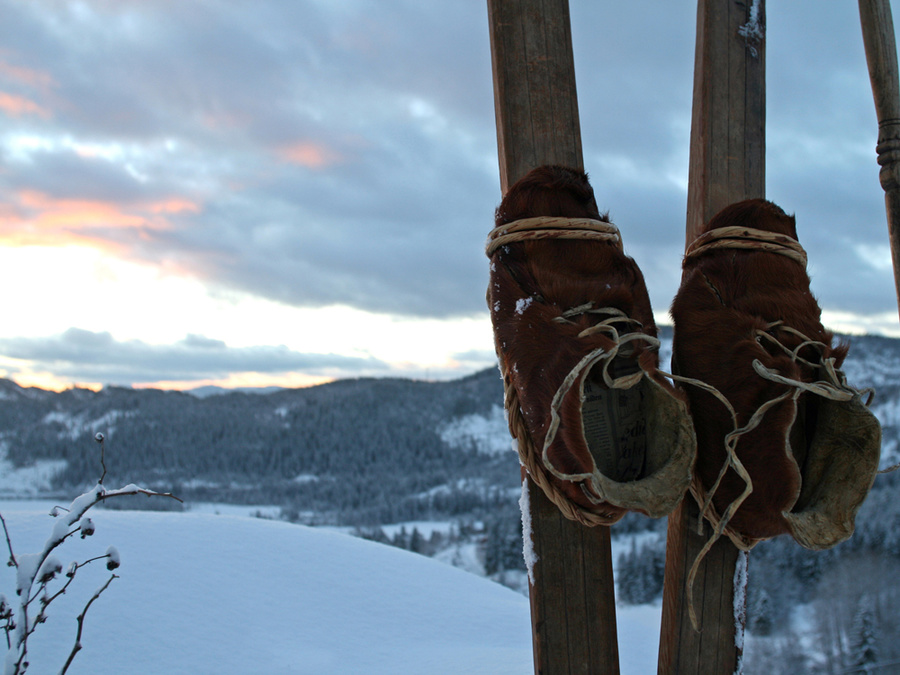 Skis have been used to traverse the globe for thousands of years. Born out of necessity, skis helped farmers, trappers, and warriors travel long distances more effectively. The skis utilized then were thick and made of wood. A common problem in ski design occurs from the weight of the skier concentrating in the middle of the ski, causing it to bow. To counteract this, the skis were much thicker, and thereby heavier, than what we are accustomed to today. This simple design was depicted over 5000 years ago on rock paintings and found popularity among farmers, hunters, and warriors. It wasn’t until the 1850’s that this design was iterated upon.

During this time, woodcarvers in Norway had begun to adopt a new design. Known as the cambered ski, it distributed a skiers’ weight more evenly across the ski by arching up towards the center. This design required much less material, creating a thinner and lighter ski. Its flexibility allowed it to absorb impact more easily and also permitted one to use the edge of the ski to carve when turning. The carving technique was much more agile than the previous sideways skid, and woodcarvers began to experiment with sidecuts.

The next major step in ski design occurred in 1868 when the Telemark ski was released by Sondre Norheim. The sidecut of the ski encouraged the ski to flex more easily when on edge. The result was a ski that held the shape of a turn as opposed to skidding. This cambered and sidecut design would go untouched for roughly 100 years.

The ski industry continued to innovate upon ski design over the next 80 years; however its focus was on the materials composing the ski. Ski makers began to experiment with harder and tougher wood as modern carbon-steel tools were developed. Laminated skis combined stiff and flexible wood together, reducing price while still achieving the stiffness desired. Metals began to be utilized in the ski, starting with the segmented steel edge. Created by mountaineer Rudolph Lettner, the metal edge gave a better grip on hard snow, but had to be routinely tightened into the ski.

Several solid aluminum skis were also produced. As bonding materials progressed, so did the experimentation. Aluminum skis with various wooden cores were created. These skis could withstand greater forces without sacrificing weight, but the aluminum bases could not hold wax as well. Polyethylene bases eliminated the need for wax, and could be easily filled simply by melting more polyethylene into it. Fiber glass reinforcement began to emerge in the 1960’s, presenting a livelier ski. Fiberglass reinforced plastic skis would quickly become the most popular design for most recreational skis, replacing both wooden and aluminum designs.

With the popularization of skiing over this time, ski makers had a wider range of needs to meet for skiers.  The traditional cambered sidecut design began to vary widely depending on the needs of the skier and the conditions being ridden in. Today, one can find a wide variety of skis to choose from. These skis tailor to different skill levels, conditions, and turning styles. Rubert Huber’s 1988 design emphasized a large size to accommodate use when in powder. The inspiration for the design came from the new snowboard scene; the skis were simply a snowboard band sawed in half with bindings added.

Some skis depart from traditional camber designs, and instead use rocker tips to promote floatability on soft snow. The increased popularity in terrain park skiing has led to increased demand for even shorter, lighter, and more flexible skis. Some of these designs also deemphasize the sidecut directly underneath the ski boot for greater control on rails. Conversely, racing skis embrace the sidecut, and downhill skis require a greater length and stiffness for maintaining control at greater speeds. Although the progression of skis took some time, it has grown from an aesthetic of one design into many.