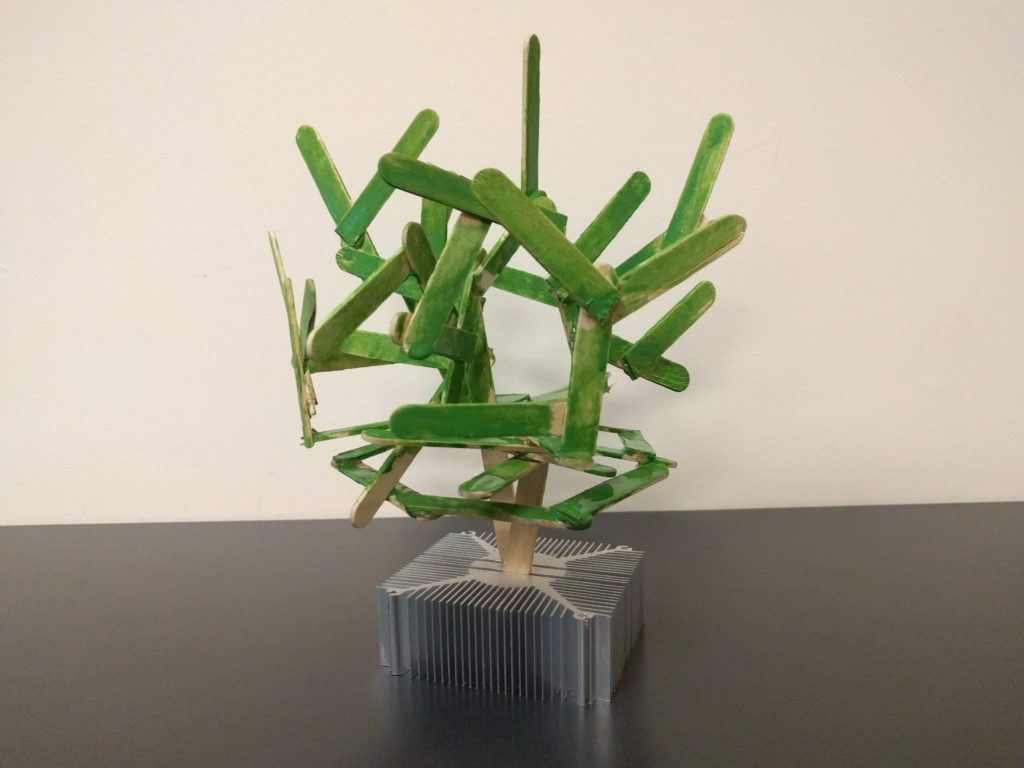 Inspiration: letting the artist in and giving the engineer a timeout

After a frustrating brainstorming session over the weekend, I ended up making almost no progress. Hence, I decided to go ahead and build something out of discarded foam boards which I found in my RA resource room in my residence hall. I thought it would be sweet if I could build a whole arsenal of Batman gadgets out of  foam boards, starting with some sweet Batarangs that could go in my dorm room. While raiding the junk in the room, I stumbled upon a discarded heat sink that had some interesting patterns formed by the cooling fins that I really wanted to use for my project. ( I also liked how the most optimal engineering design, had some artistic appeal as well!) That’s when I my project took a hard turn. My inspiration for the mechanical-Bonsai comes from the art of Bonsai and art made from junk. I wanted something that was personal and customizable. I eventually ended up making a bonsai-type artifact with a metal base that I found in the junk.

Goals: Getting out of my comfort zone

The engineer in me was constantly looking to include some kind of functionality in the project, perhaps including a groove for a pen holder or a small pocket for storage. I finally decided to scrap it entirely and do art for art’s sake. My final goal was to simply have a small artifact that i would keep in my desk and enjoy looking at it when it catches my eye. The mechanical bonsai plant has a green-silver which is soft on the eyes, the subtle patterns in the metal base had artistic appeal to me and I decided to not tamper with it. I decided that the fusion of metal and wood would have a a nice aesthetic. The beige, and green color of the wood-sticks would go well with the raw metal finish of the base. and would provide a contrast of materials.

My project started out without any set goal or a direction. After taking tedious classes which requires planning just shy of a German train schedule. It was much more tempting for me to remove the cobwebs out of the creative thinking section of the brain and let those neurons loose. Luckily for me, being a Resident Advisor has it’s perks. I have access to a resource room, with tons of crafting material; however, I was more interested in the junk. I initially started with an idea of making an array of Bat-gadgets (although I must say, the shark-repellent Bat-Spray would have been a challenge!) I started out cutting out a template out of discarded foam-boards to make some Batarangs. Admittedly they looked cool, but it didn’t wow the person I showed it to or even raise an eyebrow for that matter.

So back to the drawing board I went, which in this case was the discarded electronics trash-pile where I found a rather interesting artifact. I found a heat sink which had groovy patterns (sad, but pun intended). I started Ideating again as to what could be made with it. I decided to make ‘trees’ out of some wood sticks. Lo and behold, I had mecha-bonsai. The following class was perhaps the most important to me, as I got the opportunity to talk about the idea to my teammates Gautham and Ryan, who gave me excellent and insightful feedback. After showing my initial design; I walked away with two very important suggestions.

With this, I took the took the wood-sticks apart and began gluing the sticks in different directions and inculcated randomness into it, giving it a deliberately ‘shabby’ look. Next I proceeded to make it denser by gluing more sticks into it. Finally I decided to paint the sticks green and retain the metal finish on the base to show contrast. Although I did preserve my flat-profile sticks, which happened to be a happy accident as a result of the glue being stronger than expected. Now, according to my whim, I can switch out the ‘tree’ part of the design by simply taking the top and replacing it with the older profile. Which in my opinion is a nice little feature.Additionally, I made a conscious choice to leave the base untouched because I felt it had artistic appeal as it was and felt that anything I would do would simply make it complicated.

I was quite comfortable with the design process that I followed in my project, incorporating critique in the loop was both a fruitful and a humbling experience. if I had not found the base, I would have stuck to the Batman gadgets. The heat sink happened to be a happy accident! I took the opportunity to explore and experiment with different objects and found that it better helps my thought process, if I physically have them with me. This might not be the case with most people, but I was comfortable with having an element of volatility in my creative process. I feel it exposes me to more ideas and preventing creative block at the same time. Of course, this process is not ideal, and will not work for most situations, but the creative freedom given in the class allowed me to experiment with ideas as it came to me. If I have the opportunity to use the loop I would do it again!

I am quite happy with my design, although in hindsight, I could have also had a version with the sticks in a more organized pattern, closely resembling an actual bonsai plant. Perhaps when I find the time I can work on that and update this blog post with more pictures. I could also experiment with color and texture. The idea using something else altogether instead of wooden sticks comes to mind. I found that the activity of creating the Bonsai ‘tree’ with sticks was a meditative and enjoyable and I see myself creating more variations for the sheer joy of it.

The presentation, was a humbling experience. I received some wonderful feedback and gained confidence in my abilities, some students had great ideas, such as making seasonal and festive variations of the trees. It really opens new avenues previously that I did not think of, and that’s what I really enjoy about collaborative design.