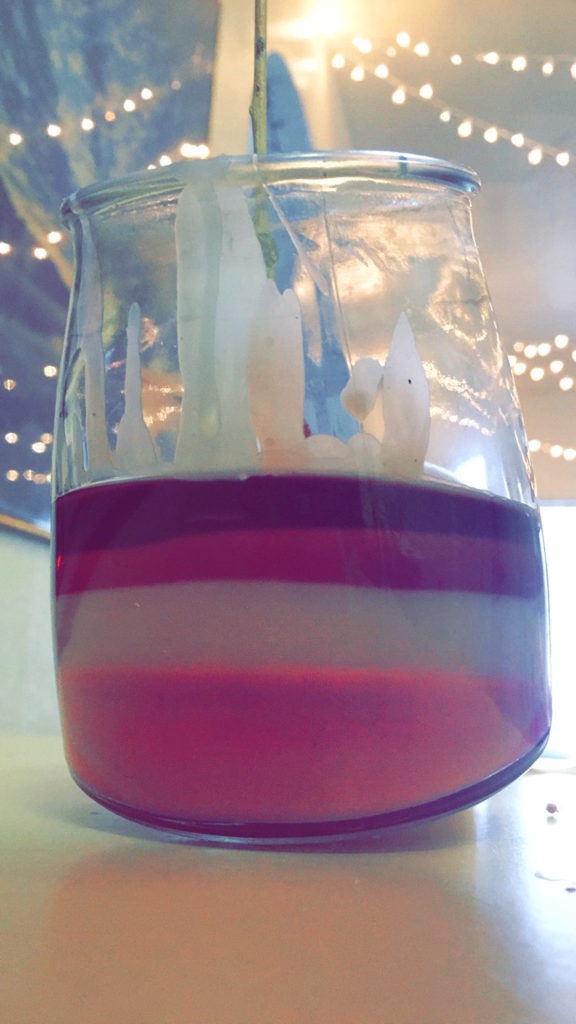 My overall vision for the project was to take remnants of candle wax, shown in Figure 1 below, and make a single aesthetically intricate candle with triangular designs in it. This vision was based off a picture found on Google and is shown in Figure 2. A part of this vision was to make this candle functional, which could be done by adding a string into the middle of the dried wax. I had seen my roommates use the string technique before as the wick and it seemed to burn just as effectively as store-bought wick.

Before beginning this process, I created a design loop that I thought would incorporate all aspects of what I thought would be involved in this project. My preliminary design loop can be seen in Figure 3 below. As you can see, I began this process by first thinking about what design I wanted the candle wax to turn into. This research had been prompted by the realization that if I put a mixture of molten red, pink and white wax all together, I would just get a simple candle I could just buy at a store. Instead, I wanted to try to see if I could create an aesthetic using these various colors.

Next, I needed to determine what materials would be needed for this project. Obviously I would need to gather as many candles as I could find, which ended up being 5. I also acquired a vase or glass large enough to hold the wax, string for the wick and my roommates hot plate. The last two bubbles in my ideal design loop were what would happen if the wax was or wasn’t cooperating.

One of the first things I realized in the real process that it was going to be much faster to melt the wax in a toaster oven rather than hot plate. A picture of the melting of my first candle in the toaster oven can be seen in Figure 4.

For the real process, however, I realized quite quickly that I failed to account for any mishaps that could happen along the way. One example of this was when the container of hot, melted wax spilled all over my toaster oven. Since you can’t poor wax down the drain because it drys and causes problems, you have to either heat it up again and poor outside, or scrape the dried wax off the toaster oven pans. In my case, I had to spend the time reheating the toaster oven then dealing with hot metals. A picture of this fiasco can be seen in Figure 5 below. Not only was that a bummer in itself, but I also lost a lot of wax in the process.

Another road block I came upon was the candle wick. I didn’t realize that I would have to personally hold the string throughout the whole process in order to keep it in the middle. My solution to this was getting a stick that was more stable than string and wrapping string around this. A picture of this set-up can be seen in Figure 6.

Overall, I would say that my design process stayed pretty linear, similar to my ideal chart in Figure 3. Looking back, I just would have added another bubble for mishaps and problem solving.

As mentioned above, my aesthetic goals were to make triangular shapes out of the various colors of wax. In addition, I wanted to choose wax colors that were complimentary. Since it is Valentines season, I thought that a mixture of whites, red and pinks could do the trick! Figure 7 below shows my layering process after adding the third color to the new jar of wax. Figure 8 shows a side view after all waxes were layered.

Later I noticed that not only was there aesthetics in the design itself, shown in Figures 7 and 8 below, but in its smell. The melted waxes included smells of cinnamon and various flowers which ended up creating a warm and cozy smell when the candle was lit. I feel certain that these changes will change fragrances when you melt down to the lower levels and I’m excited to see what cumulation of smells will stem from this candle.

Figure 8: Side View of Final Product (Picture by Emily Pearson)

A candles primary function is to hold a flame when lit which was a goal I was also trying to achieve. At first, I just used a wooden stick found outside my home as the wick. When I had trouble trying to light this, I decided I would try wrapping string around the stick because I knew from my roommates previous experiences that string worked just as well as a wick. The reason I had to wrap the string was because the stick allowed the wick to stay in the center of the candle. If it were to have fallen to a side when lit, you could run the risk of breaking the glass which could become dangerous!

After adding the wrapped string, I tried lighting it again and it worked! Not only that, but the string stayed lit so long that the stick caught on fire too, creating a two-pronged candle. Please refer to Figure 9 for reference!

After presenting to my pod this morning, I realized that if I were to do this again, I might try to find another vase or even create a mold that could make this more aesthetic. I also ran into time constraints waiting for this to dry and think in the future, I might try to set up a fan or other cooling mechanism to help increase the heat transfer.

As for this candle, I will be placing it next to my bed so I can smell it as I’m doing homework or reading before bed. I’m more than enthused about the results of this project and will most likely continue re-melting candles in the future.