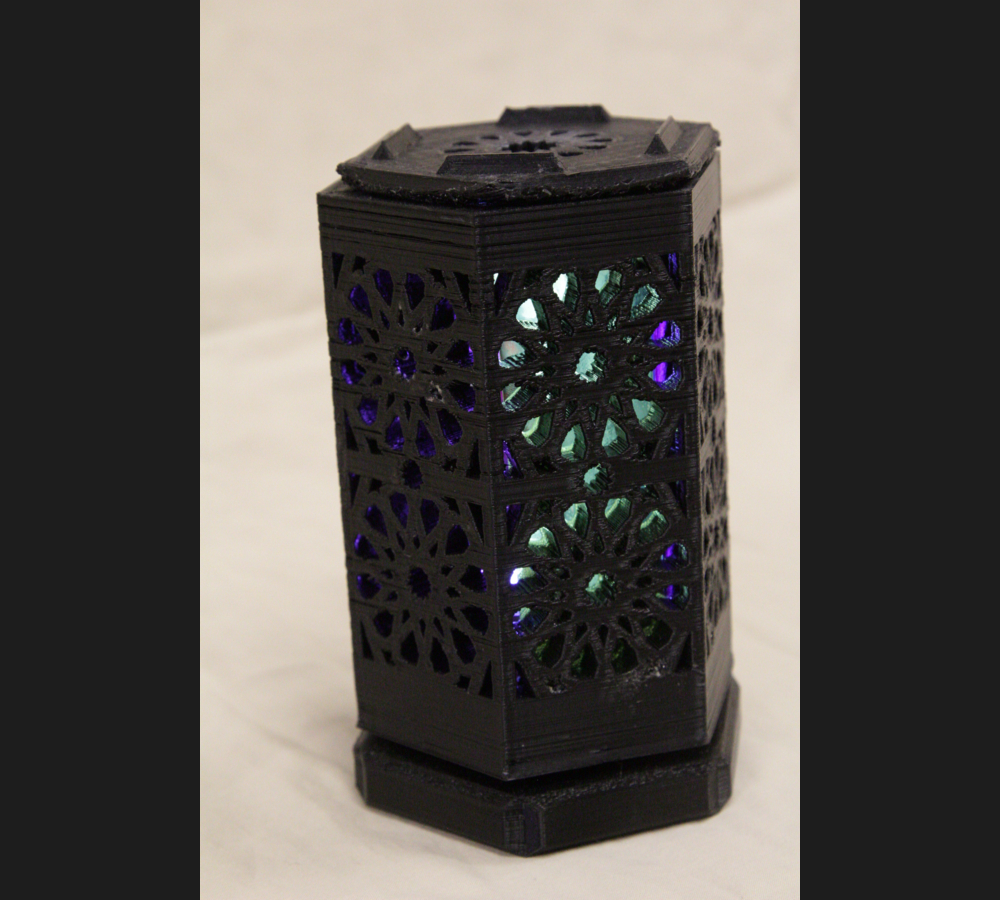 For this project I decided to make a rotating candle holder, inspired by a traditional incense burner called the Majmar. In my country, the Sultanate of Oman the Majmar has been used for thousands of years to burn incenses in a protective and stylish way, like a candle holder. It is made of clay and comes in different sizes and shapes. Here I get the inspiration to combine the Arabic unique design(Arabesque) and the Majmar to make a candle holder with a special touch. The candle holder consists of three parts which are the base, the body and the lid.

Shown above is the candle holder where you can see the lid, body and base(top to bottom).

The aesthetic demonstrated in the project is the patterned design influenced by old traditional Arabic architecture, and sometimes shown in furniture and paintings. its called arabesque aesthetic and how I see it is that its a very detailed patterned or repeated design that takes simple shapes and repeats them to come up with complicated shapes. I have talked about my aesthetic in previous posts in more detail, click here to read more

The design started off simply by sketching the base and the body, at first I had them with a square cross section but to emphasize the aesthetic more I moved to a hexagonal shape.

The following is the final sketch I ended up with after a series of iteration. The designs on it were a draft just to show the idea behind it

Figure 2: Sketch of the candle holder

As I mentioned before, the candle holder consists of three main parts. I’ll start off by the body, here is where the aesthetic is designed and presented. The way I made the pattern is by designing a single shape and the making it a circular pattern. This includes the diamond shape(repeated 6 times), small flipped diamonds(12), four big triangles on the corners, four kite like shapes and a gear shape in the middle. These shapes are demonstrated below, repeated twice above each other on each face. All six faces have the same patterns. At the bottom, the Body has a 1/4″ hole to be fastened with the base.

To clarify, 0.5″ from the bottom of the body is a solid where the candle sits. The rest of it is 3.5″ tall with the design on.

The second part is the lid, here I got the inspiration of the design from the same aesthetic of the body, it is patterned stripes all around that expose thelighting from the inside. It has an extruded hexagonal shape that is open from the middle.

The next part is the Base, it is hexagonally shaped with frame like design on the six sides. In addition, the base has a hexagonal groove/cut on the bottom in order for me to be able to have a nut secured underneath. Also the base has a 1/4″ hole in the middle for the base to be fastened to the body.

Figure 5: Top view of the Base CAD

Figure 6: Bottom view of the Base CAD

Another part is the colored film sheets attached to the interior of the candle holder. Note that the figure 7 below of the expanded view shows colored film in red and blue since those are the colors in SolidWorks. Regardless, I will have 6 different colors which are red, blue, gree,, yellow, purple and pink, and the reason behind this is that I would like to expose the aesthetic colorfully. Lastly, Assembly view. The following figures show the whole product assembled and expanded.

Note that I did not produce any technical drawing as I 3d printed all the parts except the colored film. Using polylactic plastic(PLA) which is the material used by the printers to produce 3d printed objects, its a type of thermoplastic polyester.

The budget I was expecting to use was ~$100 maximum as I was planning to implement a motor mechanism in the base that rotates it, as I saw that wasn’t very necessary I did not spend that much. Spent $12 on the PLA, $11 on the colored film and $9 on the light candles since I had to buy a bunch of them, which totals to $32. I am fairly happy with the price since it didn’t cost a lot to produce the candle holder.

I would like to thank my instructor for her advice and for giving us this opportunity, the pod members I have on their critique and the ITLL staff for the help and support.