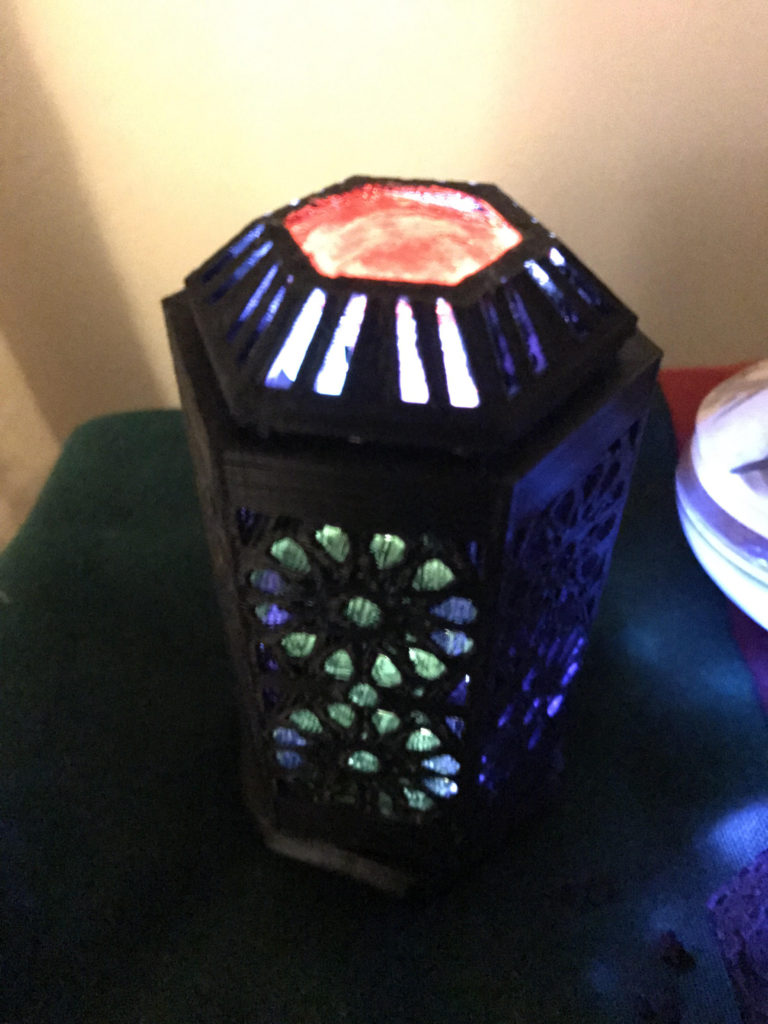 Reflection on the project

My intention at the beginning of this project was to come up with an object that displays the aesthetic that I had in mind(Arabesque). In addition, I also wanted to make it a gift since I got the chance to do any project as long as the only requirement was it being dynamic. So I was looking around and I decided to make something for a desk and I remembered the person I wanted this for liked candles. After brainstorming I decided to make a candle holder, and make it rotate. After a lot of brainstorming I decided on the cross section to be hexagonal, and decided on the size. One thing is that I was brainstorming as I was going and did a couple of trials before deciding. I ended up making something that was somewhat in my mind and it turned out to be really cool and aesthetic, it also was a decent size and won’t take much space. The exact size was 2.6″ wide and 4″ tall.

I think people in general really liked the project and the way it turned out to be. I have received a lot of sweet comments of its color, design and size. The lighting inside was just enough to expose the patterns on the size. A lot of people were wondering what it was at the beginning as you cant tell right away that its a candle holder. However, I have received  very constructive criticism from the class and other people which I am very glad for and it will help me in future projects and if I had a future iteration.

A picture of the booth:

I have learned a lot throughout this course, including some very useful skills like sketching brainstorming and knowledge about different arts and aesthetics. In this class we presented a number of times and with each time my confidence increases and I felt more comfortable with the people around me. I also like the way this class was taught and that there is a lot of interaction between students and also with the instructor. The fact that all of our work is posted in blog helps with getting better results since people can give you feedback.

For the technical part of the project I learned about 3D printing, how its done and some techniques on how to get the most out of what your printing. In addition, I learned the materials and the types of 3D printers where each one is dedicated to a certain job. I also somewhat learned when it is prefered to use a laser cutter instead of a 3D printer for a better finish or accuracy. In addition, this project was iterated anumber of times which taught me that prototyping, testing and fixing is the only way to go.

As I mentioned before that this project was made as a gift, so I am going to give it to that person. I think it looks nice and clean enough as it met my functional and artistic goals as well. I would definitely make something similar to this project, maybe an improved version with a better quality finish, a different color or maybe multiple colors. I also could implement other designs into a future iteration.