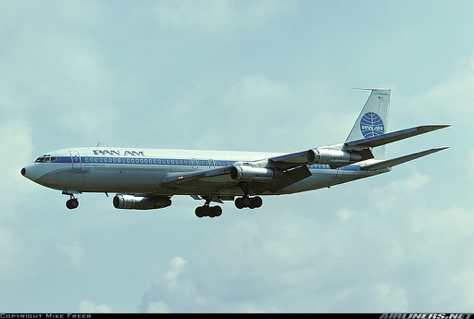 There are two major manufacturers of aircraft since the 1950’s whose designs I will cover; Boeing and Airbus. Boeing was founded in 1916 in Seattle and started out making wooden frame aircraft. Airbus was founded in 1970 and is a major aerospace manufacturer in Europe. This post will focus on the design on airplanes starting in the 1950’s up until today.

The 707, which had its first flight in 1957, was Boeings first jet airliner, and was the first jetliner to be commercially successful. This jet aircraft dominated air transport for decades following its release. It is credited with ushering in the Jet Age, and established Boeing as a major manufacturer of passenger aircraft. The 707 still has some visible influences on aircraft design today. Lessons that were learned from Boeings successful propeller aircraft experience were applied to this design. The wings were swept back at 35 degrees, and the engines were turbojet which has a distinct look much different from the turbo prop engines used nowadays.

The 747, which had its first flight in 1969, was the first wide body jet developed by Boeing. The distinctive hump on top of the aircraft was included to allow the jet to easily be converted into a cargo aircraft. If the jet didn’t catch on as a passenger plane, then they could easily be converted into cargo aircraft. The hump design would prove to be iconic, and defined Boeing in its generation. Its design is recognizable around the world by its nickname, the “Jumbo Jet”. The aircraft was the brain child of Joe Sutter, a young Boeing engineer who designed the first 747 and worked tirelessly to update its design through the next decades. This aircraft is still in production today, a testament to the incredible aesthetic beauty and capability of this aircraft frame.

The A300, which had its first flight in 1972, and has the distinction of the world’s first twin-engine widebody aircraft, and was the first aircraft released from Airbus. This design combined lessons learned from the smaller aerospace companies that came together to form Airbus, and is distinct compared to the Boeing designs of the time. This was also the first time composite materials were used on a commercial aircraft. This leaves the aircraft with a smooth finish that makes it aesthetically pleasing to look at. If you notice on the 707 and 747, most of the aircraft is made out of metal. This use of new materials pushed the ideas of aircraft design and would soon be incorporated into all aircraft designs

The 767, which had its first flight in 1981, was Boeings first attempt at a widebody twin-engine jetliner. The 767 was to replace the 707, and was designed with many of the design features and lessons learned from the 707. The nose of the aircraft is much less pointed than the 707, which gives the plane a smoother look. This aircraft moved Boeing into the twin-engine mid to long-range aircraft market, which is a major part of its business model nowadays

The A330, which first flew in 1992, was a derivative of the popular A300. Airbus took the lessons they learned from the A300, combined with new technology available at the time, to create a next-generation aircraft. This aircraft is much sleeker than its ancestors. From the engines to the added raked wing tips, this aircraft adds to the appealing visual elements of the A300 to create a fantastic aircraft

The 787, which first flew in 2009, is a testament to the power of engineering and just how far we have come in our aviation technology. Personally, this is my favorite plane to look at. The chevrons on the nacelles, which reduce noise, add a futuristic look to the aircraft that has not been seen on any previous models. As well, the vertically swept wings, which are mad entirely of composite materials, add to this futuristic look. The nose is in line with the communications cone, which is not typical of Boeing aircraft and makes the plane look sleek. This aircraft takes advantage of new technology to be 20% more efficient than the 767 that it is set to replace

Overall, the airplane designs from the 1950’s are still very present in aircraft today. Aircraft designers have taken the structural and visual lessons learned throughout the last 70 years to create incredible modern aircraft like the 787