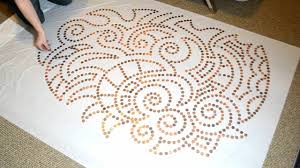 It took me a while to figure out what I wanted to do for this project and a couple ideas were bouncing around in my head. I was originally going to make some sort of plant based project that would grow within a glass bottle, as seen in the picture below.

However, after contemplating the interest level I had in that idea as well as other ideas I had come up with, I have narrowed my choices down to one idea that I want to do and it will involve US quarters, Styrofoam, and yes, pennies. Originally I wanted to try and create something somewhat functional but with this penny project idea, I am definitely going for more of an art installation than a functional device. I will be laying pennies on a Styrofoam piece and laying the pennies down in a certain way that I do not want to disclose yet as I want my final creation to show my thought. I will only be needing to use pennies, quarters and/or dimes and nickel, Styrofoam, hot glue and possibly some sharpies. But I want the colors of the currency to really stand out and make this piece. My concept sketch below shows somewhat what I am trying to produce. I am going to call the art piece the “Death of the Penny”.

Though the picture below shows the art of laying pennies down, I could not find a good picture that is similar to what I have in mind. This makes me excited however because it makes my idea feel unique.