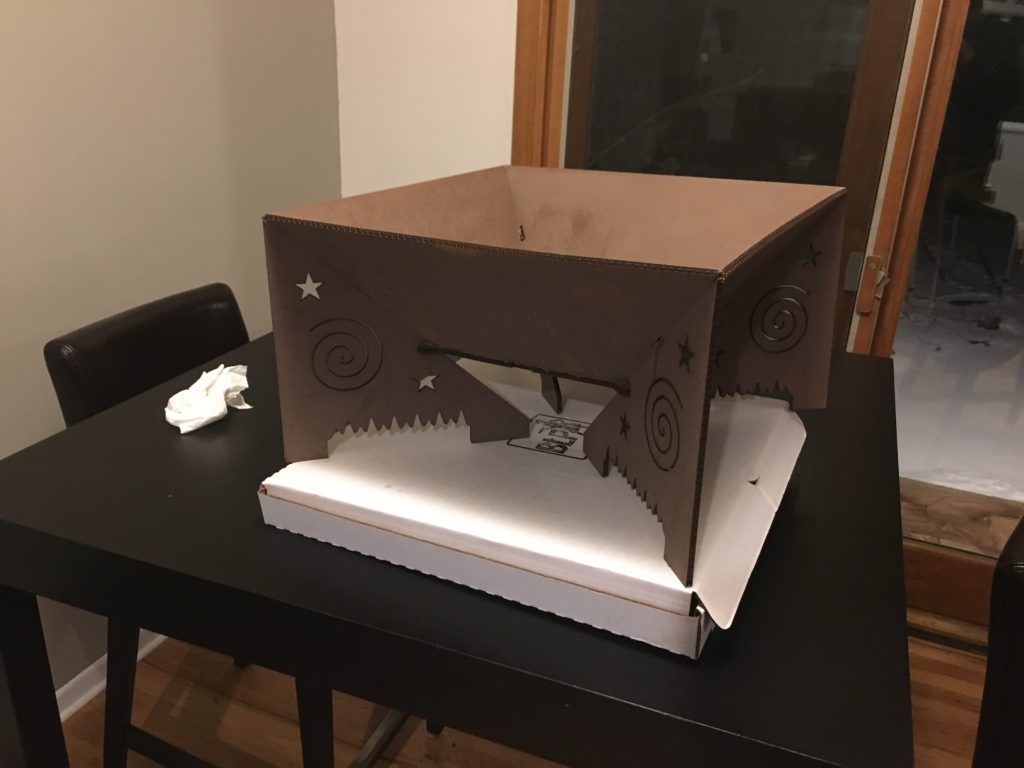 I got my inspiration from all the time I spent this summer around the fire with my friends, and my general affinity for fires. After looking at all the circular designs online, and realizing it would be impossible to print these shapes, I stumbled upon some square fire put designs that could easily be laser cut and assembled using limited adhesives. I found the most inspiration from the picture above, which I tried to base my design off of as much as possible. I liked the idea of making something ironic and funny as well, and was okay with making something that didn’t necessarily have a functionality but replicated an everyday object using recyclable materials.

My vision for this project was to design the fire put out of 9 pieces, and to adhere them together using superglue. I could laser cut the pieces using the laser cutter and fit them all together afterwards. I wanted it to be easy to put together, and to look and function just like a real fire pit, other than the obvious. I began by desigining on SolidWorks, and came up with the design below

Once I had a physical design, I needed to apply an aesthetic to it. I chose to apply a space/night sky aesthetic to my piece since I always associate looking up at the night sky and having a fire. The spiral on each of the 4 leg pieces are supposed to look like large circular galaxies that are popularized in cartoon renditions of space. The stars (obviously) resemble the stereotypical shape of stars also as portrayed in cartoon renditions of space. I feel that the square shape I went with gives the fire pit a contemporary and modern look. If I had to define an aesthetic for my piece, it would be
“if Neil Degrasse Tyson had a fire pit, what would it look like?”. You can see my design with its applied aesthetics in the pictures below

My ideal design process would have been to laser cut the 9 pieces and adhere them to one another using superglue. I was hoping to keep the natural look of the cardboard for my piece, but unfortunately that did not last. It took two tries to succesfully laser cut the pieces, as I had miscalculated the thickness of my cardboard and it led to unexpected interferences. I finally got it on the second try. You can see pictures of this process below

The miscalculated thickness was not my only issue. The super glue would not adhere to the cardboard, and would simply get absorbed instead of drying. I simply would not be able to use the superglue to hold the pieces of cardboard together. I ended up trying hot glue after doing some internet research, which ended up working a lot better. I was actually able to adhere two pieces together without them falling apart! Unfortunately, along the way, I had ruined the visual appeal of the cardboard by soaking parts of it with superglue. It was still structurally viable, but the surface finish was ruined. I would have to apply some type of paint to cover this staining up, as the current visual appearance was unacceptable. Some pictures of the construction process are shown below

I decided to use a brown spray paint as my surface finish for this piece. I went with brown because it reminds me of wood and goes along with the ironic motif I was going for in this piece. The surface finish came out much better than I expected, as you can see in the pictures below

As far as my functional goal goes, I certainly achieved all of the ones I set out to accomplish. My fire pit looks and acts like a real fire pit, and could potentially hold a fire (short term). As far as the artistic goal goes, I certainly think this looks like a fire pit that Neil Degrasse Tyson would own. The star shapes, the spirals and the fire like design on the bottom of the stands combine together to create a pleasing aesthetic that I am truly proud of. The combination of the space/fire aesthetic is something I didn’t expect to come out as good as it did.

Next for this project, I will set it on fire. I am planning on putting all of the school work I have saved for the last 4 years and setting it on fire in my lawn. Although I would like to keep this, I dont think it will last very long in my home and I think it would be much cooler and more interesting to send it off with a bang instead of just throwing it away