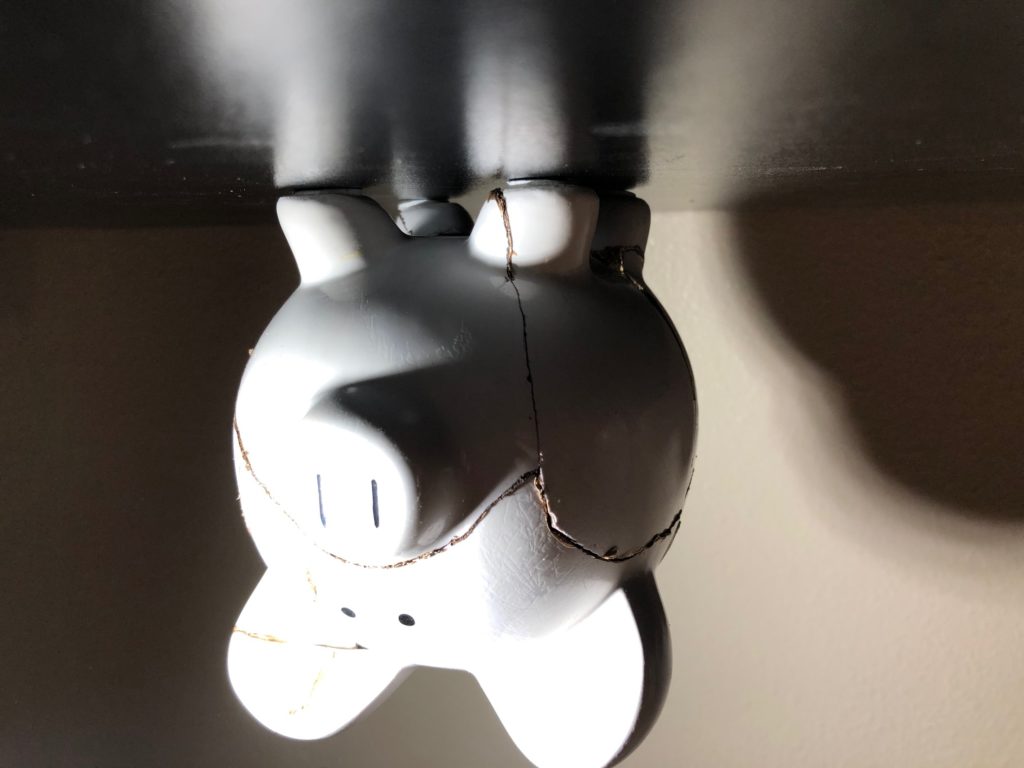 Kintsugi is a pottery technique that glorifies imperfection and embraces the cracks that bring us together. The art-form dates back to the Japanese shogun Ashikaga Yoshimasa, who sent sent a piece of pottery back to China to be repaired. After the piece return, lackluster held together with only staples, he decided to have it mended with gold. The piece took on a new found glory, and this method is still used (slightly modified) today.

“The world breaks everyone, then some become strong at the broken places.”
-Ernest Hemingway

The shattering realization of the one mug in the cupboard happened to slip off the counter top is a feeling so gut-wrenchingly awful that is seldom the cause for celebration. What if I told you that there was a way to piece back the puzzle from destruction and make something beautiful? That is my test with this upcycle project.

My subject was a $0.99 ceramic piggy bank that, from the thrift store. This item caught my eye because the idea of ‘braking the bank’ just to repair it with gold seems. The end aesthetic of a bank bleeding of gold really drew me in.

One really important key to the success of the re-construction was the forethought to place the piggy bank into a plastic bag before demolishing it. It saved time collecting pieces that otherwise might have been lost. With that said, the piggy was dropped from about 2.5 feet (which was a bit high) onto concrete, resulting in a few pieces to pulverize beyond reasonable repair.

The assembly process used a mix of the transparent industrial strength adhesive E6000 and a gold paint. They mixed together very well and it turned out to be a great alternative to the expensive kintsugi kits that can be purchased online. A chopstick was used to mix the two together and it was easy to spread onto the fractured surfaces.

The piggy bank’s final construction came out better than expected. While some pieces were lost to the demolition process most of the major identifying pieces came out with interesting fracture patterns. The adhesive also worked well, giving the final product a rigid durable feel.

Part of this project was exploring a new aesthetic, and for me that was an introduction to a philosophy of beauty called wabi-sabi. Beauty doesn’t have to be an attempt at perfection, it can be embodied by that which has imperfection or that shows wear.

As this class continues I want to take a closer look at how wabi-sabi can be woven into the design aspect.