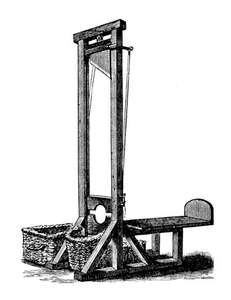 History is littered with interesting and intriguing objects. Being a person who is into history and finds the past intriguing, I decided to try and take an object from the past and turn it into something that could be useful today. My idea was the Guillotine Vegetable Chopper. The inspiration for this came from watching a video on youtube about the French era killing machine. However, I thought it would be fun to try and make this feared device something comical. And thus, the idea for this was born. Now, my idea is to keep the simple aesthetic of this machine and integrate in a cutting board on the bottom. The vegetable will be placed there and the blade will be able to be raised up by the user using a string. In order to get the additional force needed to cut the chopper that gravity will not suffice for, I will add in springs at the top of the mast and once the rope is let go, the blade, using the potential energy released from the spring and the additional momentum gained from gravity, the blade will cut the vegetable. This device, though it will be designed to be functional, is not being designed to be practical; meaning, using a knife and traditional cutting board will still be the optimal way to cut vegetables. An idea I am toying around with, for the added comedic effect, is to include a basket at the end for the chopped vegetables to fall in to. The reason for this is that in the days when death by guillotine was common, the head from the unfortunate soul condemned to that fate, would fall into a basket after being severed from the body. The basket for the chopped vegetables would serve the same use. If I think it looks good, I may try to make the wooden supports look blackened and burned as I believe this would create a more eerie vibe to this piece.

Below are very rough initial concept designs, one of the overall device, the other of the blade when it is pulled up. The springs shown would be compressed and when the rope is released, the blade would move down much faster and with more force to aid in the chopping process.