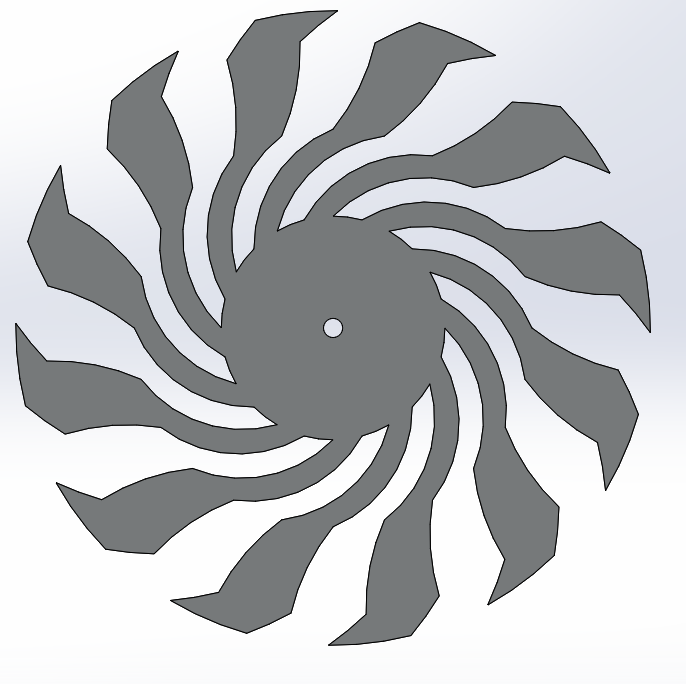 Blog: What are your current project aesthetics compared to 20th Century design movements? Also, cast your project into 3 other wildly different aesthetics; illustrate with annotated sketches at least.

My dynamic kinetic aesthetic creates an eye-catching abstract design. It does this by combining sharp edges, curves, and a couple other visually appealing components. The blades will be either acrylic or wood and be attached to the base of a wooden frame. The wood will be stained a dark color, and various etches can be made if time is left over. Additionally, I can play with adding a couple LEDs.

Due to the ease of cutting the blades I’ve created, a 20th century art movement could be easily created and compared to the one I have created. In fact, my aesthetic resembles abstract already. However, shown below are a couple other other potential designs.

Pop Art: Due to the geometry of the blades, I can add a 20th century pop to the already existing abstract design. This can be done once the blade is cut out or even cut into the center of the blade using small dots, comic art, or any other cultural object.

Cubism: Instead of changing the design of the blades, I can also change the design of the base with smaller pieces of wood or stain the wood in multiple areas. This would give the aesthetic of cubism which is a 20th century art movement.

Neo Impressionism/Pointillism: I also have an idea of keeping the base the shape, but taking paint and adding a 20th century design of neo impressionism. This art movement emphasizes spontaneity and randomness.