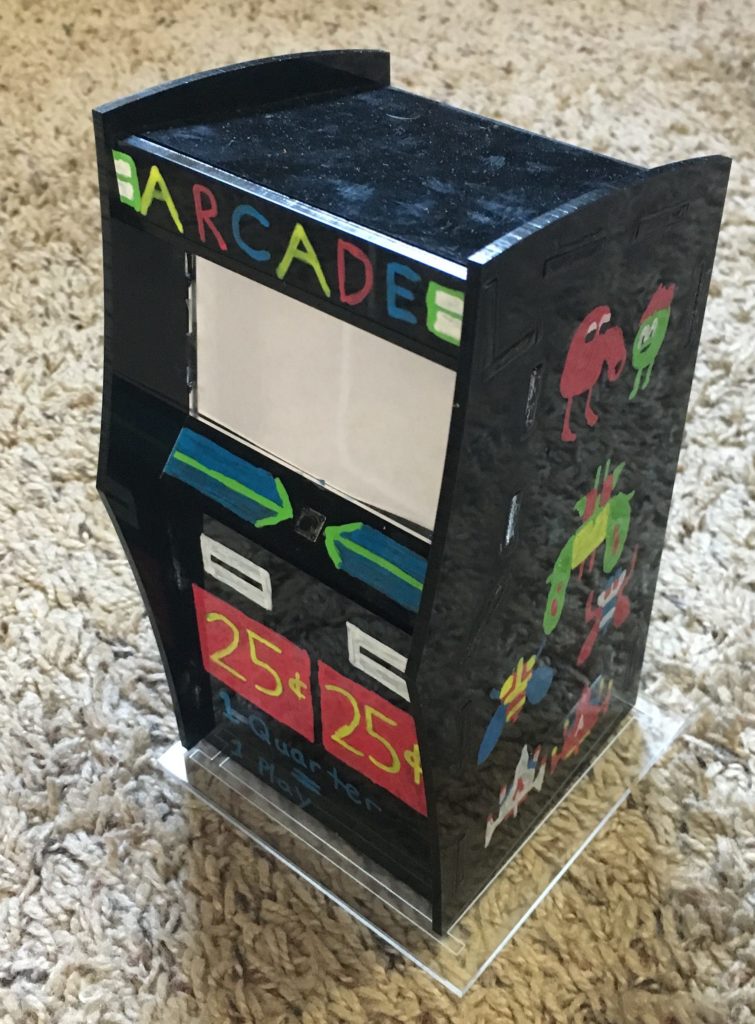 This project started with memories of arcade games, the lights, the music, and the joy that has come from experiencing a classic arcade. The idea was to capture these memories in a desktop sized piece. This pointed to the plan to create a scaled down arcade machine, that somehow encapsulated the aesthetic of an arcade.

This sketch is what started the process. The goal was to look like an arcade machine and have designs on the outside of it that called back to some of my favorite arcade games, such as Pac-Man and Galaga. Given the size, and the style of the design, laser cutting pieces that fit together made the most sense for the manufacturing. This allowed them to fit together, real arcade games have a similar look to an acrylic construction, and it leaves a hollow interior to fit any required components.

This is the design that was created in Solidworks, fully assembled, as well as the individual panels. The panel layout is what was given to the laser cutter to create these pieces. With the pieces cut they needed to be decorated like an arcade machine.

These are the final decorated panels, accomplished with simple paint pens, having Pac-Man and Dig Dug on one panel [5]. On the opposite side there is Galaga and Q*bert, [6]. The front is meant to represent a generic arcade front, with a the price, a place to accept the money, a return button, and the controls used to play, [7]. With the button activating the internal electronics. The top panel is usually where the name of the game is found, since this is meant to represent general arcade games and not a specific one, it reads ARCADE. The final back panel is my own personal design, which is my way of signing my own work, adapted to the bright arcade aesthetic [8].

Having just a fancy looking box that resembles an arcade wasn’t enough, I wanted to have some other component the rounded out the arcade feel. While I do not have the ability to make a functional arcade game, I have had some experience with arduino and wanted to integrate it to the internals of the machine. The way that I came up with to accomplish this was to have it play one of the theme songs of the games represented, and have a little light show associated with it.

Using a series of LEDs and the included buzzer with an arduino in something similar to the circuit seen in [10] this was accomplished. The process started with a print out of the sheet music for the Galaga theme, [9]. This was translated to arduino code, with the frequency values of the notes that were required and the built in tone function. The lights were then wired up with red, white, and yellow lights, in a pattern to resemble a ship exploding, as you would see in Galaga. This was then all controlled with the button that is seen on the front of the machine, press the button, the music plays, and the light sequence goes.

The overall budget of this project was much less than expected. The acrylic was really the only cost at about $20. Going into this I was expecting to have to purchase my own arduino to utilize, however my roommate Ryan had one and was willing to let me borrow it for the duration of the project, greatly decreasing the cost.