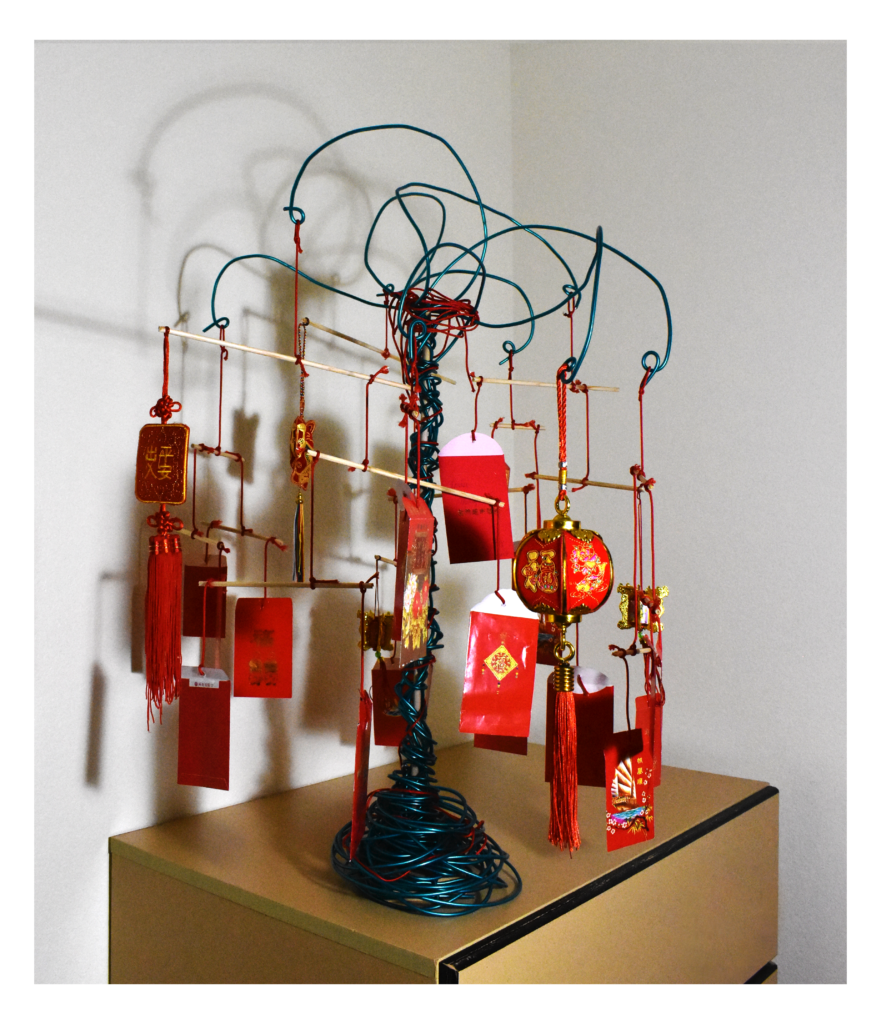 Looking at my initial sketches, I’d say the final sculpture stays true to their intentions, while being a bit more sophisticated than what I had first envisioned. My aesthetic was fairly locked-in based on my components, so it would be difficult to stray from the Chinese New Year look I was aiming for. As far as combining that with the look of a kinetic sculpture, I might’ve been able to improve the overall cohesion of the piece by coloring the wire red before assembling the sculpture. As is, the green clashing with the red still works, though it is rather loud. Although, I believe that was unavoidable, given the look of the Chinese New Year parts.

Were I to do anything differently, I might’ve planned out the overall structure more, which would have allowed me to color everything more uniformly, and maybe require less taking things apart and reassembling them. I don’t think I would work with these materials, were I to make another sculpture. The wire, while flexible, wasn’t really malleable enough to shape exactly how I wanted, so it would be challenging making another sculpture and not having it turn out in the exact way this one did. Based on the two main projects I worked on in this class, it would seem I have a propensity towards building trees. I’m not sure what to do with this information, other than try to push away from that space in future works, but I do like the natural, intricate look of a tree, so it would make sense that I try to emulate that when possible.

From the class as a whole, my biggest take away would relate to the omnipresence of aesthetics, where I hadn’t really considered it much before. Moving forward, I think I will find it difficult to ignore the look of an object, whether that means considering how the form relates to its function, or just how it looks in general: is it visually pleasing, does it make me think of any design movements of the past? I think this class has done a lot to open my eyes to the more visual aspects of everyday life which I hadn’t placed much emphasis on before.