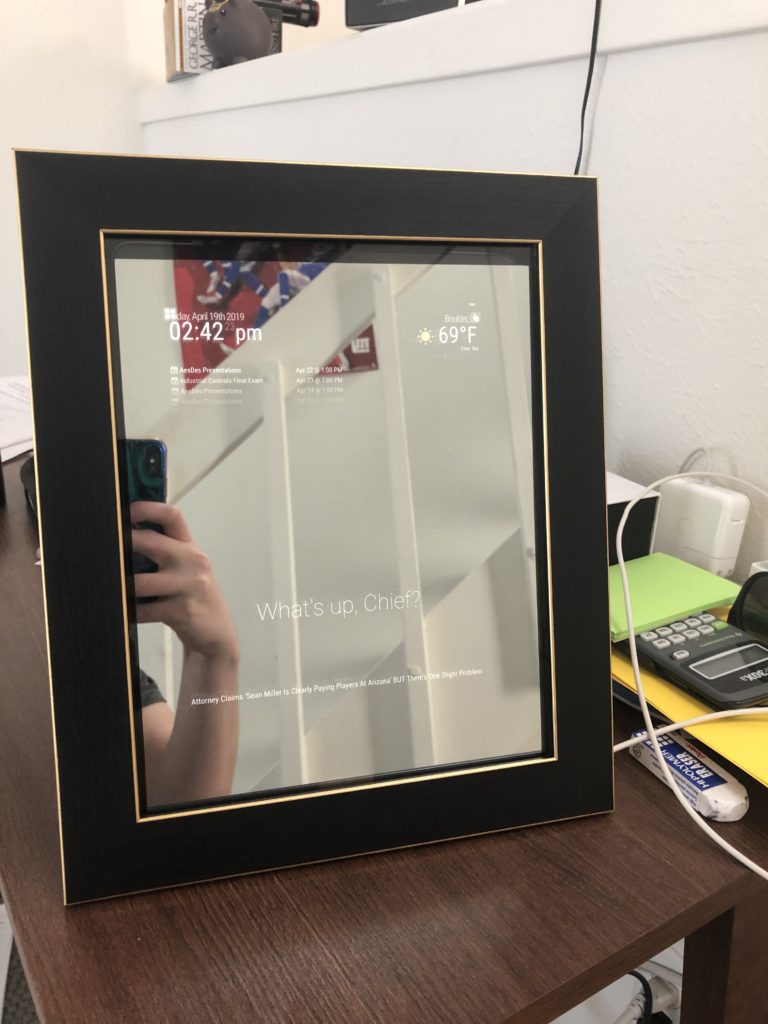 I chose to create an iPad smart mirror for my final project in this class because I wanted to create something that I can use beyond this class and have something with multiple functionality. I knew I needed another mirror in my apartment because I only had one in my apartment and thought it would be nice to have another. I have also been fascinated with smart mirrors because I have seen them in sci-fi movies and heard of people making them, so I wanted to give it a try. Originally, I wanted to make a large person-sized smart mirror, however, after some research I decided that it would be too expensive for my budget because a monitor and two way mirror that size are upwards of $100 each. I did some more research on smart mirrors and found some people using iPads as the monitor for smart mirrors. I knew that my dad had an old iPad 2 that he never uses so I got that to use for my smart mirror. Using an iPad scaled down all parts of the project including size, cost, and time. I was very happy with my final product, which can be seen in the featured image above. Some future improvements for this project I have thought about include adding more displays to the smart mirror dashboard such as sports scores and text and other app notifications. I would also like to find a better way to attach the two way mirror and iPad to the picture frame other than using black duct tape.

Reflecting on the semester as a whole, I thought I learned a lot, especially about different aesthetics and the design process. I never really realized the importance of aesthetics and what messages they deliver to the audience. I always thought an aesthetic should be added to a project or product once it was finished and if there was time. However, this semester I learned that every project has an aesthetic, whether it was on purpose or not. Aesthetics draw in an audience and delivers a message to the audience, so it is important to give some good thought and attention to detail on chosen aesthetics. I also learned how time consuming the design process can be, even for smaller projects. It is essential to draw out and sketch designs to fully understand how the entire project will come together.

My final project has a retrofuturistic and an art deco aesthetic to it. My iPad smart mirror has a retrofuturistic aesthetic because it is a product that tries to imagine what mirrors will be like in the future during the present. My smart mirror also has an art deco aesthetic because of the black and gold color scheme the picture frame and iPad has. I think I could have added more to this aesthetic such as adding a gold geometric pattern to the black picture frame, but I was running out of time and did not want to make the picture frame look unprofessional. Overall, I am very happy with my final project and aesthetic and will be excited to add on to this project in the future.