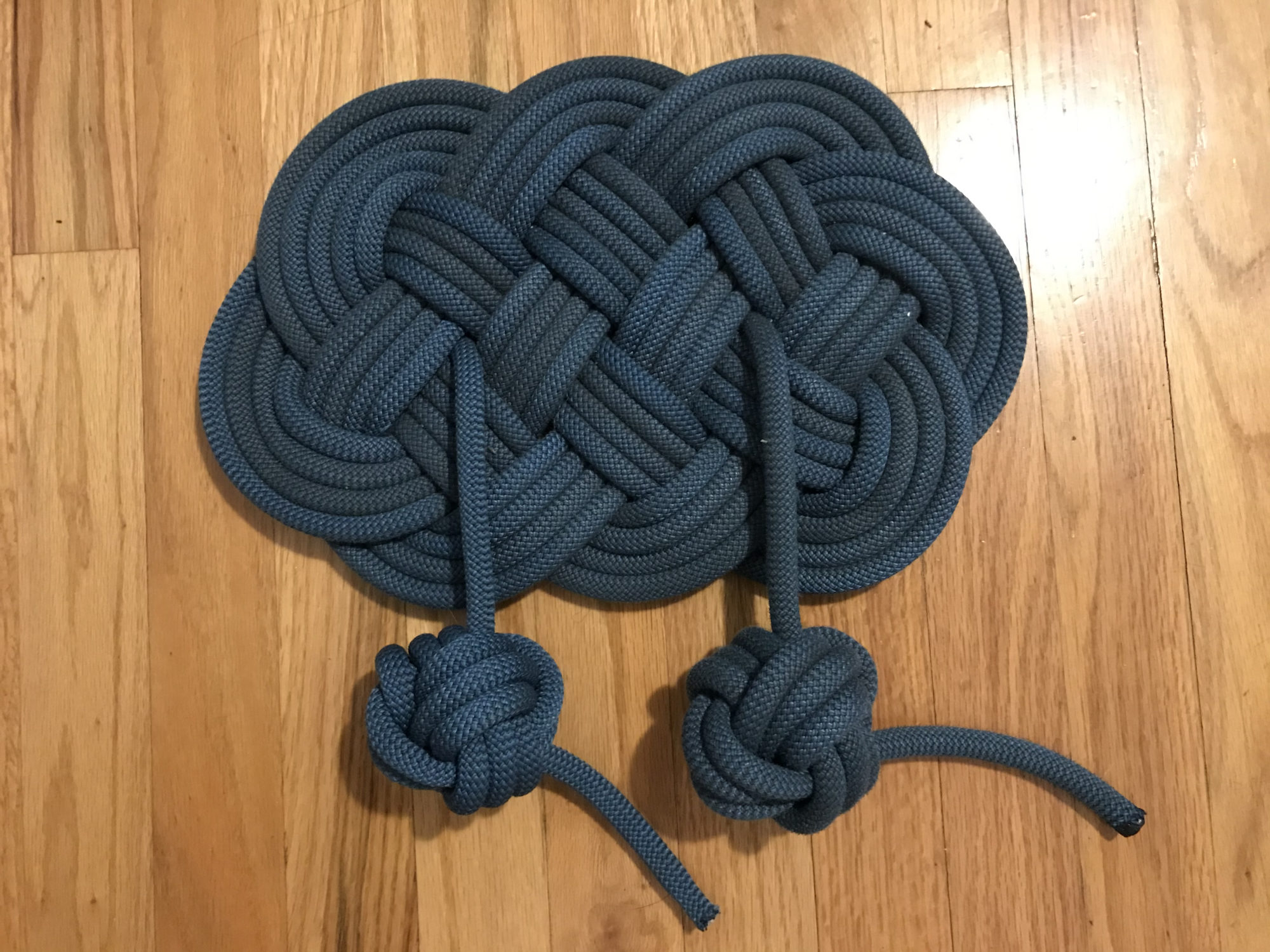 This project of the upcycle has been a very fun and interesting challenge! I started out by throwing around ideas about many different types of materials and designs before I started thinking about who I am and what materials I already owned. This was a big idea as I wanted the item I chose to be something that both meant something to me but also was something that I wouldn’t use for any other purpose and would, therefore, be a perfect upcycle material. I fell upon the idea of using an old retired climbing rope I’ve hung onto as it encapsulates all of this: who I am as a climber as well as a material that is useless for its intended purpose and would otherwise be trashed. Once I had decided on the rope, I began thinking of things I could turn it into to create a project I would be proud of and hang onto even after this course. Knowing the durability and strength that the rope still has, I began thinking of projects I could make out of it that would still take advantage of its material qualities, and not necessarily just an item to look at. I also thought it would be an interesting twist if I were to use rope in ways climbers are traditionally trained not to, therefore creating a twist on the original purpose of the rope itself. This idea led me to thoughts of chairs, rugs, and other items in the home where the finished product would be stood upon, sat on, or used in ways a climbing rope is not intended to be. From this thought process, I decided on the idea of a rug/doormat as climbers are never supposed to stand on their rope – creating a fun twist on an old piece of gear.

Once I decided upon my material and project, I had to figure out how I was going to create it. I looked into many different styles and patterns before I found one that I truly liked. The design I landed on is called an “Ocean Plait Knot” and can be woven using a single strand of rope. I set to work finding a template and learning how to tie this knot. I found the template shown below, took some measurements, and ran some numbers to make sure I would use the right length of rope and set up my pattern the correct size. To attain this pattern, it’s advised that you hammer nails into a board with the design drawn on it so you can weave the rope without worrying about keeping it in place. I cut the rope at a 50′ length and made note of how far apart the nails I would be using should be. I quickly realized that my mat was going to be smaller than I intended but I had already cut the rope. I decided to just go with it and see how it would end up and I’m so glad I did!

I then set to work after I hammered my nails in and wove the rope around and around. I got so into it that I forgot to stop and take pictures of the progress – I just kept going! You will notice the darker lines at the intersections of multiple lines on the template above – this is how I knew which strand of rope went on top of another. After a few passes, it became much easier to just follow the previous strand of rope through and I was able to remove the know from the nails to finish it off. When it was done, I have a few feet excess slack on both sides. As the thing had ended up being much smaller than I intended, I decided to use that slack to add interest as it would likely not be used as a rug anytime soon. I decided to tie a couple of monkey fists to finish it off. I’m very happy with how it turned out and while I likely won’t do much more with this one, I will likely make more of larger sizes in the future when I have more ropes to retire!