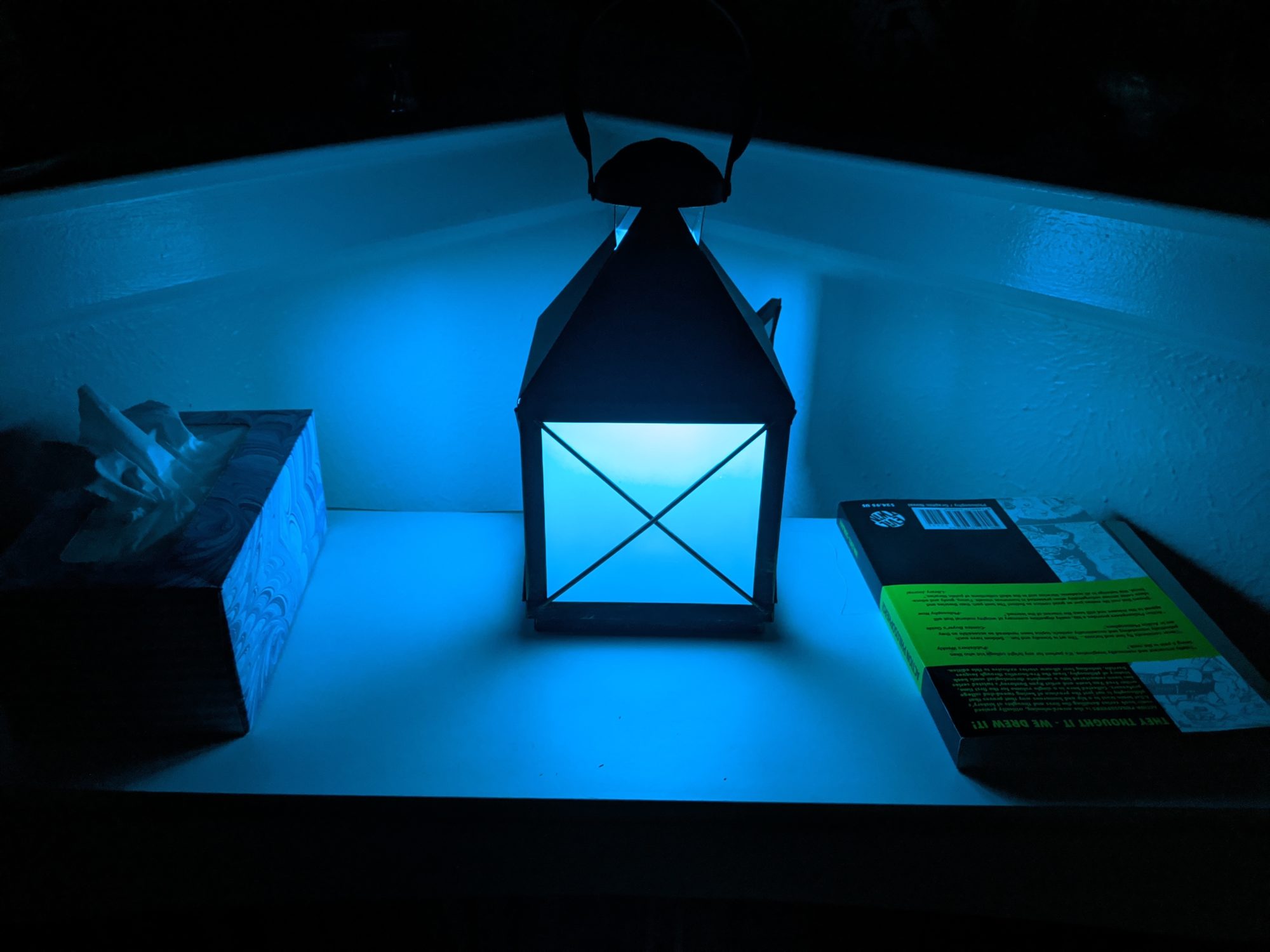 My original intent for this project was to develop a DM screen for collaborative storytelling games. Unfortunately, my design was largely dependent on access to the ITLL’s laser cutter and wood shop. Fortunately, there is a secondary project that I have been working on throughout the semester that incorporates a significant dynamic element and that is the dynamic storytelling environment I have been setting up.

Collaborative storytelling games like Dungeons and Dragons or Shadowrun are extremely important to me. I’ve grown up playing them and I’ve watched the role-playing environment of these games give people who normally had heavy amount of social anxiety the ability to comfortably interact with friends and explore aspects of their personality in a space where they felt safe. Throughout the 9 years that I have been playing these games I have gotten quite good at setting scenes and telling stories as the “Dungeon Master” and I’ve wanted to augment the immersion of the game with ambient effects like music and lighting. For this reason I have been designing a dynamic environment around the table where I normally play and run these games.

The ultimate goal for this environment is to be able to seamlessly transition into new soundscapes and lighting schemes by using a single physical button or switch without having to interact with a computer interface. The use of computers usually distracts me from the immersion of the game and hurts the flow of the storytelling. So far, this is what I have designed.

The first major component in this design is lighting. It needs to be able to run a gamut of colors and brightness in order to set a wide array of scenes for these games. It also needs to be bright enough on the surface of the gaming table for people to be able to read their character sheets. For this purpose I have a two-system solution. The first system is using three Philips Hue white and color bulbs.

[IMAGE OF HUE WHITE AND COLOR]

These bulbs have a practically infinite array of colors and connect to a Bluetooth hub that then connects into my houses local area network. The benefit of these bulbs, beyond their wide color rage, is that they have integration with many different platforms which will assist significantly with the final control system. The brightness of these lights is a slight challenge, however. Staring directly at the lights is far too bright but the lights are far too dark to light of the room with a lamp shade over them, and the lamp shades themselves look unsightly in the room that I plan on setting everything up. To solve this I have customized a few candle lanterns that were on a clearance sale at Pier One.

These lanterns were originally purchased with clear glass panels but I used a glass-fogging spray to fog the panel to disperse the light of the Philips Hue lights. With the addition of a small stand intended for mounting Edison bulbs a powerful dynamic lighting effect can be achieved.

I created three of these lanterns in total and placed them around the room. Unfortunately, even with these lanterns on full brightness the room is too dark to properly read character sheets during a game of D&D. So solve this, my second lighting system has to com in to play: Arduino controlled addressable LED light strips.

These strips are powered by 12-volts and are currently being controlled by a bluetooth controller that is controlled by a rather lack-luster phone application. The goal is to get these strips (I currently have two 5-meter rolls) connect to Arduino nanos that I will connect into my main control system for the room. Currently one of these light strips is connected around the rim of the gaming table that I am using to provide some extra light in the room and some cool under-lighting for the table. The other strip is not currently in use but I am intending to use it to cast some light on the top of the table to make it easier to read character sheets during a game of D&D.

The second component of this dynamic environment is the soundscape. Most of the music I have used in the past for these games has been curated into playlists on the application Spotify so it is extremely important that the final control system can interface with spottily properly. It is also important that the physical sound system is powerful enough to bathe the room in sound but also have enough control to quickly change between loud combat music and calm background music. I want to be able to have full control of music volume without having to open a computer. For this system I am currently using a SP2500 High-power 2.1 PC speaker system from Corsair.

The sound quality of these speakers is fantastic but the main benefit is that they come with a separate control panel that allows for a quick change of volume with a physical knob. This will allow me to have full control of the system’s audio from behind the DM screen without the need for any further software implementation.

While I don’t want to have to use a computer interface while behind the DM screen, I do realize that what I want would be difficult to achieve without a computer. I plan on running all of the lighting and sound off of a computer mounted just under the main gaming table. The main concern is, what am I going to use to control all of this at once? After a lot of research I settled on an Elgato Stream Deck.

This device is essentially just a set of buttons with tiny screens in them that can be customized to do whatever you want. The software that runs the Stream Deck integrates smoothly with both Spotify and Philips Hue so that with the press of a single button I can change both the Hue lighting and the soundscape. The only issue that remains is integrating the Arduino-controlled LED strips into the control system.