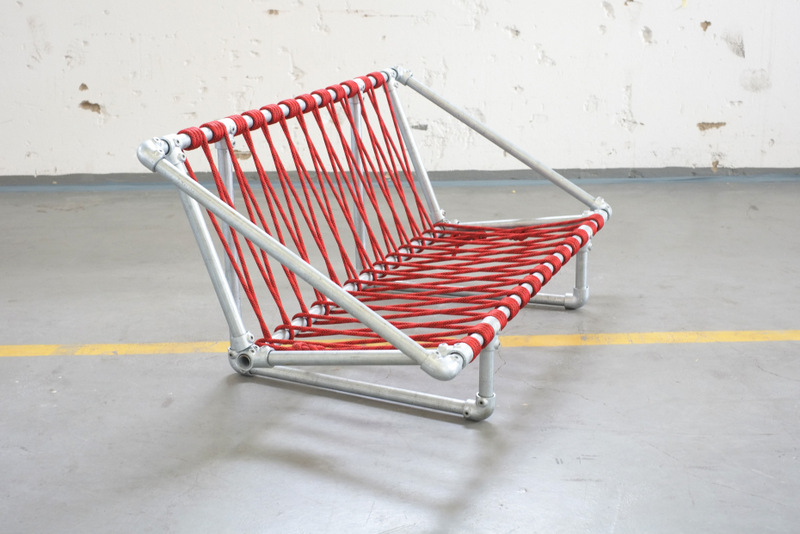 The vision for my project began pretty simply. I wanted to create something that I would keep and use down the road and not just something for this class that I will forget about after May. The use part was also important to me as I wanted it to be something that is used for something and not just an object to observe. Finally, I wanted to make something that demonstrated in some way an aspect of who I am as a person. While I was thinking about these things, I also realized that I will need furniture for my house next year as I will have some roommate change-over and will lose a couple of places to sit. With this in mind, I decided I wanted to create a piece of furniture, specifically a couch. Thinking about aesthetics and playing off of my upcycle project of using retired climbing rope, I decided I wanted to go with a more raw look and build it out of something simple but something that would also stand up structurally to being loaded. Looking into some things, I came up with the idea of the below-seen pipe couch with a metal pipe frame and a climbing rope platform.

I liked the function of this as a TV couch as it’s low to the ground and looks unique but I more specifically liked the aesthetic it had. Building from an aesthetic of industrialism, I started to do some research. Looking at modern buildings like Chipotle and similar restaurants, as well as office spaces, I began to see more and more of this industrial, exposed look that I was going for. Seeing the open ceilings with conduit and ductwork running, as well as the tables and chairs with exposed pipe as the structure ensured me that the aesthetic I was searching for was for real. A few examples of these can be seen below.

I also liked the idea of the climbing rope and how it fits into the branch of industrialism yet with my own personality and little tweak on the aesthetic. To create this, I will use the CAD model I have made to determine what fittings and lengths of pipe I will need, I’ll get these resources from Home Depot and assemble the frame here at home. I will then take my retired climbing rope and weave it (likely more densely than the model image shows them doing so) and create the platform to sit upon. This should be the most interesting and exciting part of the build as it begins to finally take shape into something functional. I’m excited to make it happen!