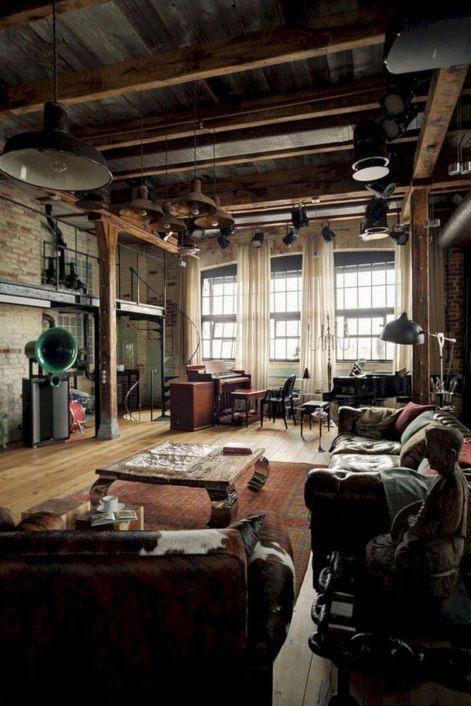 When one thinks of the aesthetic of industrial chic one might often think of a place like Rayback collective. Lots of exposed piping, lots of dark colors and dark metals, light bulbs in cages, etc. This is a really neat aesthetic which can be surprisingly expensive if one looks into getting an “industrial chic” table. This ironically is the antithesis of what I believe industrial chic was built around. If we, for example, look at the “ideal” industrial chic apartment completely unfurnished it would likely have exposed brick, exposed rafters, large windows, and probably a nice view of a city probably from Brooklyn. While this is considered a nice place now what with the properly insulated windows and walls, a place like this would be considered quite spartan and unpleasant back in the day as it was probably a spare room in a warehouse. Many times places like this were sought out by artists living in the city as the large space was necessary for constructing larger artistic pieces, and the location outside of the city in grungier neighborhoods was out of the necessity of a low cost.

Continuing on the idea of low cost, these thrifty artists still needed furniture like the rest of us. I can only imagine these artists had to prioritize their meager livings on the necessities of life like peanut butter sandwiches, bourbon, and nitrous oxide. Thus they were forced to make furniture out of cheap, available materials such as construction lumber and piping. Furthermore, these artistic ragamuffins would not have left the space empty and drained of artistic cultivation, nay they would have decorated the space accordingly using the space to their advantage to create a feeling not of an empty warehouse, but of a warm creative space.

As these artists began to gain traction these and showings in spaces like this became more common, more and more people began to seek out these creative spaces for their own. Impostor lumberjacks, sporting the newest doc martins and a freshly waxed mustache began to move in and raise the rent. The furniture built from necessity became hip and manufacturers such as urban outfitters began to peddling “DIY” goods. Thus an aesthetic born out of creative necessity, rejection of the superfluous, and rebellion against unnecessary spending became reduced to a kitchy insta-worthy marketing scheme for the MAN.