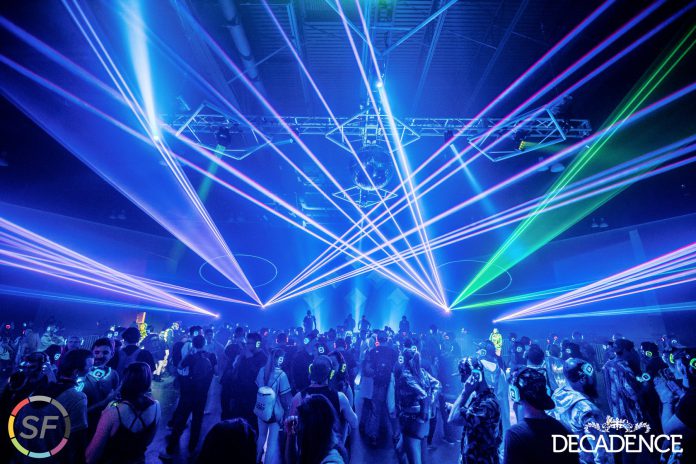 The aesthetic I am exploring is a raver aesthetic, I will be going into what a rave is, what a raver’s aesthetic consists of, and the history behind it. The reason I chose this aesthetic is that my favorite genre of music is EDM and rave culture is a part of EDM and festivals. I have listened to various EDM since I was in 5th grade. I have grown to love the aesthetic and culture behind it.

A modern-day rave is an organized dance party featuring Electronic Dance Music (EDM). These raves are held at various locations and can be considered festivals depending on the size of the event. There are DJs who play at these raves and mainly it is EDM, however, the specific genre of the music can vary as EDM is an umbrella to all kinds of music. The aesthetic of a rave involves lights against a dark background, neon colors, and loud EDM. Many raves have lasers, fireworks, and visuals on a screen. The visuals are usually optical illusions with bright colors and flashing lights. The light patterns should accompany the rhythm of the music. It is a very euphoric environment filled with positive attitudes and people letting loose.

The origin of raves can be traced back to the 1950s which “raves” would describe wild parties in that era. The youth has been a huge influence on rave culture and to this day is still a majority of the fanbase. Rave culture grew rapidly in the 80s as Steve ‘Silk’ Hurley’s “Jack Your Body” climb to the top charts. The aesthetic of raves at this time still is similar to today. As seen in the image below, there are still bright colors involved with very comfortable clothing.

Source: The History of Raves (vocal.media)

It is important to note that with the growth of the culture, drugs became more involved in the scene. With this, governments began to look down on raves and laws threatened severe punishment for the use of LSD and ecstasy (a common drug used during raves). Shoom was one of the most popular artists of acid house, and the bright yellow smiley face became a movement icon. If there is something we know, it’s that the youth is always rebellious. The smiley face paired with the lasers, lights, glow sticks all made the raver aesthetic up.

A big movement in rave culture was PLUR, which stands for “Peace Love Unity Respect” and it was started by Frankie Bones as he wanted to bring people together and make it known that everyone was welcome at these raves. This has grown into a big part of today’s aesthetic. In many raves, colorful bracelets are exchanged as a sign of PLUR. These are called Kandi and are exchanged with a “secret” handshake to represent PLUR. Kandi is traded among ravers and actually has a set of “unwritten” rules behind it.

A raver is considered to be a person who regularly attends these events. A raver’s aesthetic is heavily focused on bright neon-colored clothing, usually very breathable and comfortable as the raves involve a lot of dancing and movement. Costumed themed raves are a common thing, such as “Supernatural” a Halloween-themed rave that happens annually. The clothing now is a lot more open compared to the 80s. By open, I mean revealing, almost bathing suit-like, where men are shirtless due to the heat that is caused by thousands of people packed into a building and dancing around each other. A popular festival is Electric Daisy Festival (EDC) and to show some of the bright neon colors the image is shown below.

It is incredible to see the scene grow so much from even recent years, this image shows Tomorrowland, a festival held annually and the growth is really astonishing. The aesthetic has grown with the culture and people. There are a lot more visuals and colors as you can see in the right of the picture but that has always been aesthetic, wearing funky neon colors and setting a more casual setting.

Source: Tomorrowland: How the festival went from a local event to a global phenomenon (weraveyou.com)

I hope I was able to shed light on the aesthetic and culture of the raver culture which includes bright colors, loud EDM, and a lot of dancing.

Frankie Bones on the Origins of PLUR (insomniac.com)