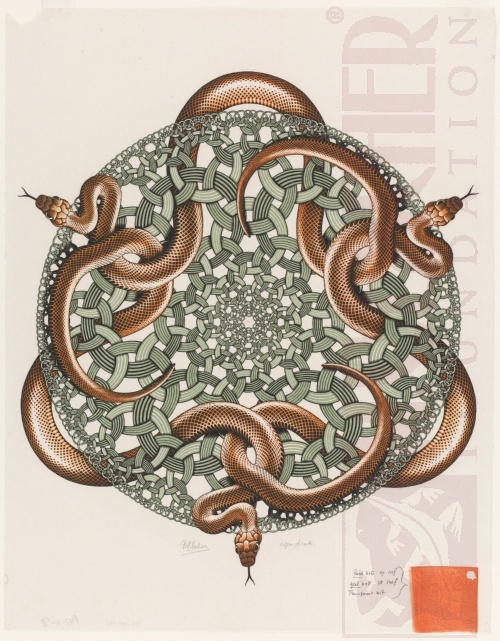 The Aesthetic that I would like to use for my Upcycle project is the M. C. Escher aesthetic. Escher was a Dutch artist who lived from 1989-1972, and he’s most famous for his graphic art that twisted perspective in a revolutionary way. Escher started out like most artists at his time, painting realistic snapshots of reality as close as he could. However, if you lined up most of his early work end to end, you can see the art slowly distorting and twisting as he adds his own personal style. He also started dabbling in pattern art, which is the aesthetic I am most trying to replicate with my project. I think that it would be cool to try to use different upcycle materials in a pattern like he does and see if I can get the same feeling of his art in my sculpture. More specifically, if I can get the perspective from a point to the surface of some 3D object, I can then repeat some pattern with recyclable materials. It would look more like the snake pattern then the fish pattern. Escher is one if my favorite artists, so I will try to make my project as close to his style as I can.

One of Escher’s many notable accomplishments includes drawing what would become the Penrose Stairs that were used in Inception. Roger Penrose actually received a personal art piece from Escher himself after citing him as the source for his three dimensional version. Escher went on to make quite a few of these perspective drawings, but my favorite has to be his piece Belvedere. It was made in 1958, and I’ve stared at it for many minutes and still been trapped by its perspective. I don’t know if I can incorporate this level of perspective into my project because it would be way too hard. However, I will try to put it in somewhere.