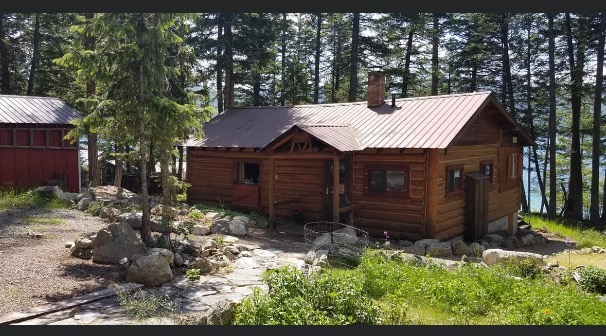 For my upcycling project, my artifact design was inspired by my grandfather’s artwork. As a young adult, my grandfather served in the military as a pilot, and then later retired as a commercial airline pilot, but after his retirement, he was able to dedicate his time to his true passion. I of course only knew him as an artist. Every room of his house was filled with his artwork. The majority were paintings, but there were also clay sculptures, and wood carvings ranging from tiny to very large. At one point, he even carved a giant grizzly bear statue which was displayed in the town park for years. I was always mesmerized by his ability to transform a blank canvas into a realistic scenic mountain view, or a block of wood into a cowboy caricature. The materials and tools seem simple enough, but the skill required is admirable.

When my family and I went to visit my grandfather in Montana over the summer, we would stay in our family’s lake cabin that was about a forty-five-minute drive from town. The original cabin was built out of logs by my great-grandfather. Its purpose was to be a fishing lodge because my great-grandfather loved ice fishing but the  Montana winters were too brutal to spend more than a few hours on the lake per day, especially because the commute took longer before the roads were improved as the area became more popular. The cabin was small as it only had one room and a single wood-burning stove to heat the inside. There was no bathroom because there was no plumbing. As the years passed, the cabin undertook several phases of renovations including an expansion for a dining area with a kitchen too. A large deck was also added to the back overlooking the spectacular blue lake.

Growing up, I made some of my best memories at the cabin on the lake. I can even remember the distinct smell of the cabin. Its construction was very rustic as the cabin was only built with the intention of survival. I think the renovations over the years have added to the rustic feeling of the cabin since everything was done to expand the usefulness of the house, not to improve its looks.