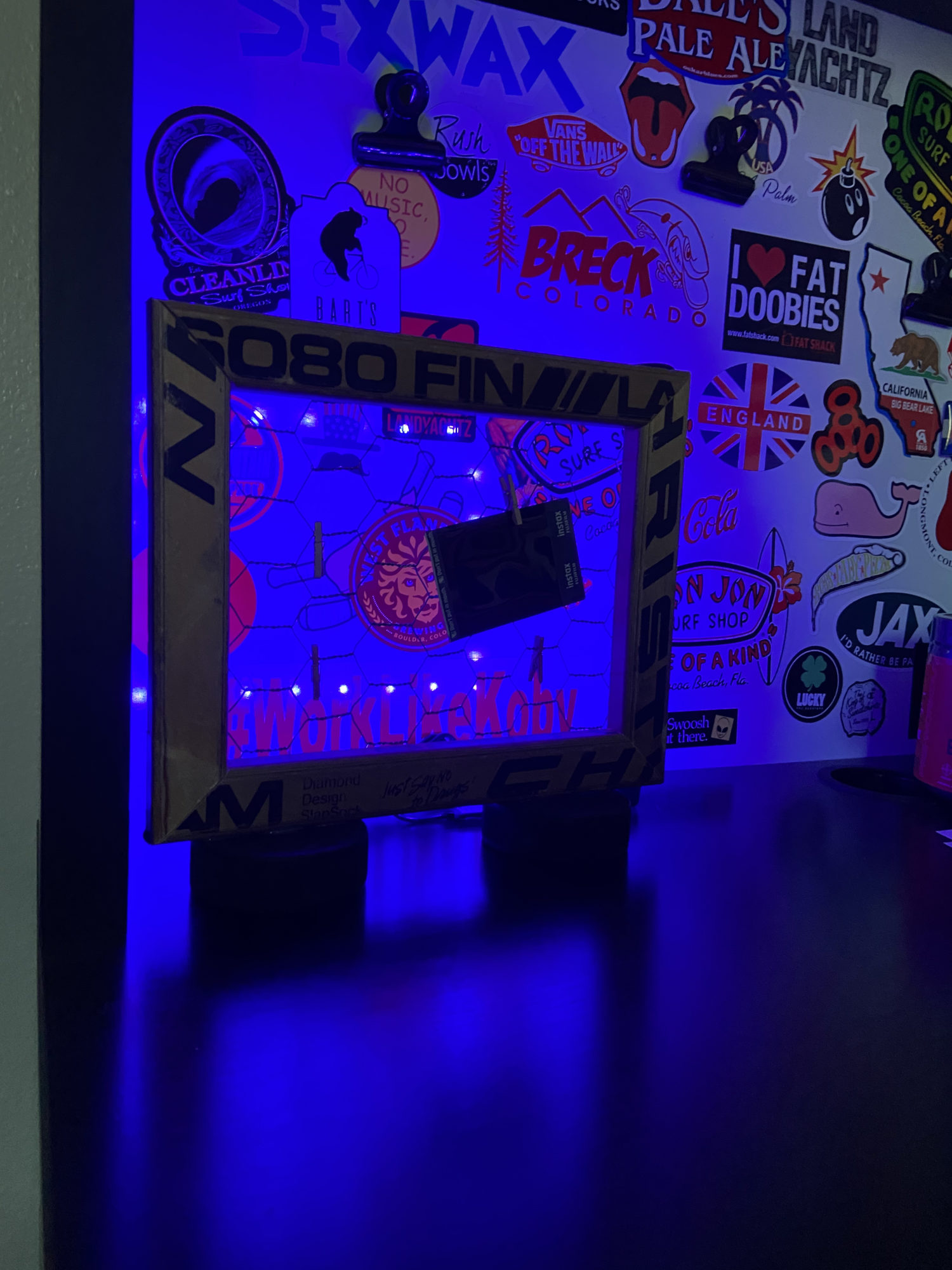 For the final artifact for the Upcycling Project I created a polaroid picture frame. The inspiration for this artifact came from a poster I have in my apartment that is shown below. From this poster, I wanted to combine the classic / retro aesthetic of old hockey sticks with a modern aesthetic.

How I envisioned demonstrating the modern aesthetic originally was through the use of polaroid pictures since they are a current trend that most people are fond of. However when given feedback from a previous post, I decided to add a battery powered adhesive LED light strip to the back of the picture frame. In terms of demonstrating a classic / retro aesthetic, using an old wooden hockey stick as the frame while maintaining the finish and original design of the stick seemed appropriate for my purposes. Another way of demonstrating the classic / retro aesthetic was by also maintaining the finish of the chicken wire and clothespins to hold several polaroids. A visual demonstration of the picture frame without the LED strip turned on is shown below.

For the fabrication process of this picture frame, I used a miter saw to cut the hockey stick used to the dimensions I specified. I wanted to produce a 10” x 8” picture frame and given the outer dimensions shown below, I believe I achieved this goal. While actually assembling the frame, I used a compressor powered staple gun to attach the separate pieces together. Complications during this process was to keep the sticks stationary. This was quite difficult given the kickback from the staple gun, and the diminished integrity of the clamps I used. A mistake in fabrication is shown below. Once the frame was assembled it was now time to cut chicken wire and to attach it to the back of the frame. Cutting the chicken wire was done using wire cutters which was actually very simple and not time consuming at all. In terms of attaching the chicken wire to the back of the frame, I used an electric staple gun to properly attach the chicken wire to the assembled frame. For the frame’s stand, I used two different hockey pucks from my parents’ basement and hot glued them to the bottom of the assembled frame. I accidentally put too much hot glue on the puck which ended up showing in the final artifact. What I previously explained is demonstrated below. For attaching the LED strip to the back of my frame, I purchased an LED strip which had an adhesive backing. Difficulties with this included, turning around the corners of the assembled frame without the strip lights showing from the front face.

Once the fabrication process has concluded, the final artifact is something I am proud of. Yes, there are some mistakes with how I assembled the frame together, and by how I messed up hot gluing one puck to the bottom of the frame. Given these mistakes, I am still happy with what I produced. In terms of functional goals, the frame itself doesn’t come loose, and the pucks themselves will not fall off. Given the purpose of my frame, these functional goals satisfied my functional requirements for this project. In terms of artistic goals, I think I have properly demonstrated the combination of the classic / retro aesthetic with the modern aesthetic. I believe the matte and worn finish of the hockey stick used for the frame accurately reflects the retro / classic aesthetic, while the LED lights on the back bring a more modern feel and some pop to the picture frame.

Video of the LED strip lights fading into different colors (Also can be seen in presentation video): IMG_2697

For future iterations of this project, I think a glossy finish to the frame will further drive the modern aesthetic while also maintaining the retro / classic aesthetic. This addition will also further reflect the lighting on the back to make the frame stand out more once the lights have been turned on. While it is off however, the glossy finish will still accentuate the modern aesthetic along with the retro / classic aesthetic.

The rest of the photos and videos were taken by me.