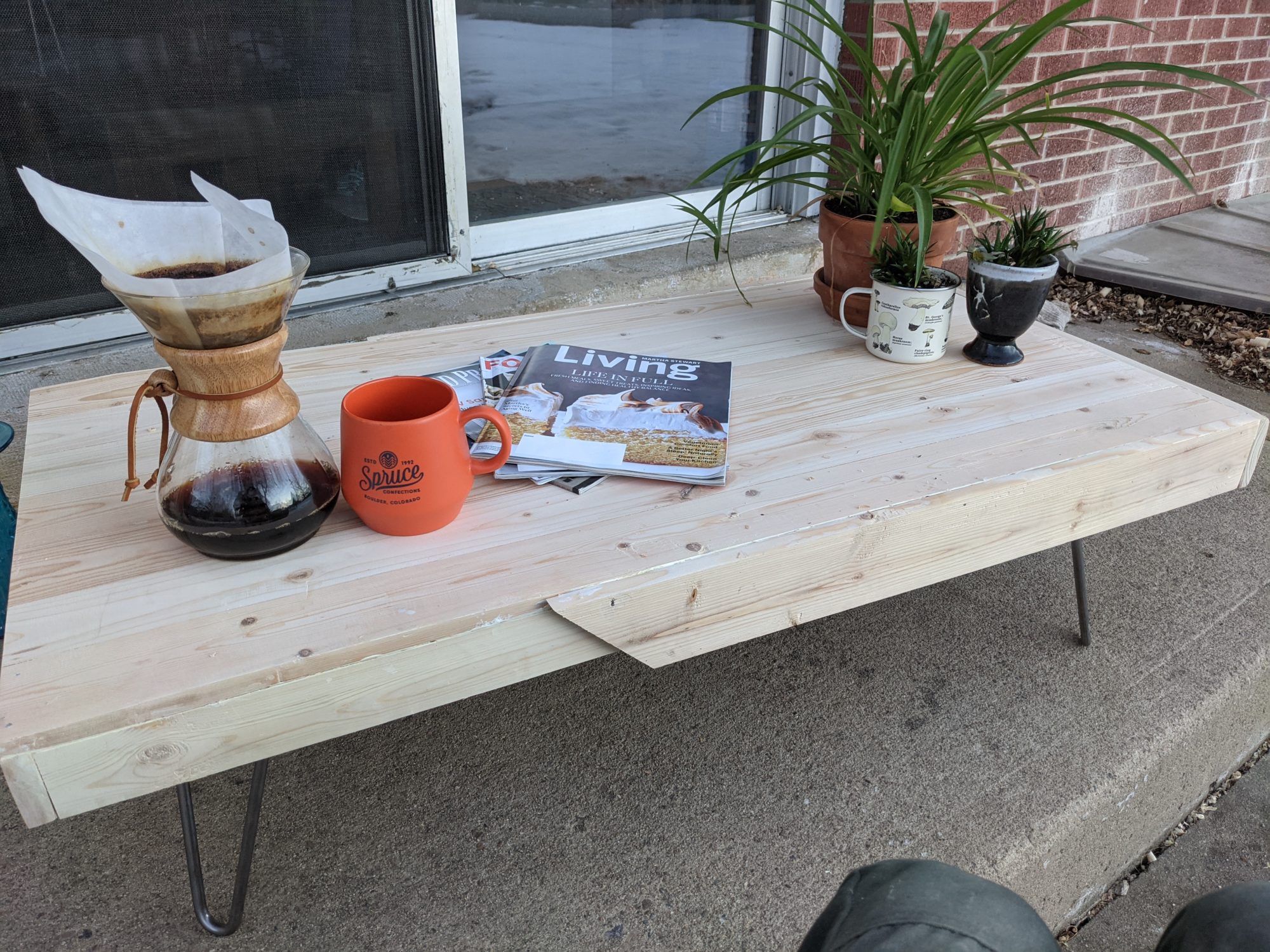 The conservation slogan that I remember most from my childhood is the 3 R’s: Reduce, Reuse, Recycle. These R’s are supposed to be applied, in order, to all consumable products that people use. So where exactly does Upcycling fit into the R’s? Is it reusing? Recycling? If you make something that you would’ve bought, is that reducing? It’s hard to say, but it’s easy to see the connection between the 3 R’s and Upcycling, the use of discarded materials to make a new usable thing.

For my upcycling material I used discarded wood. I work in the lab at Upslope Brewing Company, a local brewery. This summer I worked on the packaging team to make some extra money while not in class. Due to Covid, aluminum was in short supply, and we had to order from different suppliers than usual. All supplies that we receive pallets from want their pallets back, but for some reason the supplier that we ordered cans from a few times was not interested in getting back the wood that they put on top of the cans in order to strap them down. These particular tops were made of 1”x3” pine boards held together by metal gussets. As an ametur (and broke) woodworker I saw a bunch of good workable wood. My coworkers just saw them as trash, making it easy for me to claim them for myself.

Now, clearly these pallet tops were not usable in their initial form, but with a little work they became just as good as lumber purchased at a home improvement store. All I had to do was cut off the corners and they were good to go. Some boards had started to split where the force of the gusset was too great, or maybe from the straps being too tight. For the split pieces, I just cut the board past where the split was visible. In the end I had about 14 4’ pieces, 9 2.5’ pieces and 5 small pieces that I didn’t bother measuring.

When I say that the wood was as good as what you would get at a home improvement store, that isn’t really much of a compliment. Many woodworkers turn their nose up at these stores and, quite frankly, these stores aren’t aiming to sell to them. Essentially, the wood that I had would be fine for structural work, but needed quite a bit of work before they were propper for building something nice to look at. At this point, I wasn’t sure what I was going to build, but I knew that I wanted to practice my woodworking skills so I got to work making them true and square.

I started out using a belt sander with a coarse grit. This approach worked in truing and squaring up the lumber, but was loud, difficult, and dirty. Luckily, this little pandemic thing means that I have a lot of masks laying around that helped keep sawdust out of my lungs, but it wasn’t perfect.

Pic of me covered in sawdust and belt sander

After a couple hours of sanding, I decided that I needed a better too for the job. I quickly hopped on Amazon and ordered a bench plane. That was a mistake. Shortly after receiving that plane, I ordered a better one from Home Depot. While still not amazing, the Home Depot plane was much easier to adjust, leading to better results

I think that I still would have preferred to start with nicer wood or use more expensive power tool, but after several nights in my garage I ended up with usable wood (or atleast close enough that I would be able to clean it up once they were assembled into whatever it was that I decided to make.

Okay, so I have materials but I had no clue what I wanted to make. Before studying Aesthetics this semester, I had heard of this mid-mod thing and thought it was pretty cool. I didn’t really know much about it, but when I saw furniture that was described this way, I usually liked it. My main initial observation was that everything was quite angular with simple colors. That seemed pretty easy to recreate for someone with limited funds and square(ish) boards.

In this Aesthetic of Design class I learned a little more about the aesthetic. Describe Mid century modern here. Then I did a little inspiration searching. I started on the Mid-Century Modern Wikipedia page and saw the image below.

I was initially interested in the couch in the above image, but realized that I had no materials or skill to make the cushions. Without those, the couch would’ve been a bit odd. After ruling that out, my eyes were drawn to the coffee table. It was so simple and elegant. I decided that I would recreate that coffee table exactly. I started sketching and even made a few preliminary CAD models. It looked pretty good.

The more I thought about it, though, the more I began to poke holes in the idea. First, I wondered about the practicality of a coffee table that has all of those empty slots. I thought that maybe that would be nice if I had a large piece of glass to put over it, but I didn’t. Then I thought about how hard it would be to connect the boards at even spacing. Additionally, if my boards were anything but perfectly straight, the table would look really bad. Based on these thoughts, I decided to look for some different designs for inspiration.

A quick Google search returned the image above. I was inspired by the contrasting colors, the use of negative space, and the angle cuts in the middle. I decided that I could make something distinct from this, but inspired by it. Back to the drawing board.

My design is simple, as any Mid-Mod design should be. It incorporates the angle cut, a bit of negative space below the table top, and contrasting colors. I put off designing the legs in order to get to building. I just assumed that I would be struck by a stroke of genius and a leg design would come to me. (Spoiler: it didn’t)

Having mostly true and square lumber, I wrote out a checklist of how to turn that wood into my designed coffee table.

Easy right? After an entire weekend in the garage from sunup to sundown I didn’t feel like it was so easy. The first difficulty I had was in step 1. When gluing the boards together, my clamp jaws were too deep. I tried adding boards under the clamps, but they were too thick and that meant the pressure was applied to the edges. I finally found that if I applied 1 clamp on one side and 2 clamps on the other, with alignment boards on the sides clamping in the opposite direction, I could hold the boards securely. This solution, however, did not come quickly and I had to scrape and reglue one joint several times. One of those times involved my entire sawhorse setup collapsing on the ground with boards and clamps everywhere! It was what positive thinker would call a “learning experience.” I just called it a pain in the ass.

Luckily, for the attachment of the sides, I had a 90 degree clamp laying around that came in quite handy. Basically, I just placed the table top in one end and the side piece in the other to glue them together. Since I only have one of these clamps, I clamped the other side of the board with a C clamp then nailed it together for support while the glue dried.

Once the inner side pieces were attached, I cut the 45 degree pieces in a miter box. Again, just a tool that I had laying around. Using the same method at the inner side pieces, I glued and nailed the outer sides onto the table top. Upon inspection, I noticed that the side pieces weren’t perfectly aligned to the top of the table, which is integral to the Mid-Mod aesthetic. I need to plane and sand down the corners, but I decided to wait until the next morning so the glue would have enough time to dry before applying that much stress to the joints.

As I alluded to earlier, I didn’t actually miraculously come up with a leg design. In theme with this project, I had some extra coffee legs laying around my house from an old roommate. The hairpin style of the legs was perfect for my aesthetic. Once those were attached, the table was in its presentation form. I say “presentation form” because that is where I stopped for the purposes of this assignment.

I spent a lot more time planing and gluing than I thought and did not get to the finish. In the future, I still hope to add a finish to this table to help complete the look. Additionally, I am considering reworking the sides based on some suggestions from feedback I received from my classmates. I would like to miter the corners since they are non-structural and would look better that way. Also, I might add a different colored piece of wood that is the same width as the 45 degree piece to eliminate the corner.

I decided during this project that I really need a suitable work surface. Therefore, I will most likely take the legs off of this coffee table and turn it into a workbench. The goal would be to add a structure inside that fits into my sawhorses so that it is a collapsible bench, since I am moving soon.

In any case, I am happy with how this project turned out, but there is always room for improvement.