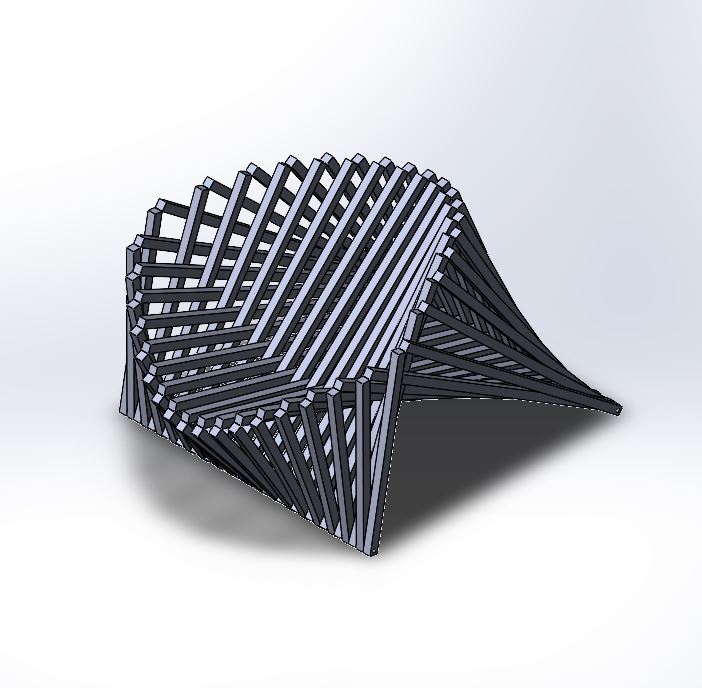 The chair mural is a functional piece of art. When folded flat, it can be laid against the wall as a decorative mural. When folded into its chair form, It can be used as a piece of furniture.

To start I’ll describe my inspirations. I needed a folding chair that folded as flat as possible, so I did some research, and come up with the three designs above. They all function as chairs, but also fold completely flat. The design that I chose to go through with was the Robert Van Embriqs (the one in the center) because of its uniformity (which I feel would be good for a mural), its many pieces (which also would break up the mural when in “chair” form resulting in a unique design), Its minimal hardware, but also just its coolness factor.

To start out, I drew some sketches of the form to get a general idea of scale (see above). I examined the original chair and noticed that I would have to connect the pieces at the ends with a through rod, and in the middle by some sort of flexible hinge. I also noticed that the pieces were about 1in wide and there were roughly 36-40 pieces across the chair. It also seemed to be 5ft tall when flat given some other images I reviewed. I found strap for the hinges which I will attach with screws. I took a trip to home depot to see what my options for wood are. What I found was that they don’t make 1×1 square stock wood (at least not at home depot), but they do make 1in thick plywood. I am scheduled to speak with Josh Colyer at the Idea forge to see if he has Ideas for sourcing/fabricating this wood. I also saw that Home Depot already has threaded rods at 3ft so I think I’m good to that end (no fabrication necessary).

The next step was to determine the lengths that I need. I started by making a model of one piece. This was pretty simple and I also added the home for the through rod. I then imported the piece into an assembly (multiple times) and used equations to vary the lengths of the rods. This was very difficult and I think that I didn’t do it in the most efficient way, but it worked, and I made it so I was able to modify certain variable to change the design. I messed with the variables until I got the form you see above. From here, I converted the lengths of the pieces into a table (see below):

Essentially I have 70 total pieces in which there are 35 sets of 2 pieces which each total 5ft in length. Knowing this will influence how I fabricate the pieces.

The aesthetic design that I will use as the mural is still up in the air. Originally I wanted to do an early American tattoo design (see above), but after some sketching of different themes and styles (see above), I think a more abstract form will look best when in “chair” form. The reasoning behind this is that a more abstract or modular design will still look intentional when broken up whereas imagery will most likely just look like cut up imagery when broken up (which is not what I want, I want the chair to maintain an aesthetic in both forms). Now I’m thinking of a pattern similar to a topographic map to give off an interesting texture, and I think this could pair well with wood burning.

In either case, I think I will oil the wood and seal it with shellac or a lacquer.

Above is the timeline for my project. It describes what I’ve done to date, what my future plans are, and some more detail with my fabrication process.

See above for the presentation video.

Joshua Greenburghttps://joshuagreenburgportfolio.weebly.com/
Originally from Stamford, Connecticut, I am a passionate maker, designer, and engineer interested in human centered product design. Design methodology and collective intelligence interest me as well and I enjoy collaborating with others to create new things. When I'm not making things with my 3D printer or working on my Graphic Tee-Shirt Design company, I enjoy exploring the outdoors. Rock climbing, Skiing, Biking, Running, Backpacking, Metal detecting, and soccer which are just a few things I love to do.
Previous Post
Floating Coffee Table – Design Preview
Next Post
Organic Desk Fountain Design Preview