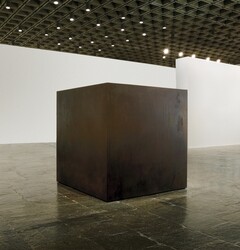 One of my personal favorite design aesthetics is minimalism. The minimalist movement begun in the 1950’s with artists such as Donald Judd and Tony Smith. Minimalist design can be identified by its simple nature. Only enough information is displayed for functionality or display of emotion, and nothing more. A classic example of minimalist art is on display currently in the Whitney Museum of American Art.

The Object Label in the museum reads as follows:

The size and form of Tony Smith’s Die, a 6-foot steel cube, was inspired by the Italian Renaissance master Leonardo da Vinci’s famous drawing of the Vitruvian Man, which shows the ideal proportions of the human figure set within the perfect geometry of a circle and a square. Hollow and raised off the floor so that all twelve edges are visible, Die’s dimensions imply those of the body, while its sheer volume suggests the form of a monument or tomb. Rich in allusions, the title Die and the work’s dimensions suggest a pun related to the chance roll of the dice, but also, most obviously, an allusion to death. As Smith noted, “six feet has a suggestion of being cooked. Six foot box. Six feet under.” Since Smith worked in a tool and die shop, Die also evokes the perforated block used to punch holes or blanks out of sheet metal. Thus, the title points not only to a method of fabrication, but to the idea that the sculpture, a massive form which punctures its surroundings, might be seen as a hole or void, displacing rather than occupying space.

Donald Judd had a similar take on art with a more modern twist. More than 20 years after the Die piece displayed above, he created these famous pieces.  that come in a variety colors and materials, all of them interestingly enough, have the same name.

Even a minimalist designs can portray powerful emotions, but minimalism is not strictly reserved for sculptors. Designers have taken this design aesthetic onto our personal electronic devices.

The i-Phone, with its single button. It has just enough options for interaction as needed to function. Leaving the consumer with an elegant piece of technology that can be carried around in their pocket. People are moving away from digital watches back to analog, again with just enough information displayed for functionality. This watch below has taken the minimalist aesthetic to the extreme.

Other minimalist designs are seen everyday in advertisements. Those with a lot of negative space, or dramatic typography. The Coca-Cola logo is a great example. It is so simple you can’t mistake it for something else. Smooth flowing white text on a red background, nothing more.

Minimalist designs can be found nearly everywhere, from the internet, to the packaging on consumer products. The more I look for it, the more I see it, minimalism seems to be a popular aesthetic.