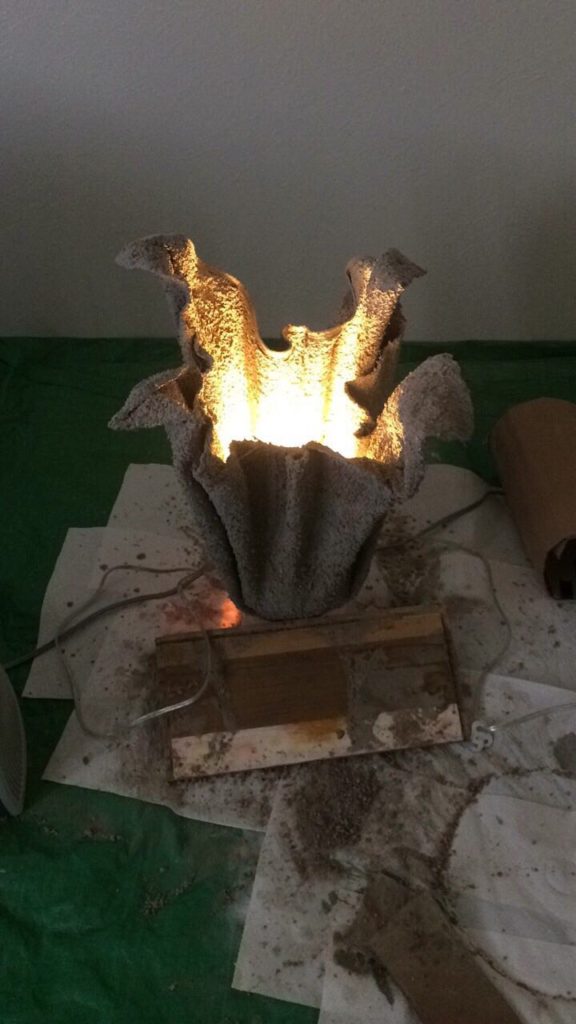 My main goal with this project was to make something I would actually be able to use. I already possessed a lightbulb outlet that wasn’t receiving any use and this became the main component in my upcycle design. The next step was developing the form and aesthetic of a fixture to hold this outlet. I began to research DIY bowls. This led to a wonderful cement planter project by Kim Smith (http://www.thehypertufagardener.com/revisit-draped-hypertufa-planter/) on her online magazine, the hypertufa gardener. Using this as inspiration, I sought to create a light fixture that would encompass texture and movement to further enhance the light feature it would accomadate.

My actual design process differed greatly from my ideal. In my ideal process, testing occurs after the assembly of the design. In reality, testing occurred much earlier in this design in regards to materials. The upcycle constraints meant that I had to use the materials readily available to me. This resulted in testing occurring earlier in the design loop, as it was integral to being able to weigh the pros and cons. This led to a much more loop based process, with materials such as paper and cardboard being considered, but upon testing being either too flimsy or rigid to achieve the aesthetic sought. After testing, I realized that a hanging light with fabric could somewhat achieve this aesthetic, but a major block was figuring out how it could retain some form of consistent shape. This led to another step back up my initial design loop with a newly defined problem of shaping fabrics. As mentioned previously, it was this research that then led to the cement planter design by Kim Smith.

Although I now had a clear design in mind, I still had to figure out how to attach the light outlet to the fixture. In previous group sessions, a classmate had suggested 3D printing a block that would hold the light outlet while also having a round base which the cement soaked towel could be draped over so it could dry securely in place. Keeping with the upcycle spirit, I achieved this same concept with a Tupperware container.

The light outlet threaded nicely into the lid of the container, and the ring secured the seal even further. I further improved upon the design by adding drainage holes to be the lid and bottom of the container so that the final project could be used outdoors if desired. The towel used for the fixture had to be precut to accommodate a drainage hole and to allow the light plug to be threaded through.

With these modifications I believe that I have achieved my functional goal. The final project works great near the corners of rooms as it directs light upwards off the walls. It also makes a visually pleasing pattern on the ceilings of rooms when used as a table lamp. Furthermore, if the lamp doesn’t match the aesthetic of the room, it can always be used outdoors as a focal point for a balcony or entryway. There is however concern in the longevity of the project. I utilized upcycled Quikrete as my cement mix. The final result is not as stiff as I would desire. Under a decent amount of force, the project can flex and form cracks, diminishing the aesthetic and structure.

I believe I am very close to achieving my artistic goals. The texture and movement I sought is certainly present, especially when looking at the inner walls of the light. The final form is what I desired, however I still wish to paint the project. I have yet to decide of this will be either a single color or two tone design. I wish to enhance the aesthetic of the movement from the towel, so it will most likely involve some form of fading with spray paint.

I plan to paint it this weekend, and will update when I do so. The light is already being used a table light in my living room, and will most likely remain there until moving out. In the future, I plan to make another fixture using the same base and light of the original once the fixture starts to break down. In this future design, I will use the cement mixture recommended by Kim Smith, and also try to use a crocheted fabric with a preexisting design and holes for the light to shine through.