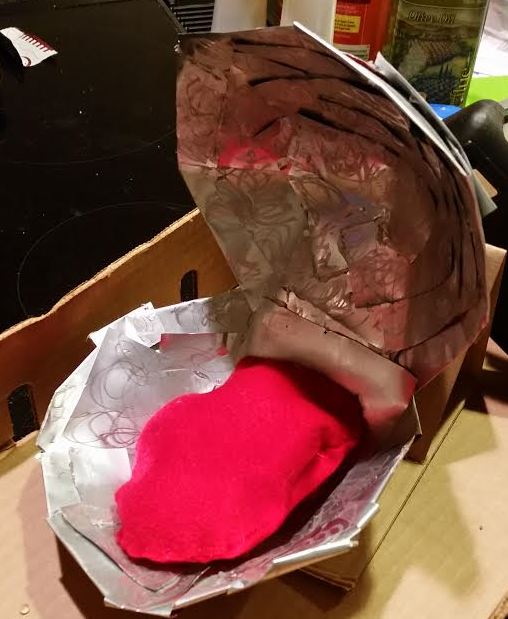 I wanted to create something that had a function, but still looked good.  For someone living in a small apartment, having something that serves a purpose is important.  I decided that I wanted to create a bowl as a place to store items like my keys and wallet, but I was stuck on a design.  While visiting my grandma a few weekends, I noticed that her bedroom had an ocean aesthetic.  She had a window curtain was of an underwater scene, with dolphins and fish swimming around.  Her bars of soap in her bathroom where in the shapes of seashells and a small picture of a sailboat hung on the wall.  I decided to use that aesthetic for the design of my project.

I had a lot of soda cans available since I recycle a large amount of them all at once, so I thought about making it solely out of cans, but it would be difficult to have it support itself without using a lot of cans, more than I had.

I saw someone had posted a tutorial on how to make bowls out of cardboard and decided to that use that as a center for my oyster.

In order to get a more shell-like shape, I outset the circle of the bowl to more on the outside.

I made a paper prototype to test the shape of the shell.  It didn’t hold the shape well since it was made of paper but the structure looked close to what I wanted.

For the cardboard core, I glued the slits together and let it dry in a mixing bowl overnight to help the cardboard shape in to what I wanted.

On the second version, I made the second oyster smaller, the diameter on the original was 12” and the new one was 8”.  On this one, I just hot glued the aluminum onto the cardboard.

Once I had the shell covered in aluminum cans, I used a dremel, a handheld sander, to create a more reflective surface on the cans, more like an actually seashell.

I found some old red felt and some cotton balls and used those to create a mussel for the oyster.

Functionally, my oyster box works well as a bowl and as a place to hod my keys, so my project works functionally.  Aesthetically, I feel that my box looks like an actual oyster which is what I was going for, although the aluminum on the outside was not as appealing as I hoped it would turn out.  Also, I was unable to find a material like a wire that would easily bend to allow the osyter to open and close so I just left it open.  The weight of the shell when it was open required a stand to hold the oyster up.

As for what’s next, I plan on keeping my box and using it.  I usually misplace my keys and wallet in the morning, so having a permanent spot for them will be great.  If I did this again, I would heat the aluminum to make it easier to work with. The aluminum want to stay in the shape of the can and made it hard to glue to the cardboard.  I would either do that, try a different material (the cardboard bowl shown earlier use plastic bags), or I would just paint the cardboard.  Below is the design loop for my process.