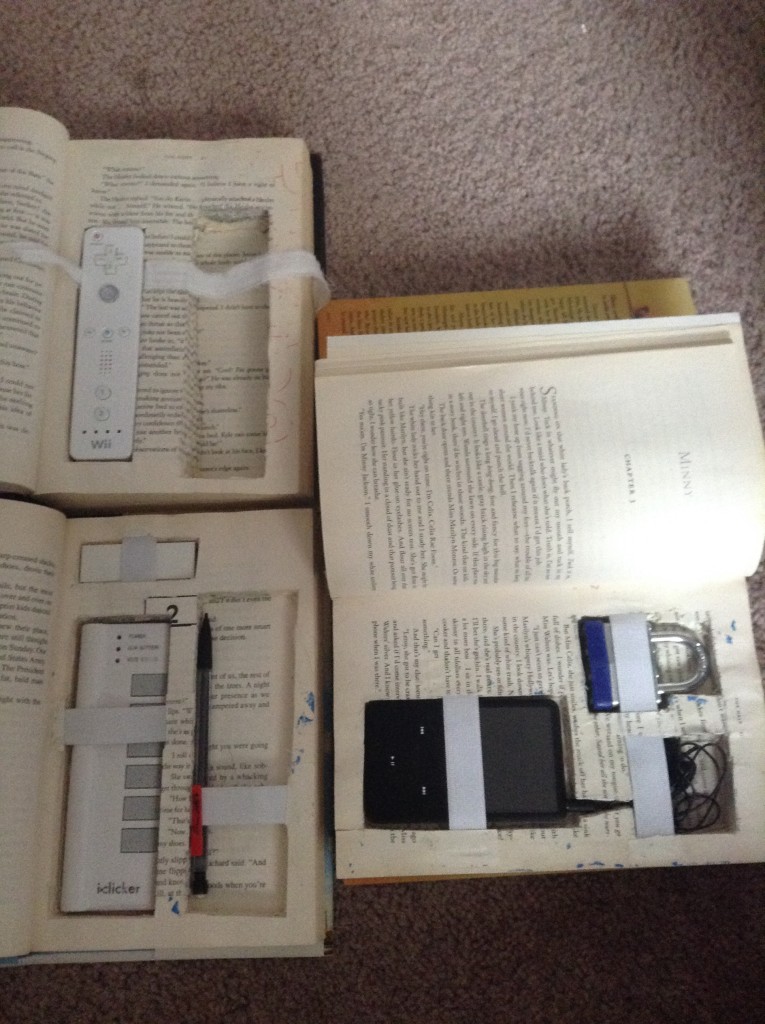 For this up-cycle project I took old books and made them into decorative storage. My inspiration for this is from a product that I had when I was about 8 years old. It was a book-safe that had the appearance of a book, but also allowed for storing valuables. The first few pages were real, while the back of the book was a plastic shell for storage. This inspired me to take actual books and make them into small storage devices, but that kept the appearance of the original book.

After doing some research, I found a number of different methods of up-cycling books in order to put things in them. For example, I found images of books being used as handbags, electronic device storage, safes, and laptop bags. In addition, they were made using various add-ons such as cloth, wood and elastic bands. These examples can be seen below.

Figure 4: Handbag Made from Up-cycled Book [4]

Looking at all these variations it helped me get a better vision of what I wanted to make with mine. I wanted to make them seem as natural as possible from the outside after the changes that had been made. I want to be able to put these on a bookshelf, without anyone being able to tell that they are even any different. In addition, I didn’t want to store just random things, I wanted to be able to take them to class or help me find things that I often misplace. For this reason I decided on making a cd case to help me sort my CDs, games, and DVDS, making a remote holder so I won’t lose them in the couches, a pencil box to bring with class, and an IPod/lock holder for the objects I bring to the gym.

In terms of aesthetics, there were a couple of things that I had in mind. First, like mentioned earlier, I wanted to have a natural book appearance. Something you would see in a library or on any typical bookshelf. Second, this idea somewhat reminded me of a spy movie. I feel like I have often seen hollowed out books used to hide guns, money, or passports where nobody would ever think of looking. It also reminded me of the national treasures movie where a secret hint or clue could be found in the book. This somewhat made me change my idea from just having a large square cut out into the book where everything would just go to having everything cut out in the exact shape of the item being stored.

At this point in time, I had made my way through the first steps of the design cycle, determining a need, doing research, and determining my pretotype. At this point, it was time to start creating the prototypes. For my first book I used it to store my IPod, headphones, and my lock. This way I could just bring the book with me whenever I go to the gym and everything that I often forget to bring will be in one place. Although I was relatively happy with the appearance of the book, it was much more difficult than what I had expected. I started by gluing the pages that I would be cutting together. However, once I started cutting into it, it took nearly 50 passes to get to the depth that I wanted and the corners often weren’t cut to the same depth as the rest of the pages. In addition, I realized I did a horrible job designing the positions of the elastic bands. For example, it is very difficult to take the headphones out of their position while leaving them plugged into the IPod.

For the second book, I decided to store some of the major components that I would bring to class such as my pens, pencils, erasers, and my clicker. This worked slightly better because I didn’t have to deal with the difficulty of the headphones, and it allowed implementation of multiple items being stored in one compartment. However, I did still have difficulty getting the items out of the holes meaning that either the elastic had to be moved to be more off centered, or removed all together.

For the third book I planned on storing my CDs. I bought some CD sleeves that I had planned on attaching to the inner edge similar to a regular CD case. This concept led to more difficulties than anticipated. In order to get the CDs to rotate without resistance, I would need to attach them to a ring system. However, this would lead to the CDs to extend through the edge of the page for it would be too large. For these reasons, I decided to focus on the remote idea as opposed to the CD idea. In addition, I wanted to take some of the previous problems that I had and improve on them. For this third and final book I decided to glue the pages after I had cut the holes out. This way cutting the deeper depths would be easier. I also got rid of the elastic bands so that the items would be easier to take out. In order to keep them from falling out, I made the holes slightly tighter. Plus I added a piece of cloth underneath to lift them up and out. This ended up being potentially the most successful of the three.

This proved that our design process was relatively correct. It gives an illusion of structure, but it is truly important to go back in your steps and continuously update your design ideas. I ran into countless problems and still have a number to work out. It was also very important to test the products to make sure that the idea in your head would accurately be represented in your real life product. If I were to continue this project, I would allow for more loops to be gone through making a better product at the end. This way a few more ideas could potentially be implemented. A couple more design changes that I had considered were to make the cuts in the center of the book and have holes on both the left and the right side so that there will be glued pages on both sides to attach clasps to. It would be interesting to allow for objects to slide so that the elastic band could still be implemented without blocking the object. Notches could potentially be used so one would be able to get a finger underneath the object and lift it up. Finally, I would have liked to add a sense of irony to my project. I didn’t think of this until I actually looked at the books that I had used a little closer, but it would be really cool if I had related the books to what they stored. For example, if I had put the IPod in a book about music, or the remotes in a book that had a theme of control.

Expectation Analysis and The Future

Now that the project is complete, my final product meets my vision on some, but not all levels. It does have the original aesthetic I was going for. They do give the appearance of that spy concept I had mentioned earlier and the exterior does not give away the fact that it’s not a normal book. The objects I hid aren’t as important or as secretive as those in such films, but they seem more important because of their location. However, the functionality is not as good as I was hoping. Getting the objects in and out of the books without letting them fall out is much more difficult than I had expected. I do plan on keeping these to hold things in and I especially will use the remote control one, but I do hope one day I will try and work on a similar project with enhance functionality.