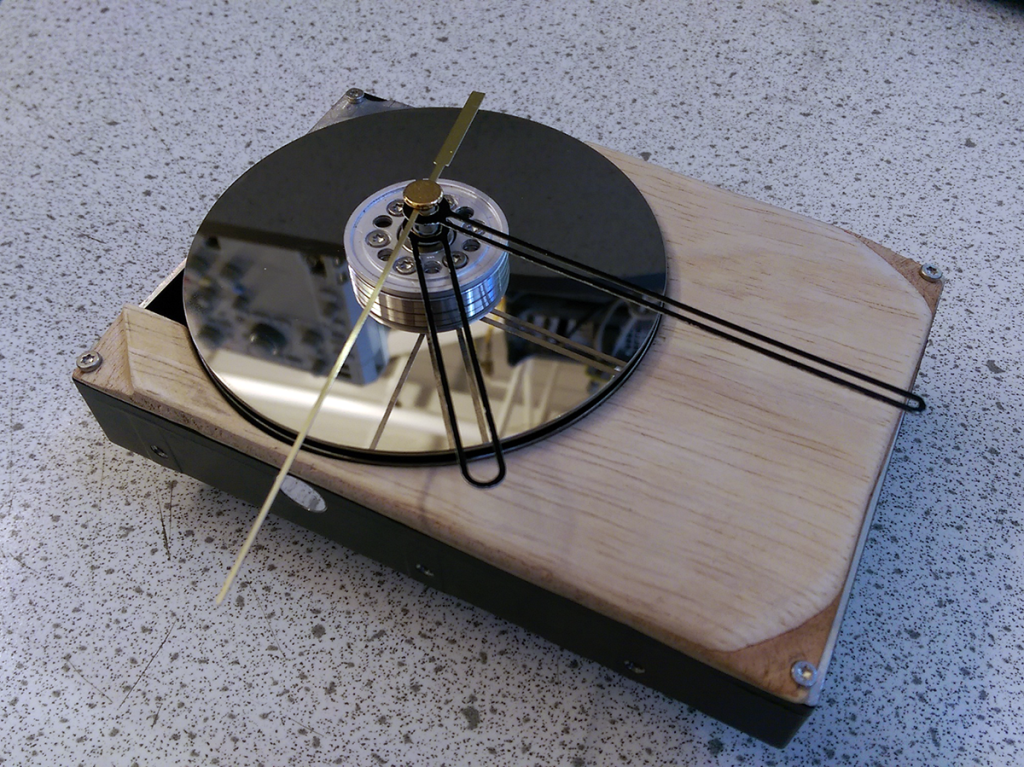 My upcycle project began when I decided to use paper as my recycled material. Half way through I felt that using fresh paper wasn’t really considered upcycling, and it was more like crafting something from scratch. So instead, to be more in the spirit of upcycling, I chose to recycle old electronics that have been in my basement for over ten years now, which I haven’t bothered to have properly recycled. I’m choosing electronics as my upcycling focus since it would be possible to make something based on the modern aesthetic.

With some Googling, I decided that I wanted to make use of the hard drive platters and to re-purpose it into a clock. The image below shows a hard drive with its outer shell removed and exposed platters, which are the discs that contain the hard drive’s data. At this point, the hard drive is most likely unusable since the screws used to fasten the back plate onto the shell are precisely torqued to ensure zero vibration, and it would be near impossible to find those torque values without any documentation to go off of. Furthermore, any spec of dust will ruin the platters. Since the hard drive is only 30 GB and was made in 2001, I have no concerns about trashing it.

These platters can be removed, which will allow me to install the clock mechanism. The clock mechanism I’m using is found in pretty much all cheap clocks, and they are from a brand called Quartz.

The image above is my inspiration for this project. I really liked the industrial look, but I wanted to clean it up in my version so it’s not so cluttered and hopefully more modern.

The design process was very much circular. Compared to our discussed design loop, I think the steps that were valuable included

For example, one of the project goals was to be able to mount the Quartz clock mechanism through the hard drive motor. The first idea was to drill a hole straight through the motor and insert the clock mechanism with ease. This led to the first problem where the hardened steel was not going anywhere. The largest hole I could drill in the surrounding aluminum was 1/4″, and the next possible solution was to use straws. The problem presented here actually is that the Quartz clock has 3 shafts to transmit rotation of each hand. The diameter of each hollow shaft was only several ten thousandths of an inch different, meaning that tolerances were a huge issue. I spent more than half the project time developing different straw diameters in attempt to make one straw slightly smaller in order to achieve a smooth fit. This process required more than just a few prototypes to finally get right.

I think my design process follows the ideal process fairly well. The only thing that is missing from the ideal process is the amount of time and frustration invested to make these solutions work. Also, sometimes not all the goal requirements are defined at the beginning. Towards the end of the project, I decided I wanted to add a wood trim to make it look more modern.

I started off with a piece of scrap wood and cut a hole in. Towards the refining process, one quarter of it snapped off, which wasn’t exactly the vision. I went with the flow and made the best of the situation to make something more interesting.

The vision for this project was to turn an already modern object, the hard drive, into something simpler and modern. The mirror finish matched with the textured wood would compliment each other in the modern aesthetic. Foremost, the main function of this upcycling project was to make a working clock. Without one, the success of this project in my eyes would not be possible. The functionality comes first, then the aesthetics come after. I think this should be the case in any design work. If something does not serve the purpose for which the author meant it to do, then there’s no reason to have it at all. This purpose can be functional or purely for thought, but it is important for the author to carry out his intention. While aesthetics may be an afterthought, it doesn’t mean that the effort between functionality and aesthetics should be 90/10. There should always be a balance.

After spending tens of hours trying to transmit the rotation of the clock mechanism through a small 1/4″ hole, I achieved the functional goal by having a working clock. The artistic goals of mine were not really set in stone. For example, the wood trim was developed spontaneously, and there was no reason for leaving a quarter of the circle off other than because I had manufacturing issues. This is the beauty of design in that the artistic side of things is not concrete and does not follow a set path. It is possible that the wood trim would not exist had it not randomly come across my mind.

I’m unsure what I will do with this clock. I may consider making another wood trim that uses stronger wood, and I may consider actually using the laser cutter to make perfect circles rather than doing it myself. In the mean time, I think I will hang it up on a wall in my garage. I secretly detest Quartz clocks because of the ticking of each second that becomes really loud if you focus on it. It is distracting sometimes to hear the tick-tock of a clock — and for that reason, it will probably go on the garage wall.