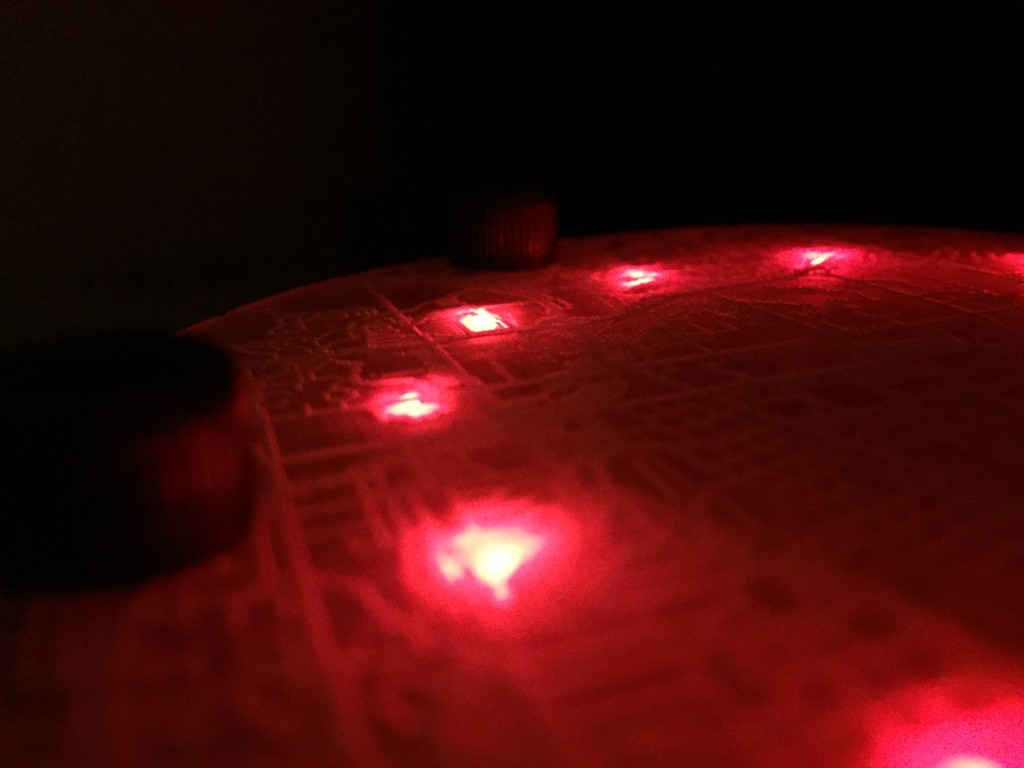 As a personal fan of the contemporary industrial aesthetic I wanted to capture it within my upcycling project. I appreciate the simplicity of this aesthetic, but also how it doesn’t sacrifice strength or quality. I wanted something that would be useful in my life, but also add a subtle intricacy that was not immediately evident. I chose to make a common household item, the drink coaster.

Not immediately certain of my final design intent, I scavenged through the Manufacturing Center and machine shop in the ITLL. I couldn’t find any pieces of metal in good enough condition or large enough, but I was able to stumble upon some engineered wood. This wood had a slightly rough surface, but a soft grain. Next I found scrap acrylic that was in great shape. I decided to use this to give the wood a finished appearance and also level it better, eliminating the need for tedious surface finishing. With materials in hand, I planned to laminate them together to complete the process, but as I was leaving I found the perfect material to bring the design together: matching black bolts.

Supplies in hand I began to process of manufacturing. I created a 3D model in SolidWorks in order to create a pattern for the laser cutter to follow. I also used this to engrave the circular geometry into the wood so that it could be cut with a band saw and mill. The overall process was fairly simple and the pieces fit together with little trouble. With it assembled I realized that I had plenty of room in the base to add some intricacies and keep them hidden to maintain the overall simplistic look.

I chose to inset a ring of LED’s that I found in the ITLL. The only color options were red or yellow. Hoping to add some warmth, I chose red. I wired the LED’s together, soldering the joints, and connected them to a 9V battery that I found a handy case with a switch for. I had to put a resistor in the circuit to drop to voltage to an acceptable level for the LED’s.

LED’s soldered together in a ring.

Once I had it all wired I placed electrical tape around the connections as I knew the space would be cramped and I didn’t want any wires to short.

With the LED assembly complete, I had to use a hole saw to remove the core from the large center laminate of wood. I also cut 10 holes in the top laminate layer to allow just the top of the lights to shine through, preserving the sleek aesthetic. Each light has a small amount of superglue holding it in.

With this complete, I had to cut another piece of acrylic to hold the electrics in. I found I had to make a spacer to give enough clearance, but this all resulted in a very tight fit. So tight, in fact, I did not even need to use the slots to zip-tie the battery pack down as it was held in purely through compression. With the bottom on, I bolted it all together and tested the fit. It all fit!

To hide the wires a bit better and remain true to the aesthetic, I chose to engrave the bottom with an edgy design.

However, once it was assembled, I found that the top surface didn’t appear sturdy. Therefore, to hide some of the imperfections, I chose to engrave the top with a personal effect as a graduating senior at CU. The top has a low quality image that, at first, appears to be random lines, but upon closer inspection is actually a map of Boulder.

While I recognize that this detracts from the goal of simplicity, the desired look couldn’t be achieved with the materials available to me.

To finish, I sanded the entire assembly together, making everything align properly as circular cuts are hard to make accurately with wood.

If I were to do the project again, I would probably use more lights and put them facing down onto the table. This lights up the table and gives a really cool aesthetic by expanding the size of the product without making it physically larger. I would also use glass instead of acrylic and much higher quality woods, possibly even metals.

Example of aesthetic when the lights project onto the table.

Ultimately I was able to make the coaster completely free of cost, from all recycled materials. The design cycle I followed wasn’t necessarily traditional. With a project that did not require a practical need, I was not limited in scope. I brainstormed many ideas in my head but could not come up with a concrete idea. Once I sourced materials, I found my inspiration for my final project. Writing nothing down, I went threw many possible designs in my head, but could not make prototypes as I was severely limited in material. Once I thought I had a completed product, I had to loop back and rethink my finish on the top as my material did not appear as clean as I originally thought it would. Ultimately, my physical design cycle was very linear in contrast to what is traditionally thought of as the cycle, however, mentally, I went through many theoretical iterations before making my first cut. By not writing anything down, I felt less limited in my design and able to make quick adaptations without ever becoming fully invested in one aspect. I learned a lot about stylistic choices throughout the process and it helped refine my personal style. Plus, I now have a great place to put my drink!