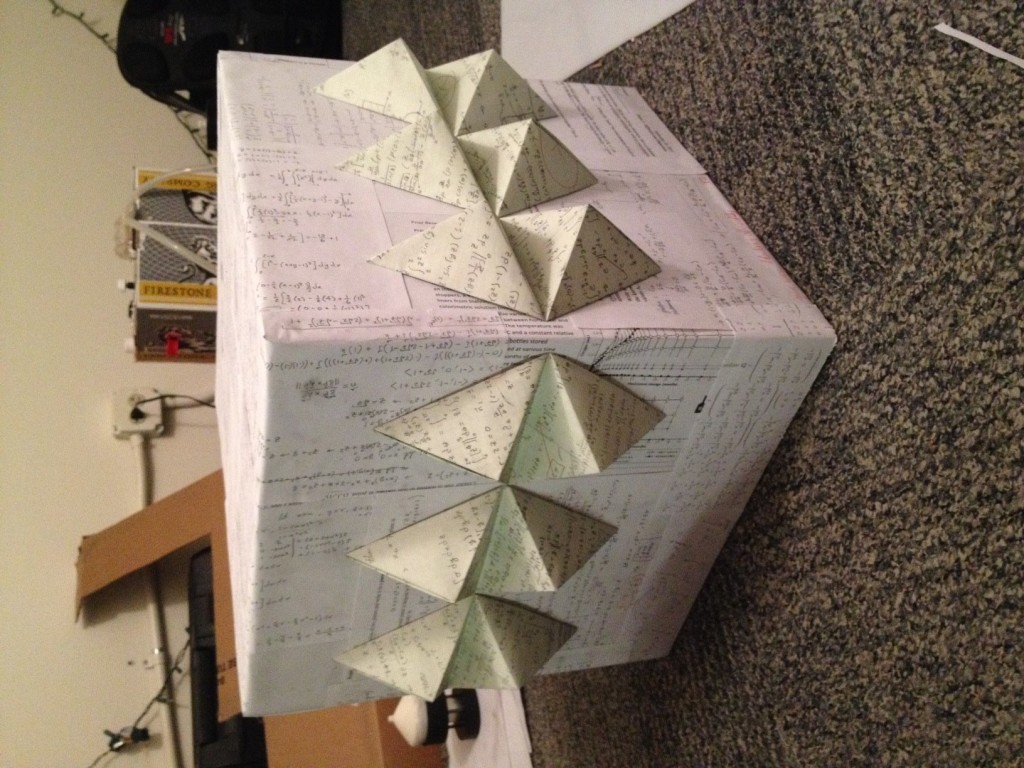 I wanted to design and create something useful for my upcycle project. I have wanted a nightstand for a while, so I decided to make my own. The desk in my bedroom is covered with stacks of homework assignments and exams from last semester, and I wondered if there was some way to incorporate old papers into my design. Origami was brought up in class once, and brought back childhood memories of folding paper cranes and boxes. So, I decided to figure out if there was a way to make a nightstand out of origami using homework assignments.

My first idea was to make a large origami box by gluing lots of paper together to form a giant sheet large enough to fold into an open box. The box would then fit over a cardboard box to form the nightstand. The first thing I did to pursue this idea was fold different paper boxes of designs that I liked from Origami-Instructions.com. I used 8.5” x 11” paper that I cut into 8.5” x 8.5” squares, folded them into the boxes, and then measured the resulting dimensions of the boxes.

The idea was to use the ratio of box height to original paper length to determine the necessary size sheet to make the desired size nightstand. I quickly decided not to make the nightstand this way after realizing that folding a large enough sheet of paper would be unwieldy and cumbersome to fold, and I would have one shot to make it work. As a result, I decided to take a different approach.

The new idea I came up with was to paste origami shapes into a pattern on a cardboard box. I went to Goodwill and found a plastic box that was about the right size for a nightstand.

The walls were not completely flat, so I cut pieces of cardboard to cover the walls and glued them using hot glue. For the origami pattern, I looked at different shapes for one that I liked, then I made a few out of sheets of homework. I found out that the shapes were not the proper size to cover the sides of the box. However, after messing with the shapes’ orientation on the walls, I came across a pattern that I liked.

To cover up the cardboard, I decided to glue pages from exams to the box. The white paper provides some contrast to the color of the engineering paper used for the homework. Three origami shapes were glued to each side of the box side by side using hot glue.

The design process was somewhat linear. It began with defining the problem, then ideation, researching, planning, prototyping, experimenting, and building. The iterative loop occurred from experimenting back to ideation before finishing the final product. This occurred when I realized that the original design would be too difficult to create.

Overall, the nightstand turned out better than I had imagined. The origami shapes are fragile and could easily be crushed. One solution might be to fill the underside with foam to add rigidity. The paper is also prone to getting wet, which could ruin the aesthetic of the nightstand. This could be solved by covering the top with a sheet of acrylic.