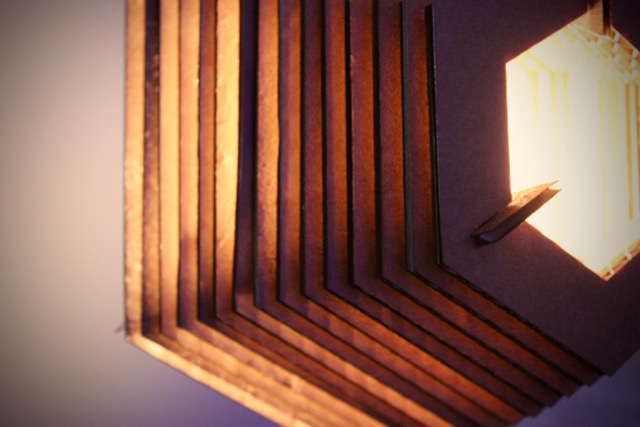 One of my primary gripes with most upcycling projects is that they often seem to leave behind just as much trash as there was before the project started- after sawing apart a bicycle, or stripping the components and plastic from some discarded tool just to use a component in the name of recycling, I thought I would look for a project that could effectively be made from things I’ve found in the garbage. In the building where I work, that garbage is largely corrugated cardboard, and it really is incredible stuff.

Like I might have mentioned in the project progress report, I have a thing for hexagons. I’ve put them in a number of other projects that I’ve built, like this light controller I built recently:

I wanted to play with the idea of tessellating flat hexagons into a type of hexagonal prism. Geometrically, this presented a number of challenges, until I ran into an interested lamp design that I found while searching the word “hexagon” in Google:

This lamp was for sale on Alibaba, but there was almost no mention of who designed it or where it came from. I decided to embrace a similar approach, but to use laser cut cardboard shapes instead of wood.

Most of the challenge in the design process came just from working out the geometry and dimensions of the overall lamp, which I did by starting with an initial dimension (8 inches), then taking the length of one side and dividing that by the thickness of the cardboard (0.15″). Then, I used Rhinoceros to draw half the number of hexagons needed to fill each side (in order to leave even gaps between each layer) and scaled them proportionally to meet the edges of the original “master” hexagon.

That last paragraph pretty much just exists to make this whole process sound really complicated, but in reality I just drew a shitload of hexagons in a computer and sized them until it looked right. That’s the short version. This is what the CAD file looked like once I added the notches to each hexagonal ring:

So then all that was needed was to take the large sheets of cardboard I had harvested from the dumpster, cut them to fit in the laser cutter, and then cut them out. Several times I made mistakes in aligning the pieces in the cutter, primarily because the pieces all ended up having bizarre dimensions after I cut off the packing labels, glue covered sections, etc. Once the cuts were done, I had a pile of hexagonal rings (which make great throwing toys, I might add):

Assembling the rings was obnoxiously difficult. Aligning the top and bottom sections provided a number of challenges. One of my goals was to assemble the lamp with no adhesives, simply using pressure fitting of the cardboard to keep things in place. While I was able to achieve this, the number of rings made it challenging to line up the top and bottom fittings. Ultimately, I ended up separating the bottom portion into two sections, which expedited the whole assembly. Which looks like this:

It’s hard to take a photo of a light fixture. Don’t judge me. I’ll try and take some better photos soon.

Initially I was pleased to have an extra week between when I finished the project and when I had to present, but this turned out to be more of a curse when I started having some serious structural issues with the lamp- most notably because I had only used two support pieces to keep the hexagons aligned, and they started to fall apart over time. As you can see here:

Instead of bringing that version to class, I remade the entire thing, redesigning it to have three lines of support rather than two- the lamp is much stronger and less uneven looking than in version 1. It also hasn’t broken yet, which is a plus.