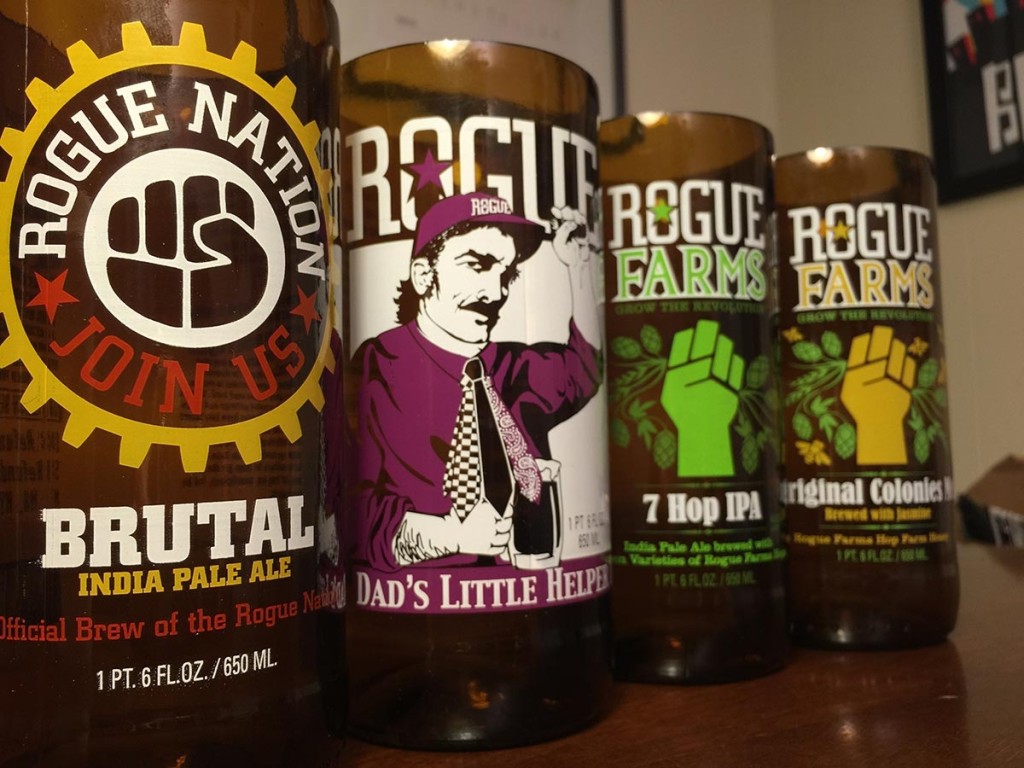 I decided to turn liquor bottles and spaghetti sauce jars into cups for my upcycling project.  The idea originally came from when my roommates and I did not have many cups and we started using old Prego sauce jars as cups.  Soon after we started to upcycle Prego jars I stumbled across a Reddit post where a someone used a glass bottle cutter to make cups out of old liquor bottles.  This is something that I have been interested in doing for a while but never got around to it till now.

This website used a different kind of glass cutter than the one I used.  Theirs was cheaper than mine, but more difficult to use and more time consuming.

The goal of this project was to make functional and robust drinking glasses that would seamlessly fit into the college environment.  Cups made from liquor bottles would also be a great fit in a bachelor pad and also for wine or beer connoisseurs.  It is a classy and awesome way to keep trophy bottles.

The cutting process was very simple.  First I started out by making what’s called a score line on the bottle using the glass cutter.  The glass cutter does not actually cut all the way through the bottle, it just makes a small fracture line on the surface.  I then heat up the bottle along the fracture line using a candle then cool it down in cold water.  This process expands and contracts the glass just enough for the fault line to permeate through the bottle.  After a few heating and cooling cycles I could hear the bottle cracking.  I then pulled the top and bottom and the two parts popped off.  Lastly I smoothed and evened out the lip of the cups with sandpaper and a little bit of polishing powder.

Step 2:  Use the glass cutter to make a score line

Step 3:  Heat up the bottle along the score line using a candle

Step 4:  Cool the bottle down in cold water

Step 5:  Repeat steps 3 and 4 until the two pieces separate

Step 6:  Sand edges down using sandpaper until smooth.  This step honestly took the longest. If I were to sell these I would invest in a belt sander which would greatly reduce the sanding time

I found that beer bottles were much easier to work with followed by the wine and whiskey bottles.  At the end I noticed that the spaghetti jars were made of thicker glass which explains why it took longer for them to make.  For the beer bottles it only took 3 or 4 cycles of heating and cooling and it took the spaghetti jars more like 8 cycles.

Overall, I think the bottles turned out great!  They are very functional and really cool to have.  I think these cups definitely fit into the college and wine connoisseur aesthetic, and a little into the beer drinkers aesthetic.  I saw that because the beer bottle cup looks a little bland.  At the time of this project I did not have any beer with a laminated label, just paper labels, which meant I had to take them off or they would fall off in the dishwasher.

The design process for this project was very linear with very few iterations.  It was a fairly straightforward, step-by-step process.  The only thing I took into account when designing how the final product would look like was how much of the bottle I was cutting off, resulting in the height of the cups.  I am not including a design loop because I would find it redundant for a project like this.

Another thing that would affect the design process for a project like this is whether to include the label on the bottle or not.  I removed the labels on these bottles because they were paper and would fall off when being washed, but if I had Stone or Corona I would consider leaving the labels on to add art to the cups.

I will most definitely keep and use these cups in the future, and continue to make more cups with different bottles to add to the collection.  One thing I would do differently is beer selection.  There are some bottled beers and other liquors that have really cool designs on them that would make for cool looking cups.