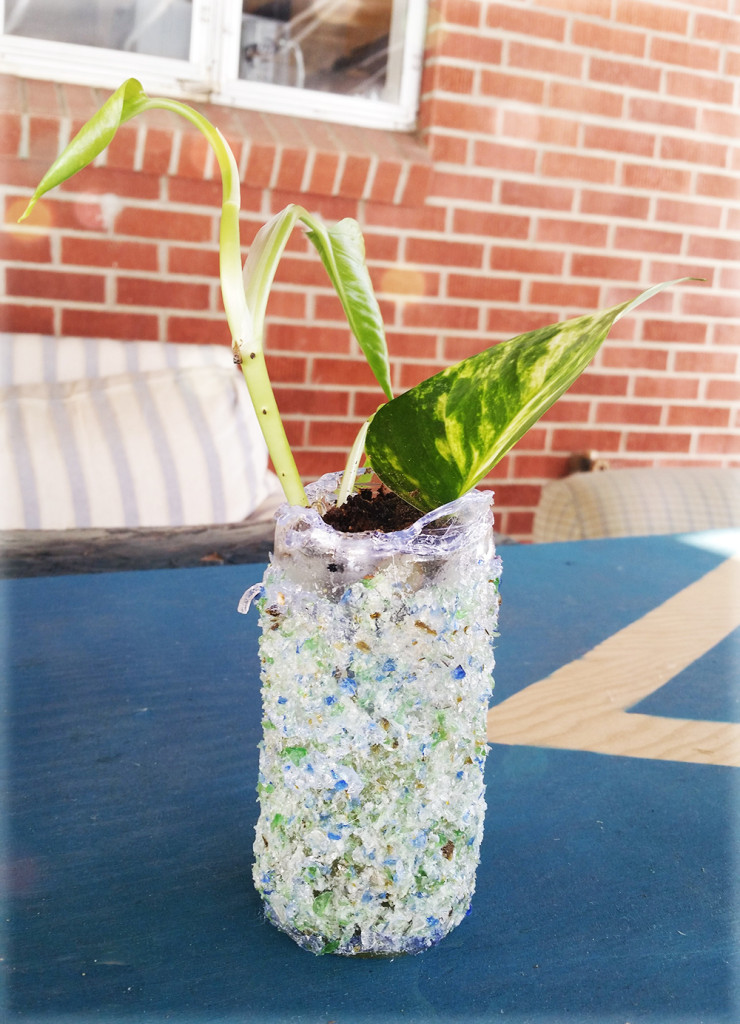 To all of those who read my original “planning” post regarding my upcycle project – you may have realized that while my project function has changed, but materials are kept the same. You’ll read about why I ended up making this change. And that change happened during my very loopy design process. Overall, my design process looked a lot less like the linear design my team wrote out and more like this:

Imagine this and then tripping through about 3 more cycles. THAT’S my design process.

My initial project idea was to ideally collect a several glass bottles of varying colors, smash them into much smaller pieces, and then drown them in glue to form a nice glue-glass tree. My inspiration was the glass because I thought that glass was beautiful in the way it reflects and refracts light, and there were so many different colors and idea to be had with glass shards.

The first part was simple: I collected the bottles, removed all of the labels, washed off the sticky residue with hot water, and air dried them.

I put all of the bottles together into several bags and took it outside where I literally bashed the bag onto the cement several times. The glass shards were all of decent size, but they were sprinkled with glass dust and miniature shards. My solution to separate the tiny and larger shards was to put the glass into a colander into a large bowl in the sink and basically sift it  until all of the small shards were washed into the bowl. My end result was two bowls of different sized shards.

I had no use for the small shards, but I didn’t want to just wash them down the drain since they were really pretty. I just left them on the side as I proceeded to begin my glass-glue tree.

As I began testing the glue that I bought, the idea entered the cold, sinking void of reality that it was not going to work. I had purchased 100 hot glue sticks and two E6000 tubes. The latter of the glues dries into a very nice clear glue which was why I had a preference toward that glue, but the hot glue would be quicker to dry. I had laid out strips of wax and plastic wrap outside and squeezed different globs of the E6000 glue (long strips, thin strips, thick strips) to test how well it dried and how easy it would be to remove from the surface in case I wanted to build them like pieces of wood. The result was that (1) even after 6 hours, even the thinnest strip of glue was still soft to the touch and (2) refused to budge from either surface. Basically, this idea was a no-go if I wanted to finish within a week.

I fell back onto plan B which was to do the same thing but use hot glue. However, I quickly learned that hot glue refused to budge from any surface as well, and it would take maybe like 200 hot glue sticks to achieve the mass that I wanted. Additionally, it wasn’t even very see-through so you could hardly see the pretty glass shards.

I resorted to my last plan which was to literally build the tree out of the glass shards by sticking them together rather than using glue as its strong foundation. I decided to try to use the tiny glass shards as a base for, say, a jewelry holder and the rest of the tree would be on top of it. About a fourth through, I took a hard look and decided: “NO”

Was all hope lost? Well… Not quite.

At this point, I thought, “hey, why not just cut the top off and maybe turn this into something other than a tree?” I had seen tutorials on the internet before where you could cut the top off glass rather cleanly using only acetone, a lighter, and cold water. The process basically was to wrap a string soaked in acetone around the bottle where you want to cut it, light it on fire for awhile, and then quickly dunk the bottle into cold water. The bottle should then just cut around where the string was.

It didn’t cut perfectly to my dismay, but it was workable. I juggled between two different ideas: either a candle or a plant holder. For a candle, I needed to purchase wax and a wick. However, for a potted plant, I could just turn the top upside-down and fill it with dirt. This idea would also allow for a nice separation between the water and the dirt. Plus, it would have a more upcycle feel compared to going out and literally purchasing more materials.

So ended up going with the potted plant!

Additionally, in my upcycle progress/planning post previously, I discussed possibly using an extra light-up earring I owned, and I added it as an additional perk to the pot, although it doesn’t perfectly match my aesthetic since the green drowns out the rest of the colors of the glass shards.

Overall, I think I achieved my personal goal of using colorful glass shards and my aesthetic goal of having pretty colors reflecting off glass. I wanted a home-y feel with an object that I could keep in my house. The snippets of ivy leaves growing in the pot adds the same aura of having a tree, so I’m personally quite pleased!

If I could redo this project, I would have first cut the bottle before applying the glass shards so then I could start again with a new bottle if the bottle didn’t cut cleanly (like in mine). Secondly, I could use a colored glass bottle rather than a clear bottle since the only reason I used a clear bottle was because I only had a clear one remaining after smashing all of my other bottles. Lastly, I would’ve used several more colors of bottles if possible, like red and yellow (which I’ve only seen in wine bottles, but I wanted to purchase as little as possible for this project.) I think I am personally inspired to continue cutting bottles and perhaps make a candle next time.

Also, you may be wondering the fate of the all of the large glass shards I accumulated. I plan on using them for another upcycle project, which is to melt them together and make pottery with them!

EDIT: I was stumped for awhile trying to figure out how to make the outside more safe-to touch. I was out of E6000 glue and hot glue does not dry in a way that matches its aesthetic (not to mention, it dries too fast to be spreadable). I tried spraying a coat of clear primer but it didn’t seem to do anything. I ended up purchasing a few bottles of clear nail polish and basically gooped it all over the bottle. Two full bottles were used as the outside coating! It’s still not as smooth as I’d like so I might add another bottle to the outside but at least now it’s not shedding glass shards and it’s still as shiny as it originally was!