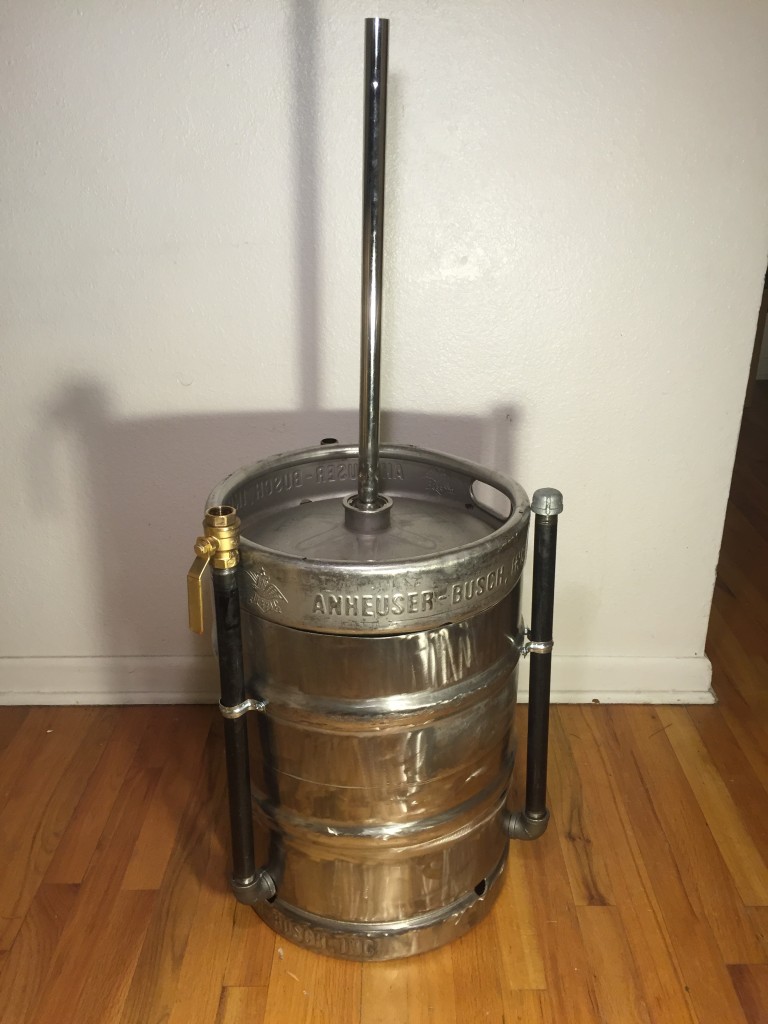 For the up-cycling project, I have decided to make a BBQ smoker out of an old beer keg. The reasons are making a BBQ smoker is simple really, I like good food and I like hanging out with friends. Smoking meats adds flavor while still allowing the meat to be very tender by cooking them for a very long time (a full rack of ribs could take up to 16 hours to cook).

I started this project, by looking at different types of smokers. I found that there are three main styles and many ways to make them from up-cycled materials. The three major types are show below:

After looking online at home-made smokers, I saw that the most common enclosures were 55-gallon drums and file cabinets. This gave me the idea to possibly use a keg as the outer shell. As it so happened, one of my friends had a keg that had been sitting in his backyard for a while (at least two years).

The primary end goal of this project was to end up with a smoker, but I didn’t just want an ugly thing sitting in my back yard belching smoke. No, I needed to make it look good as well. I really wanted to maintain the college/fun/party aesthetic of the keg but I also wanted to eat out of it too. All of the keg parties that I have seen are not the kind where I imagine enjoying really good ribs or brisket. I wanted people to think “Oh cool, you smoked this in a keg smoker” and not “Ew gross, this was cooked in that thing?”. Naturally I turned to google to find a look that would promote the emotions I was looking for. After a while, I stumbled upon something that might work; the look of brushed aluminum. This look is popular in more modern kitchens and kitchen appliances. Since the keg is aluminum, This would work great!

How it was made!

Upon receiving the keg, I deduced that there was still liquid in the bottom using a highly technical swishing technique. I was slightly afraid of opening the keg but it had to be done. The first step was to release any built up pressure by depressing the ball valve on the top. It was surprisingly less vomit-inducing than I was expecting and only smelled like extremely concentrated vinegar. The next steps were to pry out the locking spring and pull out the top valve.

I then took the valve completely apart and take out the inner spring that keeps the ball valve closed. As I was doint this, I found a new way of putting it back together so that the rod was sticking up and the valve was the same direction. After that, it was time to clean the keg, valve, screwdrivers… basically everything that had touched this keg. There was only one thing for the job: bleach…. lots of bleach.

To ensure that the bleach killed everything in the keg and the valve, I let the bleach sit for a full 48 hours. I really don’t want myself or anyone to get sick (or start a super-zombie virus) from eating anything that comes out of this smoker. I then cut off the top of the keg and a ring about half an inch below that. This was to let the top of the keg sit inside of the bottom section.

I proceeded to polish the outside of the keg with a flap-wheel on an angle grinder to try to get that brushed aluminum look. In the future, I would definitely polish the keg before cutting the top off. Polishing it after, was like doing a drum roll on a giant metal drum… or it was exactly like that. Either way, it was extremely loud and I would like to thank my amazing roommates (Emma and Roshan) for putting up with the extreme ruckus that happened. This took a lot longer than I was expecting because the outside of the keg was smothered in once sticky residue from labels. My next step was to make the one inch holes for the intakes. Not having a 1″ drill bit, I had to get creative (always a dangerous thing). My solution, seen below, was to drill a lot of little holes and hit the metal between them really hard with a screw driver.

I then reamed out my hole with a big 3/4″ drill bit until the intake pipe fit. After the pipes were installed, it was a simple matter of putting in the pipe supports and installing my two grates. The lower grate is extruded metal to hold the coals and the top grate is a grilling grate for a Weber grill. I ended up having to shim the pipe supports away from the side of the keg in order to get the lid to fit back on.

The design process for this project followed our design loop fairly closely. In blue was our group’s brainstormed design loop, and everything in orange was what happened in addition to this.

Alright, it kinda followed the design loop. There was a lot of activity between gathering materials, making a plan to use them, and executing that plan. The outside advice came from many places, almost all unexpected. One of these occurrences that was really helpful happened while talking to a home depot employee. He had built a smoker (“better than any store bought one and for a third the cost”) out of a 50-gallon drum that held apple cider. In addition to giving me a “killer” smoked cheese recipe, he recommended that I use three times the amount of air intakes. I also had a lot of help from my roommates, helping me think things through before I executed a plan.

Comparing reality to the vision…

Functionally, I am honestly not sure how this smoker will work. I have no reason to think that it wont work (except the whole winter thing that is going on…) so I consider that a success. I will update this after the Super Bowl and let you all know how it works.

Visually, I think that it did accomplish what I intended. I wanted something that looked very clean and presentable while still keeping the college/fun/party vibe about it. The air intakes definitely clue people into the fact that it is NOT a keg but I think that is alright. They don’t detract too much from the look of the keg. It was really hard to get the brushed aluminum look that I was going for because it was really hard to keep the angle grinder strait as I was polishing the outside. However, I think that the polishing that I did do looks good and made it look more like a clean, premium smoker instead of an abandoned two-year-old keg out of someone’s back yard.

In the future, I fully expect that I will have this for a long time and make many wonderful meals in it. I hope to continue to refine this project as I continue to use it. Right now, it needs to be broken in. I hope to do this by participating in The Great American Tailgate (also known as the Super Bowl).

However, even before its first use, I have come up with some items to add. The first thing that I hope to do is to put a second meat grate below the first one. This will allow for more smoking area or the possibility for a very tall smoked something (maybe a turkey for Thanksgiving?). I also want to include a couple of thermometers to be able to measure the temperature at the different levels.

The second major item to improve is the hole in the bottom. While putting the air intakes in, I was originally thinking of having one intake that exited to the bottom of the keg. I quickly discovered that the oblong hole in the curved bottom was not possible (only after I had started the hole of course). I am currently looking at something to cover this hole so I can better control the intake of air into the keg.