Bikes are a wonderful component to living in Boulder, as a capstone to the great infrastructure in the community I’d like to build something to hang my bike on. Something I love most about bikes is their simple mechanical design and tability to rebuild them. I think this behavior epitomizes upcycling and not just the bad play on words. I want to use unused bike parts to create a bike stand that displays the beauty of a bike like a piece at the Louvre. It also has a great similarity to dead animals on the wall, but without making a trophy of killing something. 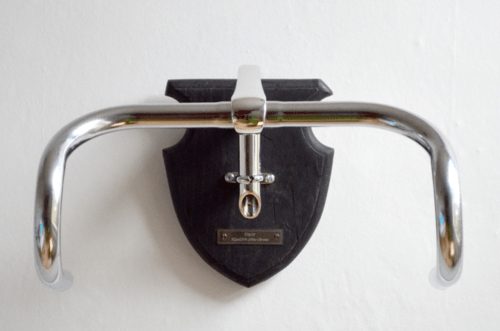 The end result looked similar but I made some additions and changes. I drew inspiration from my neighbor’s use of dead animals on their walls to decorate their home. I wanted to have a similar aesthetic but don’t have much interest in displaying dead animals on the wall. My piece is a critique on the southern Steer’s that often adorn walls as decoration. A noted inspiration is Georgia O’keefe’s work with inspirations of the desolate Southwest.

The design of this piece was surprisingly straight forward. Much of it depended on the standard dimensions of bike components which kept everything uniform. This is often where I can get hung up in prototyping or building so that kept the process linear. Besides trying out a few clamps there was limited rework or going back to earlier stages which gave a straight forward design process.

In this project I had hoped to give some wall art but also give an opportunity to hang my bikes on the walls as additional wall art. It doubles as an individual piece without a bike hanging but also has utility to hold the bike. That was the intention and the piece is definitely strong enough to support a bike. In that sense the design intent functionally was met. Additionally I would like to add softer bar tape to the inside of the bars as not to scratch any bike I do decide to hang from it. I would also like to change the clamping mechanism so it’s more flush with the back surface. Aesthetically, my intentions and hopes were exceeded. I think the white saddle gave a real analog to a bone feel and it has good contrast with the industrial feel of the metal bars.

I plan to keep the piece and will use it in my garage to go with the industrial feel. I am happy with the result and if I ever decide to use the components again I can do so. But while they’re sitting there, they have a function to holding my other bikes, and an aesthetic to inspire.