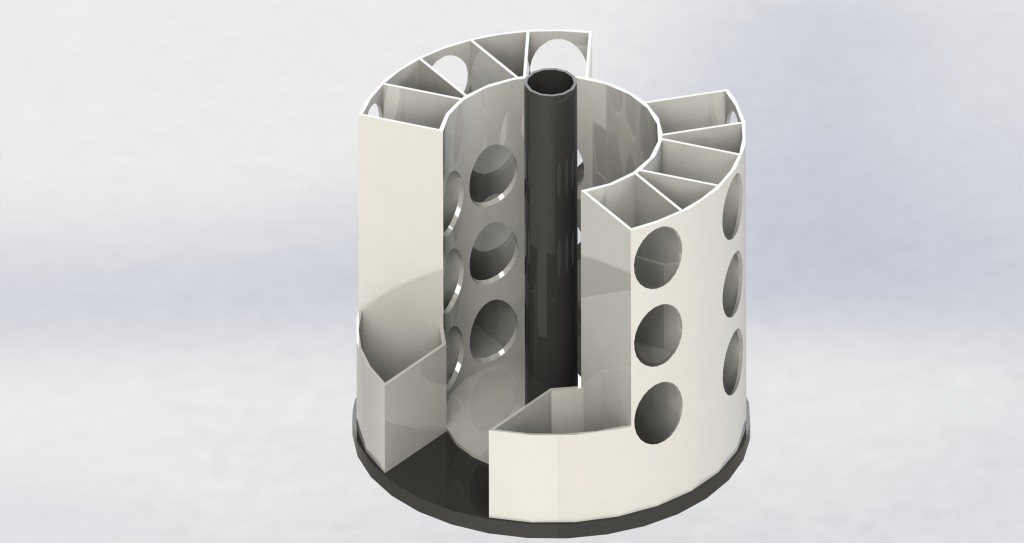 There have been 7 iterations of my design thus far:

The initial design combined the functions of both a spice rack and paper towel holder. I wanted the user to be able to spin the spice rack so that they could reach any spices on the rack without moving it. So a device similar to the rack between the spinning plate in a microwave and the inside of the microwave was suggested, realistically this is some sort of thrust bearing. The thrust bearing has not been clearly defined,but I am hopeful that it can be bought as a single part to reduce assembly time. The design had three parts: a cylindrical base that would have a track or spacing for the thrust bearing, the thrust bearing, and the spice rack holding section that would rest on top of the bearing. The top section could hold jumbo sized paper towel rolls and was a solid piece that was assumed to be a plastic material with possible metal version for upscale markets. This top section also included the post that paper towels would be placed over, reducing the tolerances that would be required if the post had to be inserted into the top rack through a hole.

The first redesign had multiple goals in mind. First, the aesthetics were altered to make the design more bulky. The idea was to match similar items that are currently on the market. Second, with some minor research, it was determined that there is no longer a standard size for a paper towel roll. Most paper towel rolls are the same height, but the diameter has been changing. Take the “Giant Rolls” by Bounty’s select-a-size campaign for example, which are said to be 150% of a regular paper towel roll (marketed as 8 Giant Rolls = 12 regular rolls). In the original design, a “Giant Roll” would not fit in the space provided. That would go against one of the main goals for the project, which was to eliminate some wasted counter space by combining the “lazy susan” spice holder with a utensil holder and paper towel holder.

I really liked the aesthetics and thoughtfulness of design iteration 2, but there was one major issue. The spice rack itself was projected to weigh over 21 pounds according to SolidWorks. The next iteration is focused on reducing the weight of the overall design. As seen in the figures below, design iteration 3 is literally a shell of its former self.

The top of the spice rack was redesigned at an angle to remove all of the excess material above the last row of spice holder holes. Even the rod that the paper towel roll slides onto was hollowed out to remove some excess material. Also, the utensil holder was combined into the spice rack, eliminating the removable utensil holder design. This change eliminated some spice holes, but the overall weight was decreased even further. Design iteration 3 decreases the total weight of the spice rack from 21 pounds to __ pounds.

In this iteration, additional utensil holding areas were created by removing excess material from the spice rack. This was in addition the removable utensil insert that fit in the center area. This provided a large utensil storage area that was also segmented, which is different than many utensil holding devices. This separation would potentially allow the user to sort their utensils by use or whatever system works best for them, something that appeals to us. The removal of that excess material also reduced the weight and the slanted top gave it a more upscale look.

At this time, it was decided that this product was just too large to be any kind of space saver. The diameter of the spice rack and base were both reduced to save weight and space. The design also reverted back to a flat top and the utensil storage insert was discarded. The additional storage holes in the rack were not added back in because they were thought to be too small with the reduced size. The paper towel holder can no longer hold a jumbo sized paper towel roll, because this is a space saving device, it is not designed for all sizes. Design has reverted back to a material dense phase, but the size reduction plays a big role in the decisions to come.

In this process,I had the idea of also making space in order to store bottles that would contain oil and vinegar – items that are commonly found when cooking. In order to accommodate for the new changes, a few spice holders were eliminated. A new improvement in this iteration was to remove the supporting structure for the spice bottles and replacing it with an additional hole in the inner diameter. Now the spice bottles would be inserted through the front hole and slotted until it rested on the hole inside. Thus using both holes to support the bottles from falling down. This new form decreased the weight of the structure and the needed material to create the mold.

Along with the previous design improvements, the paper towel holder was removed from the top mold and moved towards the base. The product still requiring only three parts for assembly but creating the mold would become an easier process.

In the final iteration created to this point, a few changes were implemented. Once again in order to lose material and reduce mass the wall thickness was reduced from 0.25” to 0.1”. The top of spice rack was removed leaving it completely open. As shown in Figure XX, the opening slots can be seen where spice bottles are placed and the other opening allow for utensil placement. The height of the oil/vinegar holders were also reduced to decrease material. With these new changes the weight of the spice rack is roughly about three pounds.

As to changes towards the base, a few ideas have been mentioned towards the new iteration. I am looking to add weight to the base in order for the design to have a lower center of gravity. This implementation would allow for the product to not topple over if it happens to be top heavy with the added kitchen products. Also, rubber feet/balls are to be added for stability.