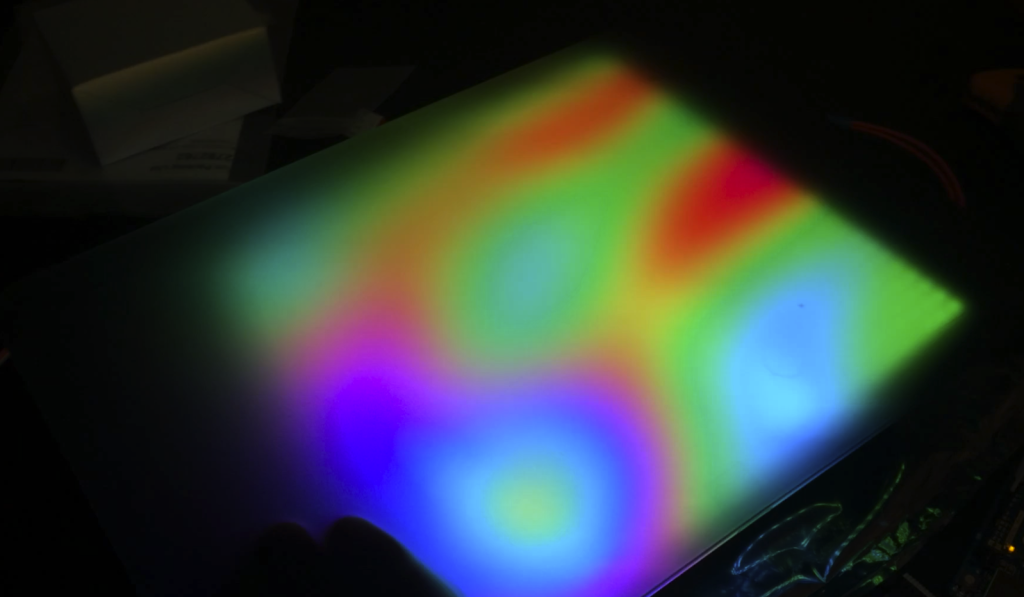 The panorama has been moving forward at a slow but steady pace. I’ve been making incremental progress, and as expected, I’ve begun to fall behind. Coding for the panorama has proved to be more of a challenge than expected as the pre-written code does not behave as I had previously expected. I’ve been working on writing my own functions to control the LEDs. Since my coding style tends to be more along the lines of “code a little bit, debug a thousand bugs, code a bit more, debug more, get tired, then give up for the day”, I’ve found it tough to finish the code and really dedicate the time needed to make it work. However, its getting into crunch time, so I have to kick it into high gear.

On another end, I acquired a Chronodot Real-Time Clock which plugs right into my Arduino so that I can pull real-time clock data and control the LEDs using that. This will hopefully allow me to control the LEDs so that they change with time and allow the sun to rise and set with the actual sunrise and sunset. I haven’t worked very much on this end as my primary goal is to get the changes looking pretty and to more meet my aesthetic goals than my functional goals.

I still have yet to order the wood, but will likely be opting for some wood from Home Depot at the moment. This is mostly due to budget and time constraints, as well as availability for if (when?) I screw up. I’m not as worried regarding the wood though since it shouldn’t be as buggy and time-consuming as the coding has been.

Aesthetics of the Project

I haven’t really discussed the aesthetics of my project over the last few weeks, but am going to delve a bit deeper. To me, aesthetics should evoke an emotional response, especially when part of an art piece, as my project is. Since I will not be living in Boulder after graduation, I want something that reminds me of the place that has been such a big part of my life over the last five years. I want something that reminds of the mountains and outdoor beauty of this place, as well as something that reminds me of the work that I have put in during school. For this reason, I’ve chosen to blend the natural with the electronic. The overall aesthetic of the final product should fit the rustic, outdoorsy aesthetic of wooden furniture and log cabins. The wood, as well as the depiction of the Flatirons should help to accomplish this. The main distinction comes from the LED panel, which, rather than creating a static piece of artwork, will make the piece dynamic by having a changing sky in the background.